With yet another nod to my idol Audrey Hepburn I enjoyed a jaunt to Rome just before Christmas. This proved to be a genius time to visit the city, whilst everyone was busy Christmas shopping we had free rein to explore all the key sites without queuing once. It was also perfect timing to catch a glimpse of a certain Vatican celeb (see last post). Whilst bumping into the Pope was undoubtedly the most memorable event of the weekend, this city is full to the brim with ancient icons I will remember for a long time. 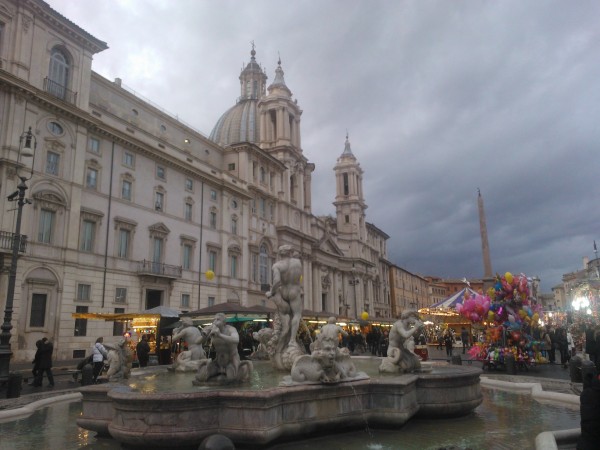 Entrance into the largest church in the world is free so that’s a lot of church for no pennies. Whilst the interior is spectacular the real treat is the view of Rome you are rewarded from the top of St Peter’s Dome. Taking a lift to avoid the first 200 steps we had no choice but to wobble up the remaining winding 300. At the top you may exit the dome and circulate it for 360 degree views of the city. The most jaw dropping view is from the front of the Basilica, peering out from behind giant Apostles, across the key-hole shaped entrance to the Vatican – said to be shaped thus to funnel the people into the Church. 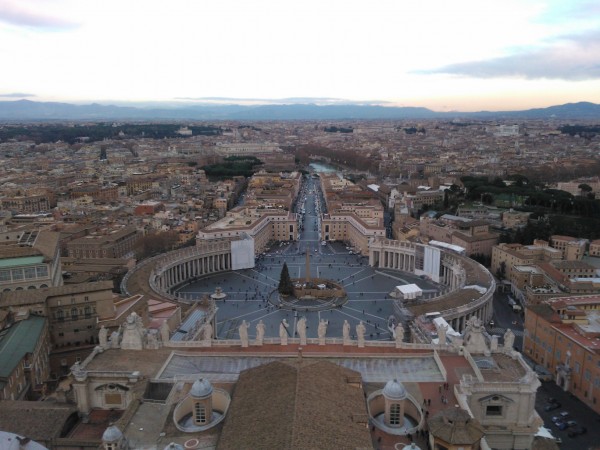 It’s a long walk through the Vatican Museums to reach the Sistine Chapel. Eventually you arrive in a stuffy, windowless room where talking and photography are banned and you may wonder why you bothered. Then you will look up and need to take a seat to just begin to take it all in. The fresco on the ceiling is a Michelangelo masterpiece which took years to complete and you should take more than a few minutes to observe, even if the walk there did take ages! 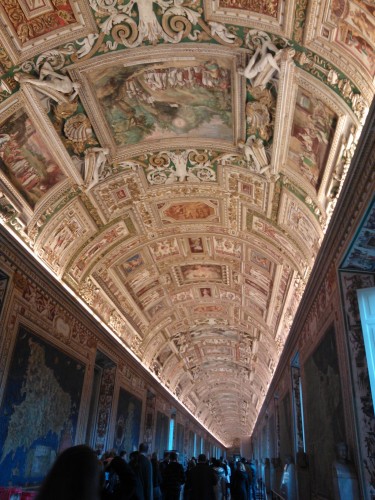 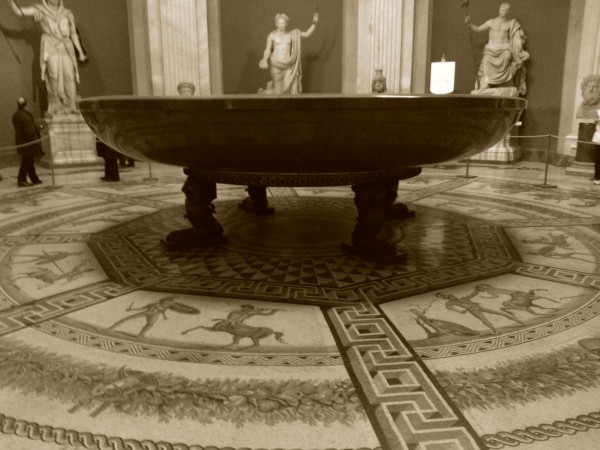 Ancient gems at the Vatican Museums

There is actually much of interest to observe in the Vatican Museums if you have the patience. If, unlike me, you can resist the urge to race through them and get to the famous bit, the Roman and Greek statues, medieval tapestries and maps are very impressive.

Even those with a limited imagination could easily conjure images of roaring crowds baying for the blood of muscled gladiators upon entering the Colosseum’s arena. Whilst not as large as I would have thought, it is more in tact than I expected – helped a little in places by sensitive reconstruction.

For vivid stories and more information on it’s history I would recommend booking an official guide. We learnt that Hollywood does not always get it right (quel surprise!) when it comes to gladiators. Scenes where the crowds are deciding a fighters fate often show people doing the thumbs down sign to signify death. This would not have been used in Roman times however, for to consign a gladiator to death, crowds would hold their thumbs vertically, signifying the man on the ground, as opposed to thumbs up which was to leave the man standing.
Our guide also pointed out parts of the Colosseum where crucial structures were missing, one side has almost no outer wall left. She told us these parts had been stripped to build other structures such as churches and to provide weapons to protect the Empire – the concept of preserving things for heritage sake is a relatively new one! 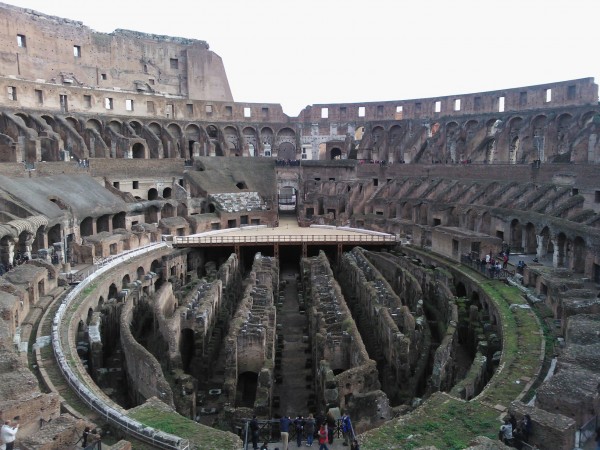 Just across the road and included in your ticket is the entrance to the Palantine and Roman Forum. These sites require a little more imagination – there is not much structure left in tact and the ruins are barely labelled – but definitely worth a wonder around none the less.

This was probably the only site in Rome that I hadn’t heard of and I wondered why I hadn’t when I found it. A huge, in tact, temple it gave me a feeling of the enormity and splendour of Ancient Rome like nothing else in the city did. This was also the only time I have been on a trip and wished it was raining, the giant, light-providing hole in the middle of the Pantheon roof is said to be spectacular when viewed in the rain. 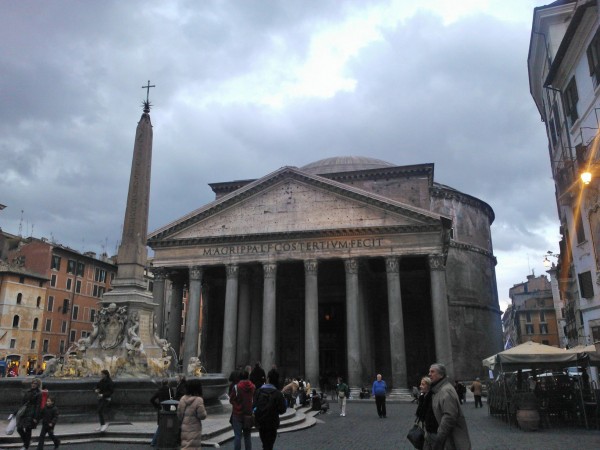 This aquamarine fountain, slap bang in the middle of the tacky tourist part of Rome, is inexplicably romantic. Like a homing device for love sick couples the site is busy day and night, and yet I was charmed rather than repulsed. (Maybe my cynical side is softening!) Completely underwhelming, however, were the Spanish Steps. There is not much one can say about a staircase apart from their proximity to one of the most beautiful shopping streets I have ever strolled along – Via Del Corso. If you share my love of sexy stationary then Fabriano is a must see – their notebooks decorated in maps of Rome are the perfect souvenir for travel scribblers. 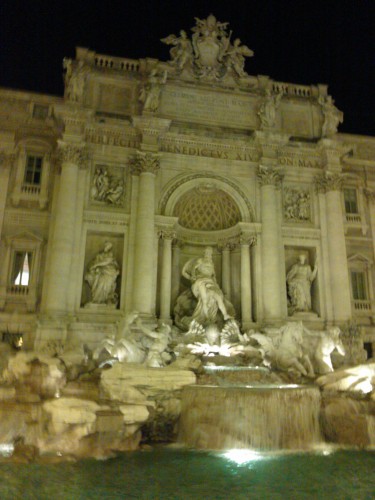 Historical and romantic Rome stole my heart and satisfied my belly – full gushing post on the food to come shortly!

We booked our trip through Easyjet Holidays. Visit their website for details. 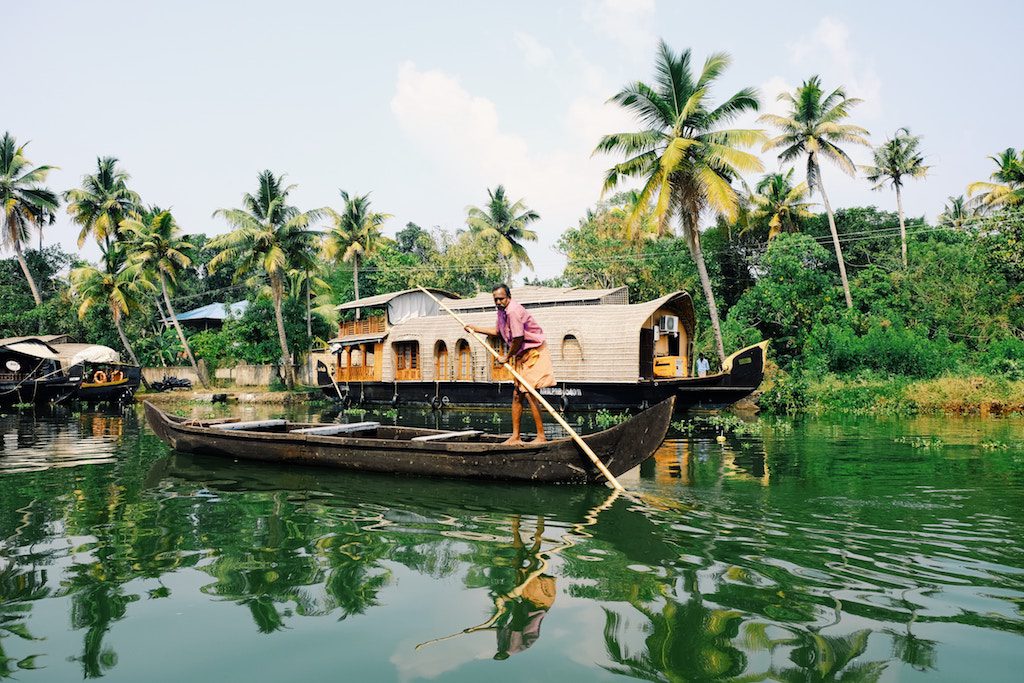 A Chic, Affordable Break in Madrid