Peering out of the taxi window as we departed the airport I was overly eager for my first glimpse. Like spotting the Eiffel Tower in Paris or the first sighting of Big Ben in London, I couldn’t feel like I had officially arrived in Toronto until I saw its tower. The CN Tower was built by the Canadian National Railways in 1976 and today is used as a broadcast transmitter as well as a climbing/dining/entertainment venue. At 1,825 ft (plus 5 inches to be exact) it is the world’s tallest tower and not long into our transfer it soon sprung into sight, it’s not hard to miss! Whilst visiting Toronto for Fashion Week I became obsessed with photographing the tower, a habit fed by the fact that I was staying right beneath it and was treated to a meal at the top of it.

Like Jeremy Beadle the tower pops up in places you least expect it and demands attention. Hanging out in parks on West Queen West, appearing at the end of a busy street Downtown and poking out from under an iron bridge, the tower catches your eye and captured my imagination. 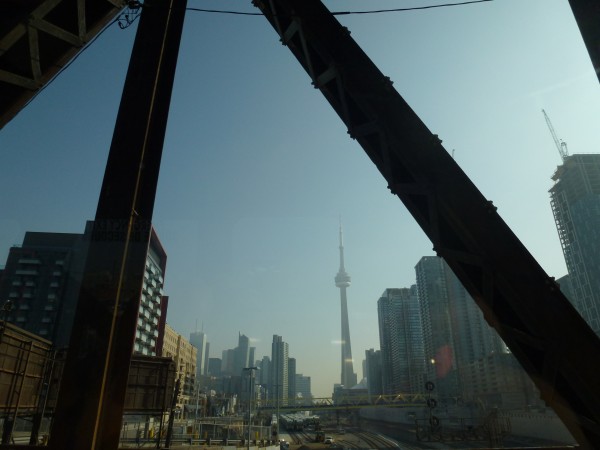 Nowhere was it better framed, however, than by my bedroom window at the Hotel Le Germain Maple Leaf Square. The boutique Germain is located slap bang in-between the Air Canada Centre and The Rogers Centre, and on one side of the building guests can lay claim to a direct view to the CN Tower from their bed and bath. Despite its buzzing Downtown location the hotel is a haven of calm, which deems the ear plugs they provide on the bed each evening redundant. Not redundant in this hotel is the attention to detail in the rooms; iphone docking station, plug socket and light controls (from ‘ambient’ to ‘all off’ ) within easy arms reach of the bed. And boy what a bed. Huge white pillows, a snuggly duvet, perfectly soft mattress and a fit man hanging above it – BEST BED IN THE WORLD I say! In the bathroom you will find FULL size Molten Brown products and a rainforest shower from which you can view the giant flat screen TV in the bedroom. Together with a hair dryer that actually dries hair, a full length mirror in a place that makes sense and Nespresso machine on the desk, you feel like this hotel has really thought about its guests. They also provide something all hotels need to wise up to – FREE, super-fast WiFi throughout the whole hotel – no password necessary. 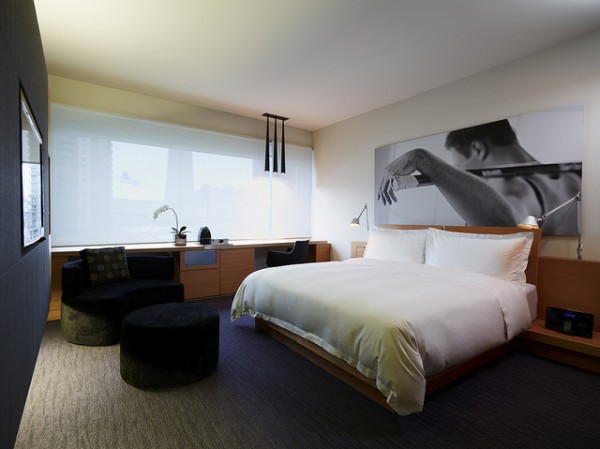 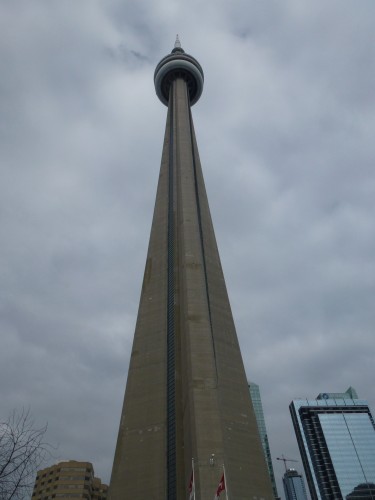 And then I got to go up it!

After peering at its bottom all morning, I was so excited to be going to the top of the CN Tower for lunch. 360 The Restaurant at the CN Tower is a revolving restaurant 1,151 ft above the ground. The restaurant takes 72 minutes to make a complete turn, so over a 3 course set menu lunch we discovered a new part of the city with every dish. Starting with a Caesar salad accompanied by the chef’s special zingy drizzle, moving onto a chunky cheese stuffed chicken main and finishing with a chocolate torte tower, the tasty wholesome food certainly held its own against the allure of the view. The Lunch prix fixe menu costs $52 and includes free elevation (with access to the glass floor and observation deck) and you get to bypass the tourist queues to the top – worth every penny in my opinion. 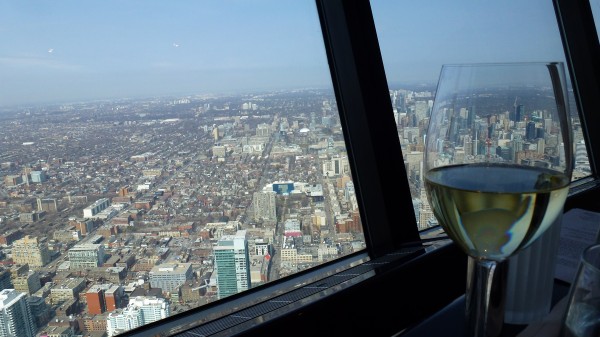 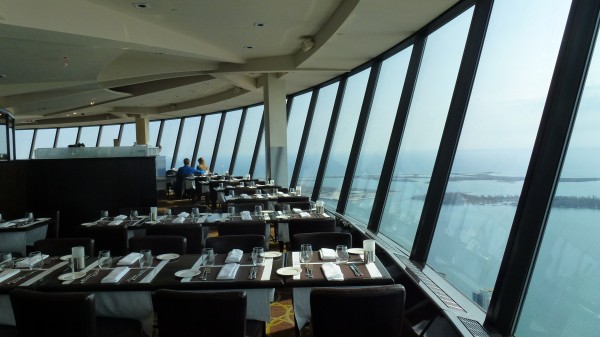 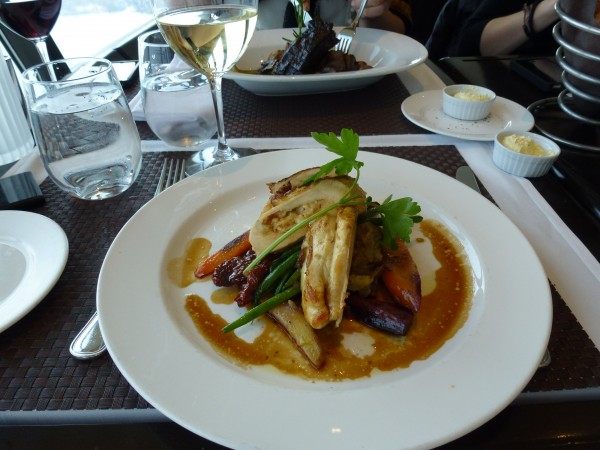 Viewing Toronto from the top of the CN Tower is breathtaking, but also a little disorientating – it is very odd to view a sky line missing the key structure.  The restaurant staff know the view well though and can point out key parts; sports stadiums, the islands, beaches and airports. They are also good to point out what section you are seated in as you arrive; as the central part remains fixed and your table revolves it is easy to enter the bathroom and find everything in a different place when you exit. Stationary in the middle you will also find the world’s highest wine cellar, the restaurant manager took us for a tour of his very expensive collection, regaling us with details of the emergency procedure should the tower suffer a power cut. 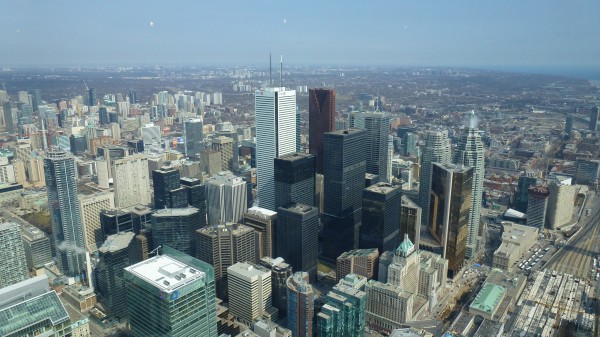 You can do more than eat at the top of the CN Tower. Travelling a further 33 floors up from the restaurant you can do a 360 (covered) walk around the top in the Observation Deck. Nearer the restaurant level you can find some sections of floor made of glass for those who fancy a direct view all the way down to the bottom. But for the really brave (read insane) there is the recently launched Edgewalk. As terrifying as it sounds the Edgewalk is literally a walk around a rail on the edge of the tower. In the words of the website: ” It is the world’s highest full circle hands-free walk on a 5 ft (1.5 m) wide ledge encircling the top of the Tower’s main pod, 356m/1168ft (116 storeys) above the ground.” It wasn’t open when I was there or else I totally would have done it – that’s the line I’m going with anyway! It’s an extremely popular attraction with a waiting list for some dates, so if you are tempted, book yourself in now. 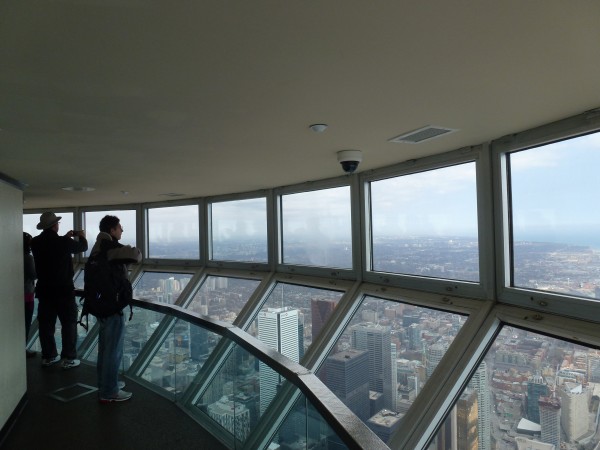 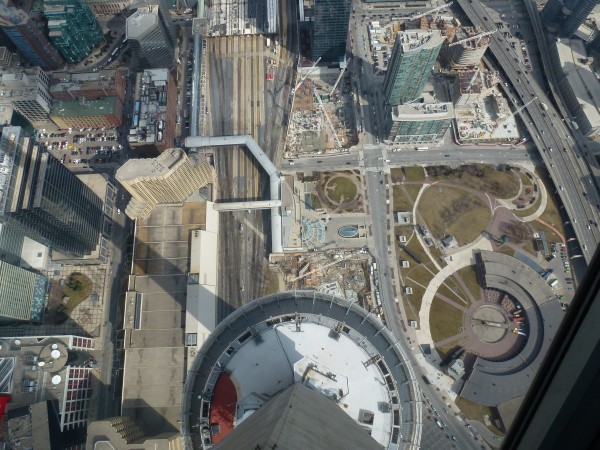 I was invited to Toronto by Toronto Tourism. For more information on the city’s sights visit their website. For more details on Toronto Fashion Week, vintage shopping in the city and the amazing Kensington street art – watch this space 🙂