I could hear what sounded like music and clapping coming from a marquee on a barren patch of land.

“Do you go to church?” asked our Soweto guide.

I was taken aback by the question but answered honestly, “Not lately.”

He laughed as if I’d made a hilarious joke.

“Let’s go in,” cried our second guide from Cycle Soweto who was at the front of the group. We all peddled furiously up the hill towards the tent and turned off the road, riding right up to its fabric door.

Loved the immersive experience of cycling around Soweto #newsouthafrica #joburg

“This is how we do church in Soweto,” said the first man, and he led us inside.

This was my second visit to Soweto, Johannesburg’s well-known township. I hadn’t known what to expect on my first visit, hadn’t imagined the neat rows of houses I’d find and only skimmed the surface of Soweto’s tragic history on my drive-by coach tour.

But this time around I was on two wheels, exploring the settlement via my own pedal power, riding alongside giddy children and, now it seemed, attending a Sunday church service.

Inside the tent was sweaty and airless but spirits were high. The stage was bursting with talented singers, the audience were on their feet – dancing, applauding, rejoicing. I had never seen anything like it.

The Minister welcomed us all individually with a firm shake of the hand and then guided us to an empty spot, just right of the stage. I tried to pick up the infectious dance moves and failed miserably, settling for an awkward foot tap instead. At the end of one song the congregation tried to sit down.

“Get on your feet,” the preacher cried as the band broke into the next song.

I laughed in sympathy; the seats did look inviting.

“They can go on like this for up to 3 hours,” our guide whispered in my ear. I looked at him wearily at the mere thought of it.

“Shall we continue the tour?” he offered. 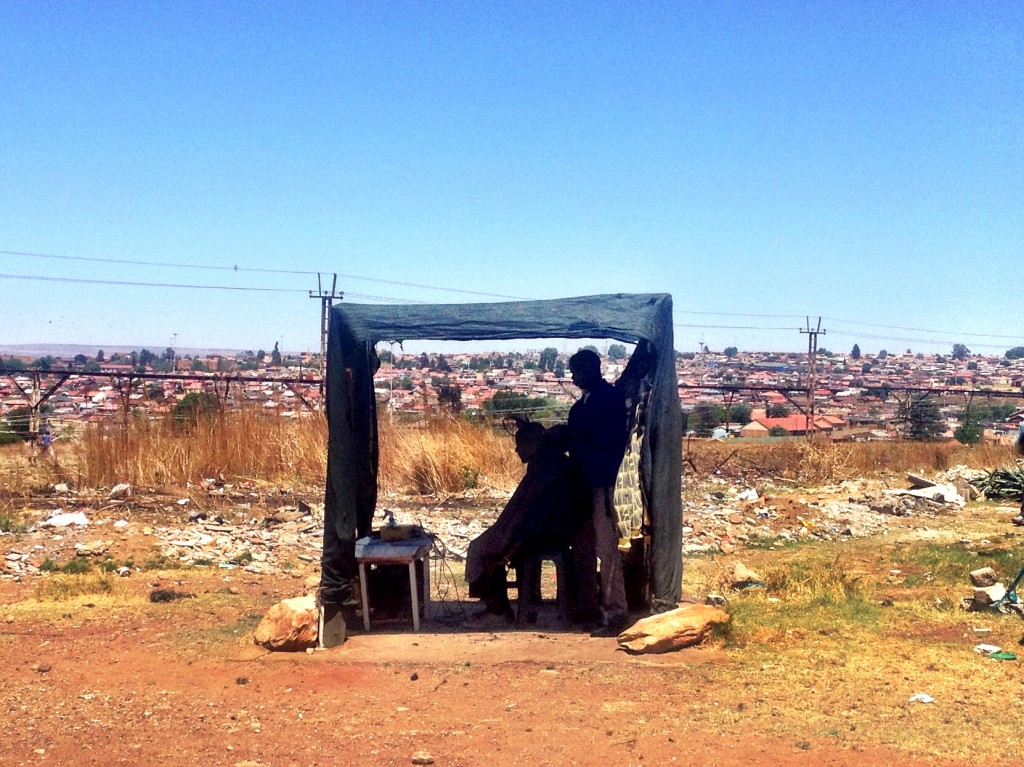 There are three tiers of housing type in Soweto – first, second and third class. The church we had visited was in the neat streets of a second-class area; where homes were small but well cared for. Several generations would live on one plot of land, we were told, although recently younger generations have been moving closer to their jobs in central Johannesburg and renting out their homes in Soweto.

“People don’t sell their Soweto homes because they hold memories for many families, but also, you know, just in case.”

The group is left to ponder that thought.

Soweto (short for South Western Townships) began as a labour camp, a place to house mainly black males who worked in the mines. In the 1950’s, under the laws of apartheid, black families were forced to relocate here, 20 kilometres away from their jobs in the city centre and far removed from the areas reserved for white people.

Today, the segregation laws of apartheid have been torn down but Soweto remains a largely black settlement. There is a strong sense of community here, but also, I worry, a sense that people feel safer remaining in the township,’ just in case’. 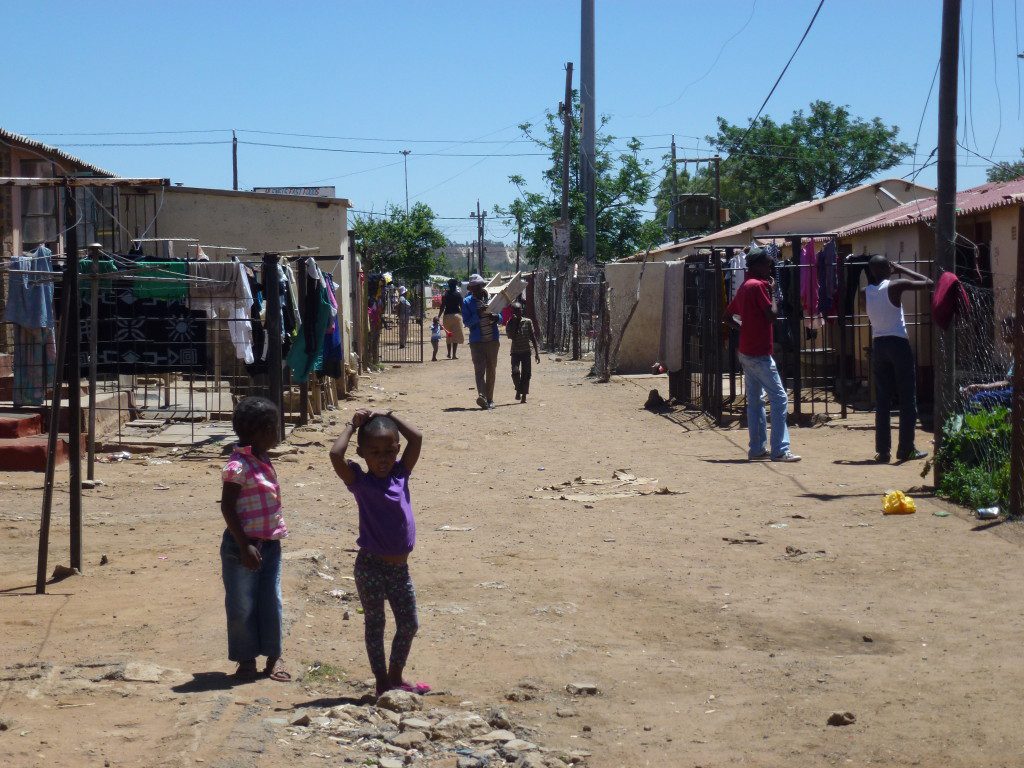 Soweto has also become home for refugees fleeing areas of Africa in turmoil. The area surrounding an old cinema, known as Four Square, has become an informal settlement; rusty car roofs and corrugated iron sheets for houses. We are told to leave the bikes on the ground so we can take a walk around.

Just behind the metal fences our guide stops to tell us more about how people came to live here. We are interrupted by a man who comes out of his hut and shouts at the guide. I feel uncomfortable – is he telling us to go away?

“I’m sorry,” the man then says in English to me, “he just wants to say hello.” He points to a young barefoot boy who has been standing by my side all this time without me realising.

The man prompts the boy and the boy takes the thumb he has been chewing out of his mouth and extends a gooey hand to me. I shake it.

“Hi there,” I say. The kid looks chuffed. Our guide picks up where he left off.

We are a fascination to children in most parts of Soweto. As we peddle down quiet streets they appear from nowhere squealing, “Shoot me!” (in a photographic sense!). The boys all want to high-five us; the girls are like budding models, poses pulled as soon as they spot a camera lens.

We are welcomed in all the contrasting areas of Soweto. We ride from wide clean streets to unpaved areas, sewage and waste splashing up from the bikes’ wheels.

In an old male miner camp, a so-called third class area of living, we are invited into a shebeen to try a home brewed beer.

Shebeen is an Irish name for an illicit bar or club where alcohol is sold without a license. In Soweto it is a shack we are invited into to drink from a bucket with a group of relaxed-looking men. The bucket, which has seen better days, sits in the middle of the unlit room, filled to the brim with frothy liquid. We are invited to take a sip. Gingerly I lift the liquid to my lips, swotting away curious flies. It tastes surprisingly good. 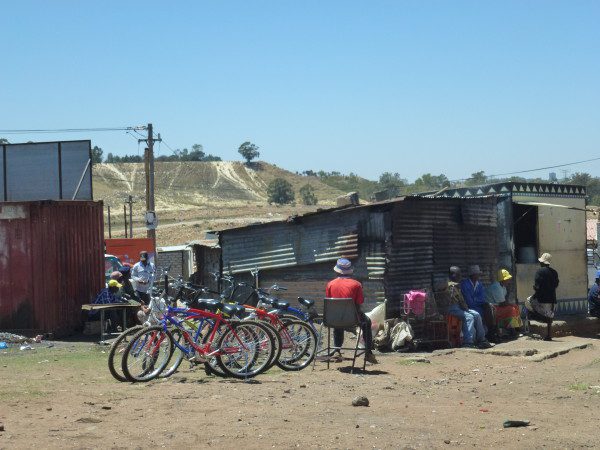 The last part of our tour takes us to the ‘Beverly Hills’ of Soweto, an area of first class housing in the hilly part of the township (hence the name).

Soweto has been the home to two Nobel peace price laureates, including Nelson Mandela himself. His old home on Vilakazi Street is now a museum surrounded by restaurants and hawker stalls selling trinkets for tourists. The restaurants’ patios are filled with customers – local and international. The scene is so far removed from the ones we have seen earlier today, and yet all of it is Soweto.

Just around the corner is a haunting reminder of Soweto’s past. The Hector Pieterson Memorial and Museum commemorate the role of Soweto’s students in the struggle against apartheid. In 1976 the Soweto students led a protest against the introduction of Afrikaans language in schools that spread across the country.

More than 550 people lost their lives during the resulting uprising, including 12-year-old Hector Pieterson who was shot in Soweto. A photographer who was covering the riots captured on camera high school student, Mbuyisa Makhubo, attempting to carry the limp body of Hector Pieterson to safety, Hector’s terror stricken sister running alongside them. This image has become a symbol of the oppression of apartheid as well as the role of Soweto in bringing it to an end. It is blown up large outside the museum.

Soweto is not just one township it is 47. It covers 144 square kilometres and has a population estimated to be over 3 million. It encompasses not one way of living but several. It’s a self-sufficient city, with a university and 2 hospitals to its name. But despite its vastness, across its 3 tiers of disparate wealth, you get the feeling it is but one community.

Cycle in Soweto is run by Busi Khambule – the first and only female to run a bike tour company in the township. Visit cycleinsoweto.com for more information. 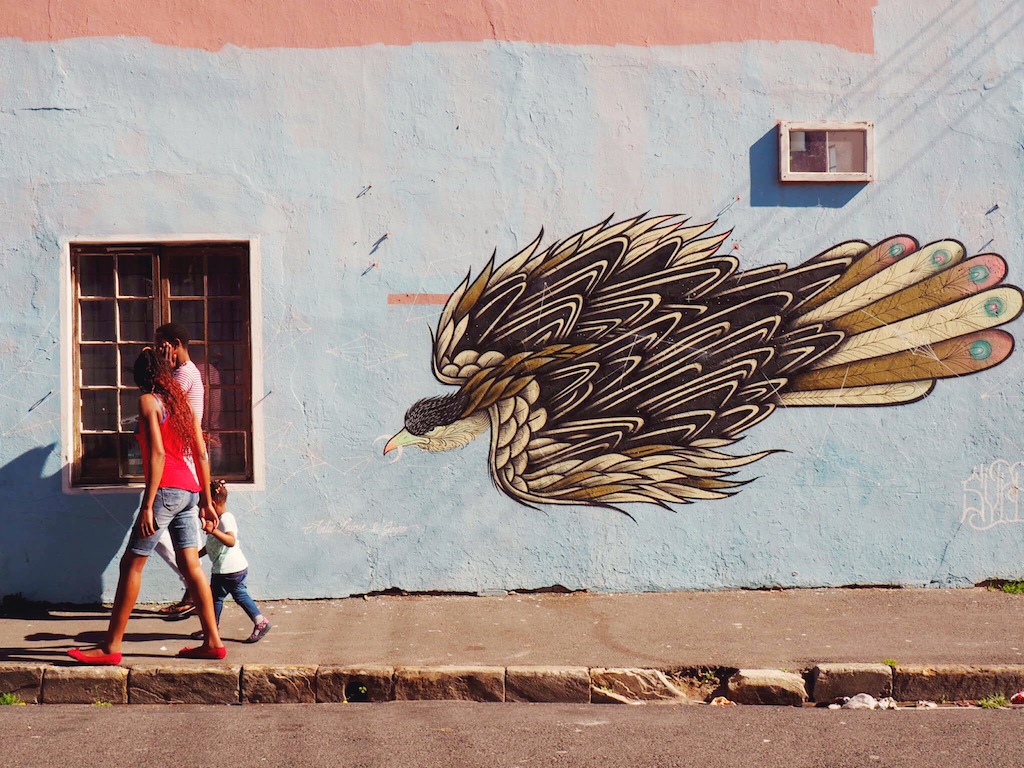