If you’d told me in advance that I would ride 22km in one day I’d say, ‘Nope, no way, these sausage legs can’t do it.’ So I can assure you that no one was more surprised than me when Justin checked his tracker at the end of our day trip to Rottnest Island and told me that’s exactly what we’d achieved. If only all physical activity was as fun as this!

I’m not the most adept cyclist. Despite owning bikes in both London and Sydney, I’ve had more crashes than successful rides on them. Within the first week of buying my retro blue bike in Sydney I was involved in a head-on collision with a kid on a scooter that left me a little, shall we say, shaken. But they say the best thing is to just get back on that bike, and Rottnest seemed like a good place to do so.

What to do on a day trip to Rottnest Island

Rottnest Island, a protected nature reserve off the coast of Perth in Western Australia, is very well set up for riders. There’s only the Explorer Bus and the odd service vehicle on the roads, so most visitors to the island choose to explore by pedal power.

There are 3 suggested rides you can take around the island, the longest of which will take you on a full 22km circuit. Taking into consideration my (lack of) cycling skills and the fact I wanted to stop, photograph and soak up some of the scenery rather than race around the island before catching the boat back to the mainland, Justin and I made the decision to start with the smallest ride (a 4km loop) and see how we got on from there.

We set out from the bike hire shed (my unnecessary extra layers strapped to the back of Justin’s bike using the inner tube from a tyre as I’d foolishly assumed the bikes would have baskets) and followed the signs towards Bathurst Lighthouse.

We cut around the back of the Settlement, wondering how long it would take before we would see our first quokka, when suddenly a spritely rodent ran across the road in front of us. As I’m now well-versed with small humans/animals trying to take me down I swerved easily but poor Justin was left with a look of horror on his face as he braked and panted, “I nearly hit a quokka’.*

We hopped off the bikes to take a closer look and found a whole family of cute-faced quokkas, dubbed the ‘happiest animals on earth‘, munching some nuts outside the local police station.

Despite having a rat-like tail, the quokka is actually part of the marsupial family. Quokkas are native to Rottnest Island and there are an incredible 10-12k of them estimated to be living here.

Interesting fact: The name Rottnest, meaning “rats’ nest,” got its name from a Dutch sea captain who observed the animals here in the early 1700s and dubbed them “a kind of rat as big as a common cat.”

Close up, they are much cuter than the giant rat description denotes – we just weren’t expecting them to run out of the bushes at us!

Quokkas rocked the internet a few years ago when visitors to Rottnest discovered they take hilarious selfies, but let me interject at this moment to share with you – taking a quokka selfie is not easy.

Actually it’s pretty much impossible if you don’t have long arms/a selfie stick, or if you run away every time a quokka comes close to you. (Have I mentioned I’m not good with animals?)

Despite having gorgeous faces, the quokkas, are obviously, not as snap happy as us humans. They are, in fact, considered a vulnerable to extinction species and as with all wild animals it goes without saying that feeding, touching or harming the animals in any way is prohibited.

I preferred to give the viral sensations a little space and just took photos of their cheeky faces with a long-range camera lens. I did see some people rolling around in the dust trying to get what was probably a very funny shot though.

Bathhurst Lighthouse and The Basin

Having met some of the island’s famous residents we got back in the saddle to check out some of the famous sights. Bathhurst Lighthouse and The Basin it overlooks were immediately recognisable from the Instagram photos I’d pored over prior to our trip.

The Basin is one of the most popular swimming and snorkelling spots on the island due to its shallow waters, teeming marine life and proximity to the main jetty. As we were visiting in winter we didn’t brave the water but it did look tempting despite the chilliness.

In next to no time the short cycling loop we’d chosen bought us back to the Settlement and as it was approaching lunchtime (and we’d come wholly unprepared without provisions) we decided to stop for lunch before tackling another corner of the island.

Falling into seats outside Dome Cafe, Justin and I filled up on all day breakfasts and extra large coffees while discussing what to do next.

Feeling encouraged by how manageable Ride 1 (4km) had been we decided to take on the bulk of Ride 3 (22km), determined to reach Parakeet Bay as someone had tweeted over lunch that we mustn’t miss it.

Weaving around the Island Explorer Bus and a black snake I mistook for a twig, we thoroughly enjoyed the ride around the south side of the island. The route was largely flat and if I did struggle with any incline at all it wasn’t a problem to stop and catch my breath while checking out a shipwreck, pure white sands or the outline of Perth CBD in the distance. 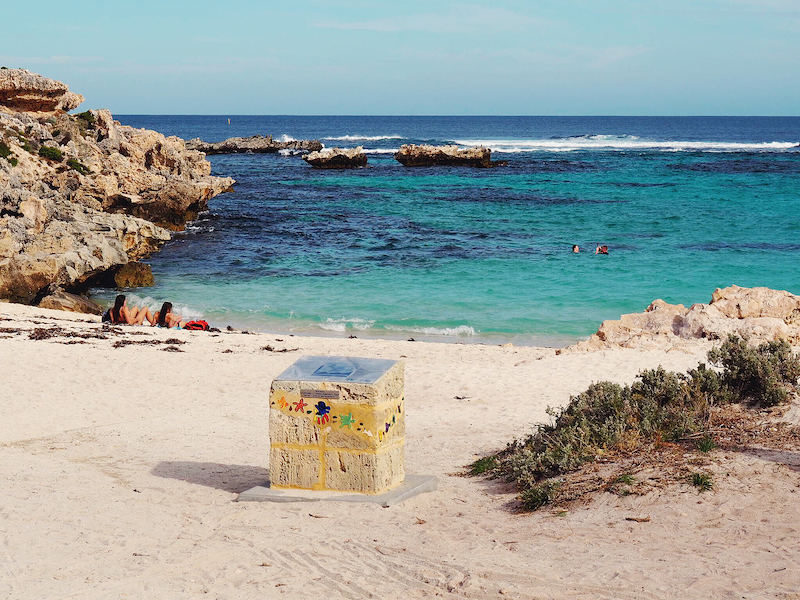 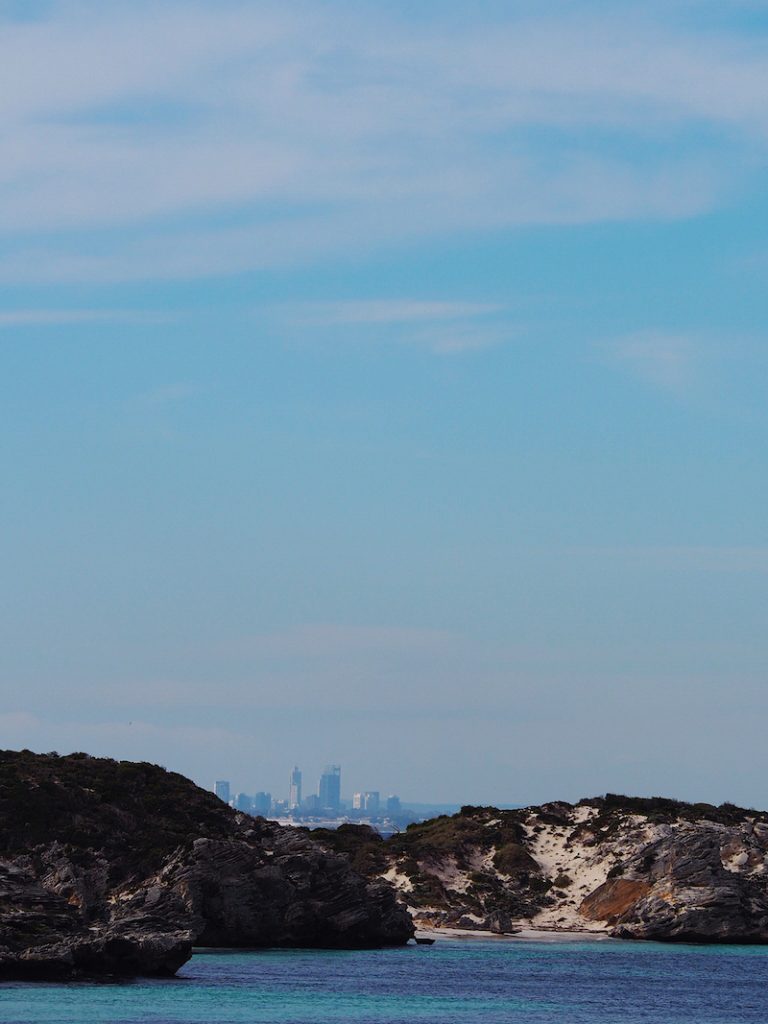 With just an hour left before we had to return the bikes we made it to Parakeet Bay and it was as pretty as the tweeter had described it. The final stretch back to the Settlement, however, was what truly wowed me. In the middle of the island are a number of salt lakes and one of them, at the right time of year and day, turns bright, bubblegum pink.

How lucky were we that the right time was just as we were riding past it?

Getting To Rottnest Island

We took the Rottnest Express from B-Shed, as it’s the fastest way to get to Rottnest and the departure terminal is an easy walk from Fremantle train station. The ride takes just 25 minutes and was a bit choppy on the way over. (Luckily we were on land before you can say ‘seasickness tablets’.)

Return fares cost approx $79 per adult. Check out the website for offers.

Bike hire is available from Pedal & Flipper and costs $30 for the day (helmets, locks and route maps included.) The hop on/ hop off Island Explorer Bus costs $20 per adult.

If you forget to pack snacks there are plenty of places you can buy food from in the Settlement – including the Rottnest Bakery, which is famous for its meat pies.

There is accommodation available on the island but we chose to stay in Perth in a gorgeous boutique hotel I scouted online called Alex Hotel. Discover some great places to visit in and around Perth here.

Our ferry tickets to Rottnest Island were provided on a complimentary basis. All opinions are my own.

*We weren’t speeding and this encounter has been hammed up a little for the story. Ride responsibly people!

3 Holidays In 1 – Greek Island Hopping In The Sporades

Time To Say Goodbye... To Sydney