On the second leg of my fantastically long journey from London to Sydney this week the upgrade gods shone down on me.

After I hadn’t slept much on the first 7 hour leg from London to Abu Dhabi I set about to see if anyone in Abu Dhabi airport could help me upgrade from economy using the frequent flyer points I’d accrued on the outbound trip. (FYI I’d tried do this online in advance but it’s not possible to do so on this route with Virgin Australia. I’d also tried to do so over the phone but couldn’t get through from the UK. I’d also asked in London at check in but was told as my first leg was with Etihad I could only upgrade using Virgin Velocity points at Abu Dhabi.)

At Abu Dhabi airport, after some misinformation, I went back and forth from the transfer desk to the lounge twice trying to find someone who could help me. Eventually I was told that it was only Etihad frequent flyers who could upgrade at this point but if I went to the gate an hour early there might be someone from Virgin Australia who could help me there. With nothing to lose I traipsed to the gate and approached the staff there with my request. The two team members (in Etihad uniforms) smiled kindly as they shook their head and said no, it’s not possible to upgrade using Virgin Velocity points on the Virgin flight I was about about to board. (Doh!)

“But is that a Gold card you have?” she said, spying the Gold status membership with Virgin Velocity I’d been very lucky to win in a blogging contest last year. It turns out that economy was oversold and they were looking for Gold and Platinum partners to upgrade free of charge. Out of her machine popped a new boarding pass with premium economy seat 12G written on it. Result!

My Gold status meant I could get access to the Al Reem Lounge at Abu Dhabi airport. (Note: VA premium economy passengers do not get lounge access on international flights.) Etihad have a very swish Business Lounge with a la carte service and a spa but this is reserved for business and first class passengers and Velocity Platinum members only.

The Al Reem lounge (run by Plaza Network so you can also pay to enter) has a good drinks and buffet selection, decent Wi-Fi and showers (although only 1 in the ladies toilet so you may have to queue). I recommend you ask for a coffee from the bar as it will be barista made and far better than anything that comes out of the machine. Alternatively try the bubbles, which are available 24/7! 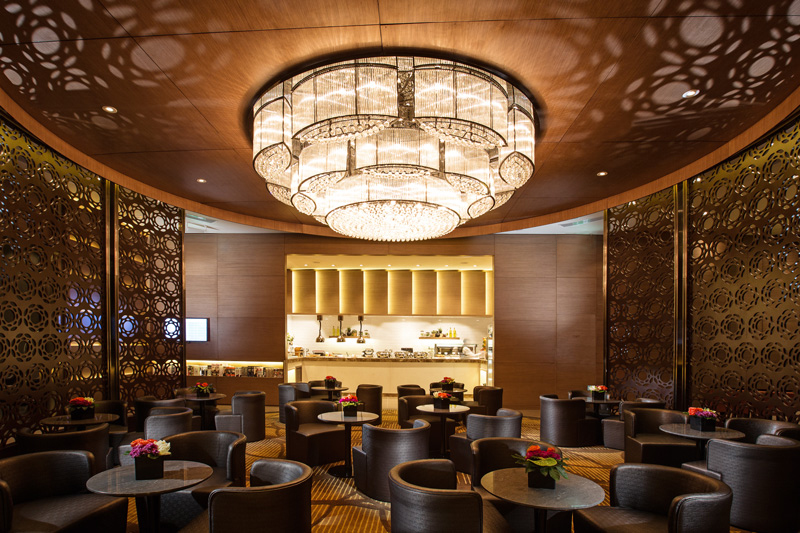 Interestingly my Gold Status with Virgin had gained me access to the Etihad Business Lounges in both Sydney and London and these were fantastic. In Sydney I was greeted with a hot towel and ordered a selection of canapés that came immaculately presented. In London they have a Six Senses Spa where I booked myself in for an Indian head massage. For 15 minutes I forgot I was about to board a flight.

Premium passengers and Gold/Platinum partners are granted speedy boarding. However, passengers at Abu Dhabi had got out of their seats the minute priority boarding was called and so I was blocked from getting to the premium boarding lane from where I’d been sitting at the gate. We still had an hour till take off though so I was in no hurry!

If I hadn’t already been at the gate there is a separate entrance to it for premium and business passengers right near where you board the plane. Keep an eye out as I only spotted it after I was on the moving walkway that went right past!

I was greeted warmly when I got on board and was directed to my seat, which was just past the entrance. Seat 12G on flight VA 30 (a Boeing 777) is the first row of premium economy by the bulkhead. I initially took my assigned seat, which was on the end of the middle aisle, but spying a spare window seat asked if I could move as there was a lot a foot traffic coming in and out of the curtain in front of me. (The galley with snacks and toilets was just behind it.)

The amenity kit, a bottle of water and menu were waiting on the seats when we boarded. An offer of hot towel, champagne or juice was made soon after we sat down.

The roomy seats are 19.5 inches wide and have an 8 inch recline. They also have ample leg room (6 inches more legroom than in economy), although a foot rest would have been nice. I counted 5 rows in premium economy, which were arranged 2-4-2 and separated from the rest of the plane so it felt quite exclusive. There is a solid divider between each seat, which means you have no contact with the passenger in the next seat. (I say this as my previous flight in economy included an awkward thigh overlap with the man in the seat next to me.) As I was in a bulkhead row the screen was stored in my armrest. It was a good size and the touch screen worked well. There was also a handset and USB port in the armrest and a reading light in the seat. The pillow we were given looked the same size and quality as in economy; the blanket was slightly bigger though. 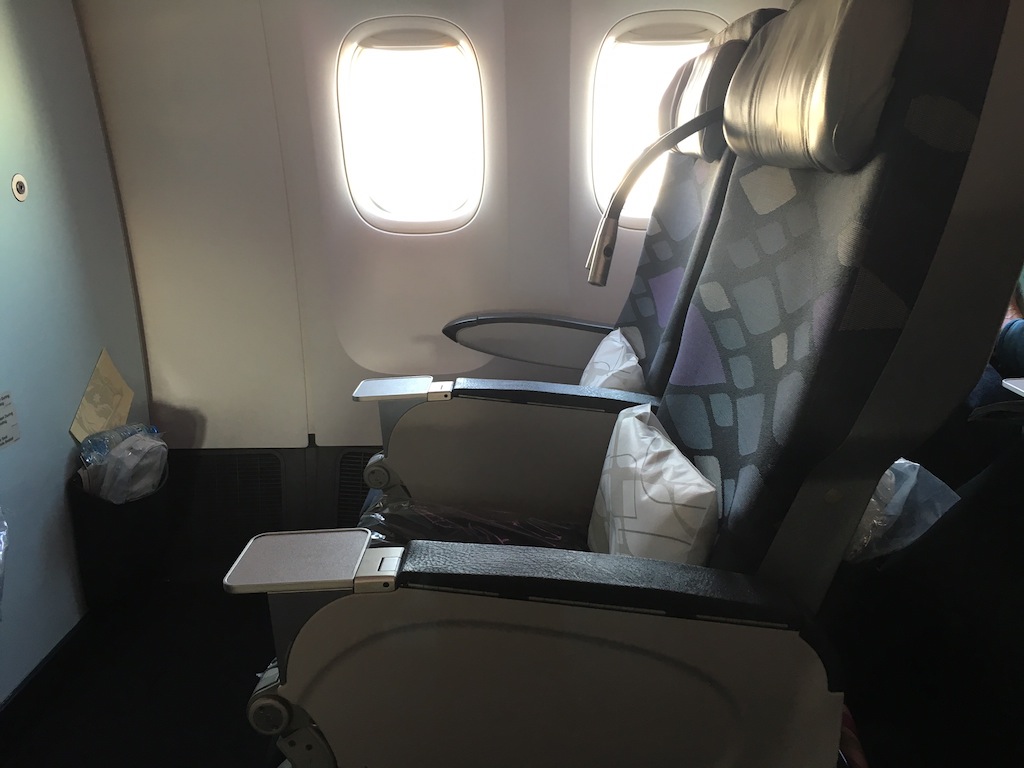 In the FROW of Premium Economy!

I really liked the amenity kit. The VA branded bag contained: dental kit, socks, eye mask (thick and silky), tissues (smart), pen (also smart), vanity pack with ear buds (not sure who will use this?) and some very nice hand cream and lip balm by Australian brand Grown Alchemist. 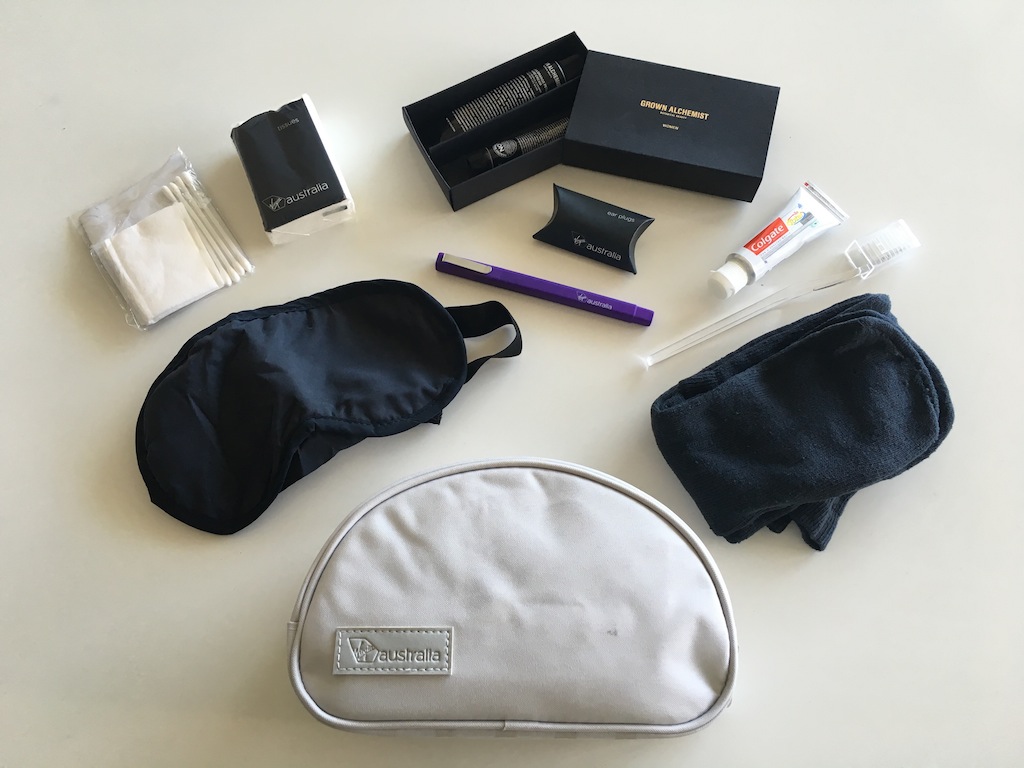 Love the Grown Alchemist products in the Amenity Kit

The VA menu is created by Aussie chef Luke Mangan and the Beef Massaman curry I ordered was delicious. (Side note: Luke has a restaurant 2 blocks from where I live and came over to say hi and offer me a glass of wine one time when he saw on Twitter that I was visiting with a friend – how nice is that?!) 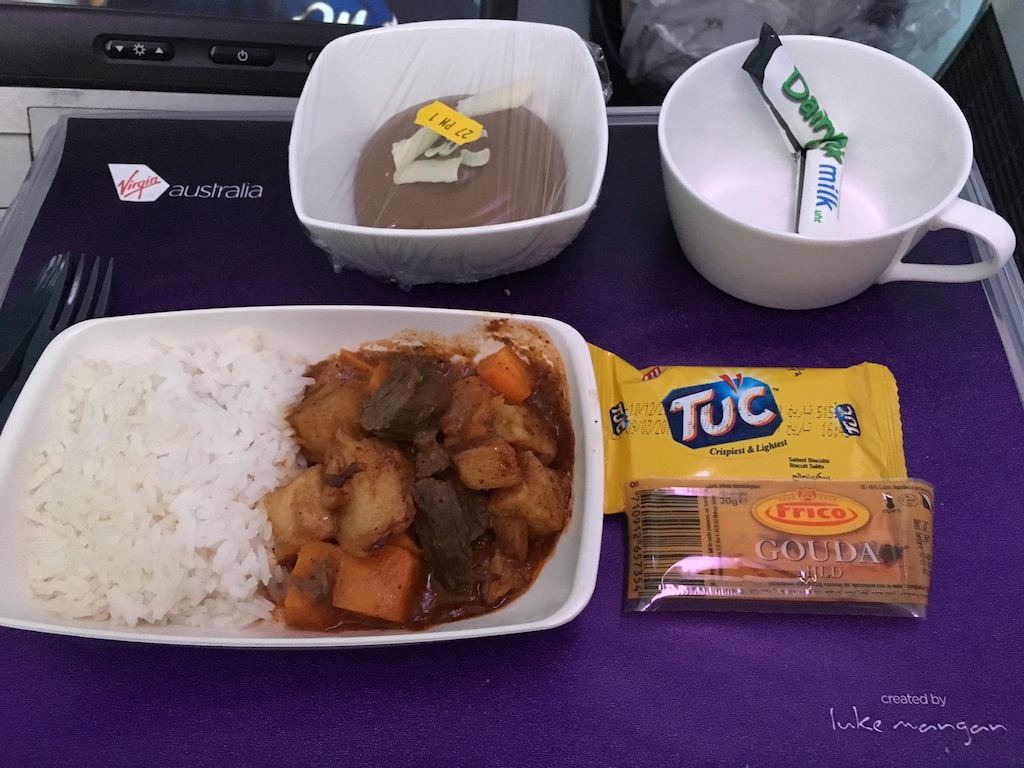 Beef Massaman went down a treat

I thought the presentation of the meal was not as nice as in Cathay Pacific’s premium economy, for example, and some real cutlery would have been nice. But everything I ate was delicious, including the vegetable calzone that was offered half way through the flight and the pancakes I ordered for breakfast. 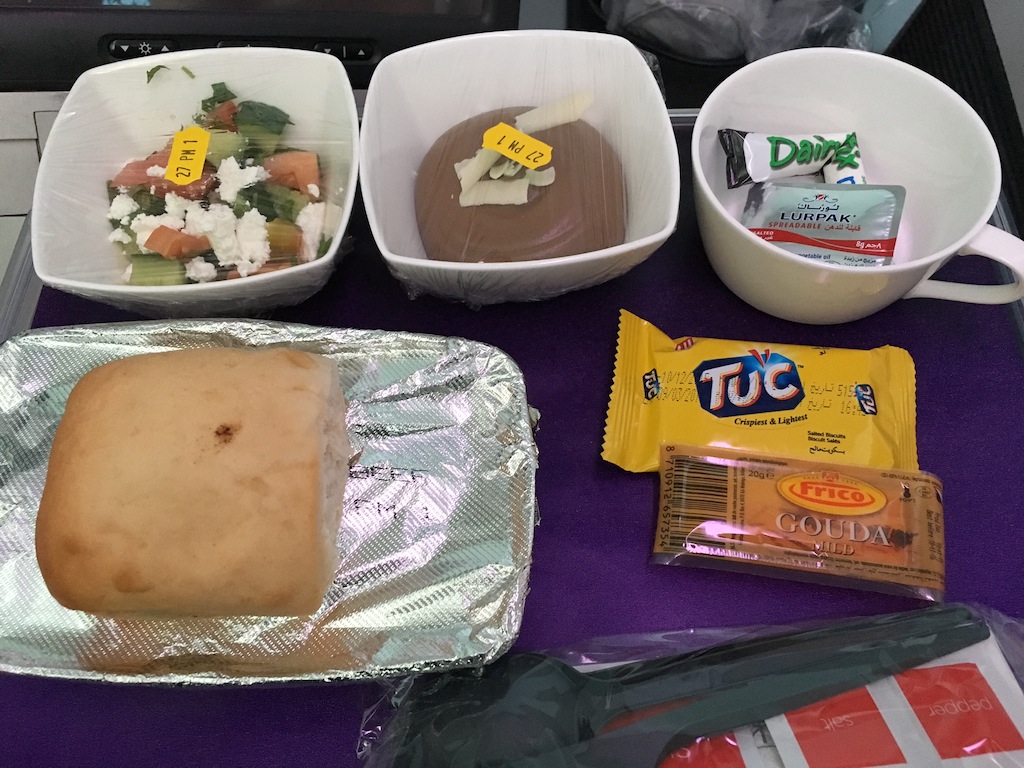 There were snacks in the galley throughout the flight – mainly juice, soft drinks, crisps and chocolate – but you hardly needed to visit as the staff regularly came through with drinks and offers of food. The baileys and brandy service before sleep was particularly appreciated. 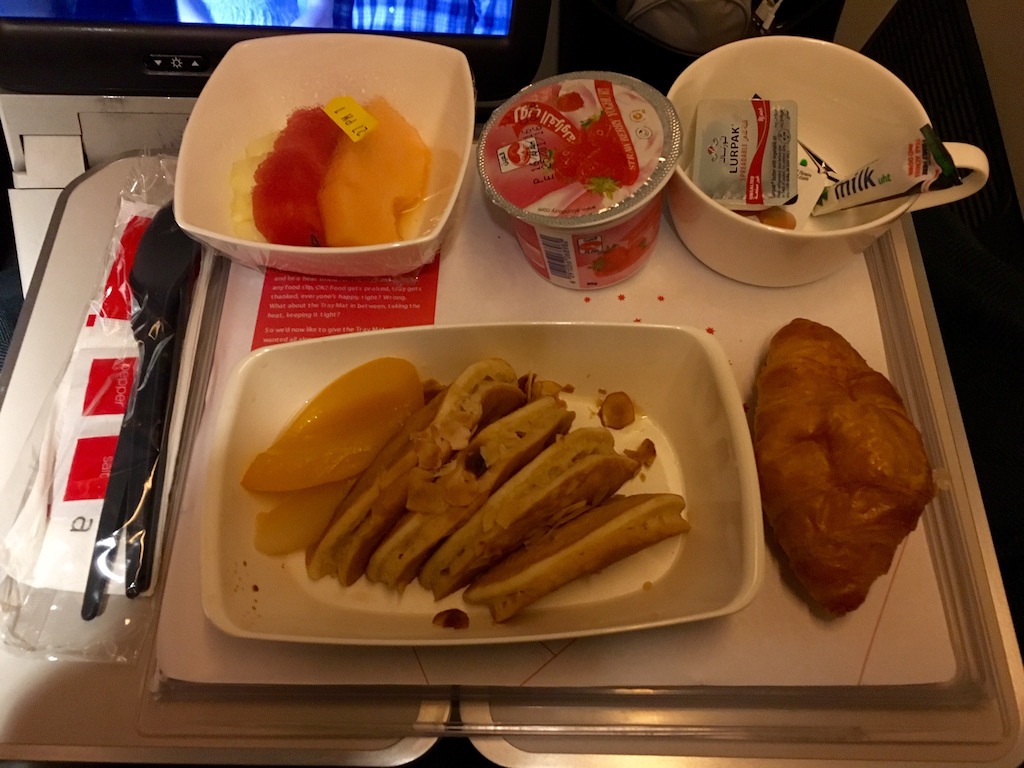 Yummy pancakes for breakfast – would have liked more syrup

As mentioned earlier the IFE system featured a decent sized screen and fast touchscreen interface. There was not as wide a selection of movies as there had been on my previous flight with Etihad but there was a good number of TV shows to binge watch. (I went with ‘Mom’ and ‘West Wing’.) The noise-cancelling headphones were seriously comfy and effective, so much so that I actually slept in them in order to block out the noise of the passenger with a cold who was coughing and sneezing behind me. 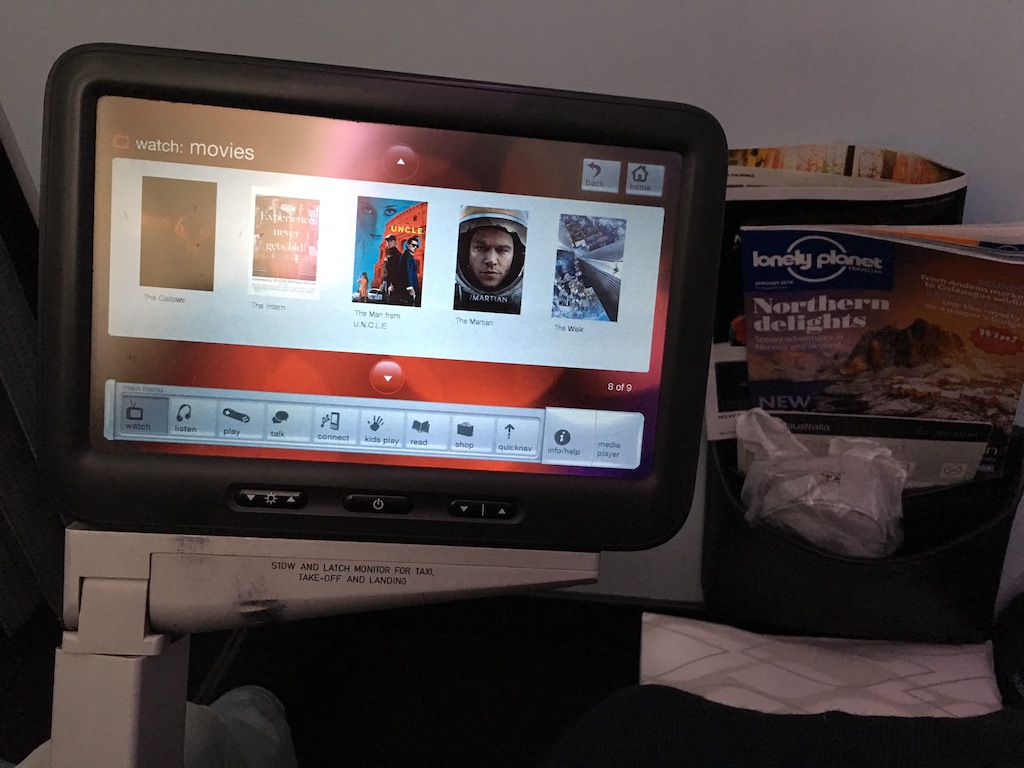 The service on the flight was seriously impressive from beginning to end. Staff were smiley and attentive throughout and did little things that made a big difference to the overall flight. Of note was the bottle of water waiting when we got on board and another that was handed out before we disembarked. The team took our meal orders before we left the ground and delivered each meal individually – being in the front row meant I was always first. They also came through regularly with drinks and information like how long there was until our next meal and how long until we land – 2 bits of information I always want to know when I wake up! I also loved how they had pre-filled our landing cards with the flight number and date – I guess they must get asked this a lot. 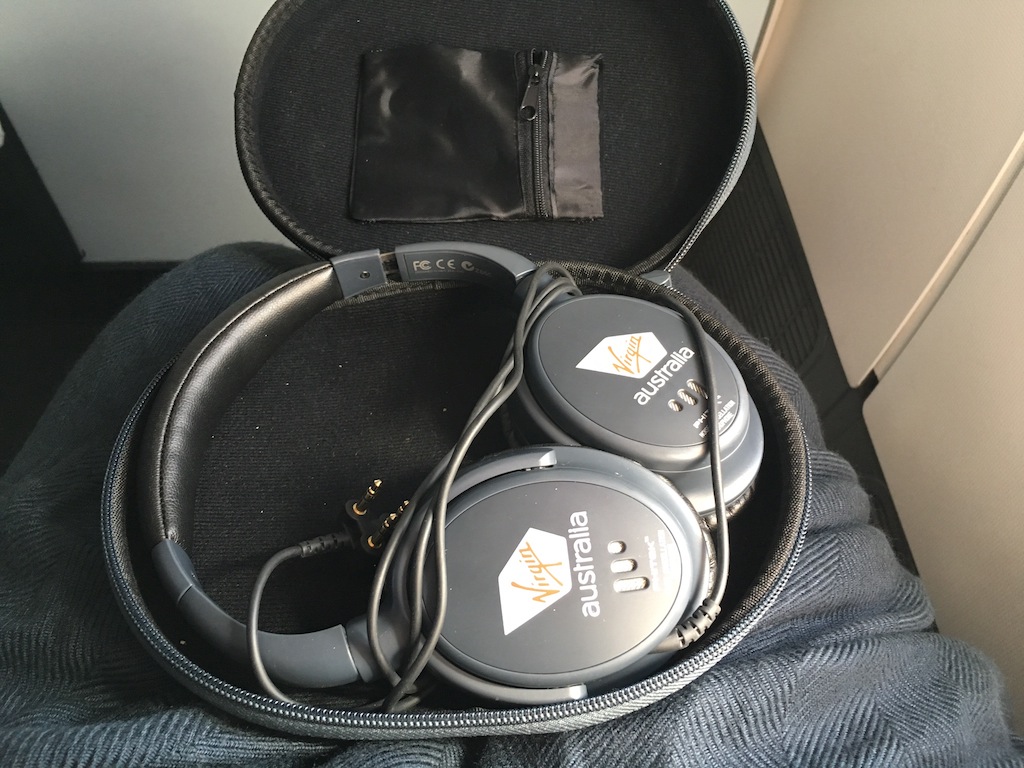 Super impressed with the noise-cancelling headset

When flying long haul the extra seat pitch and leg room in premium economy makes a massive different. After my outbound flight in economy I landed with a sore hip and neck from the strange position I had contorted myself into to sleep (and avoid rubbing thighs with the man seated next to me), whereas I had no aches and pains from sleeping in PE. There wasn’t a massive difference between the meals in PE from economy but the service was so incredibly slick and attentive that the overall flight experience was very pleasant. Although I was very lucky to receive this complimentary upgrade I would certainly consider booking a long haul flight in PE with Virgin Australia again. In fact, my other half already has for his upcoming journey from Sydney to LA.

This post is not sponsored or endorsed by Virgin in anyway. Just thought it might be helpful! Find out more about Virgin Australia Premium Economy here. 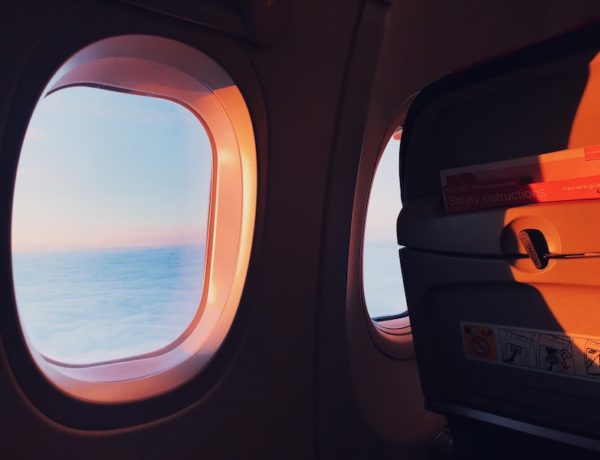 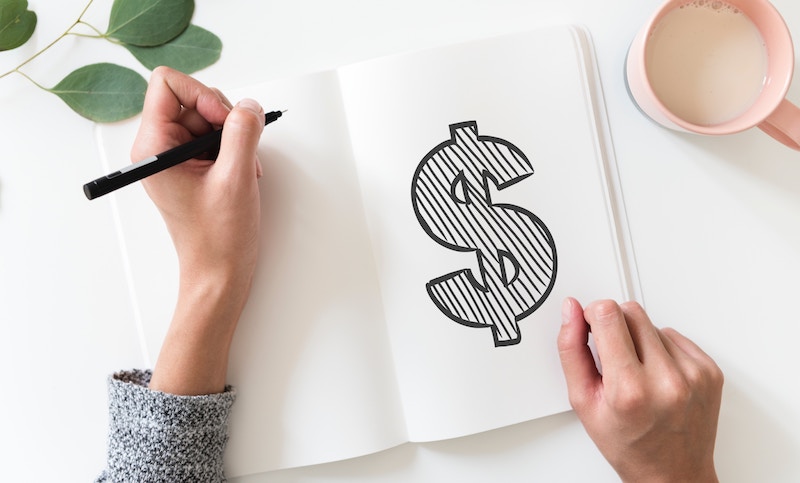 How We Really Afford To Travel So Much 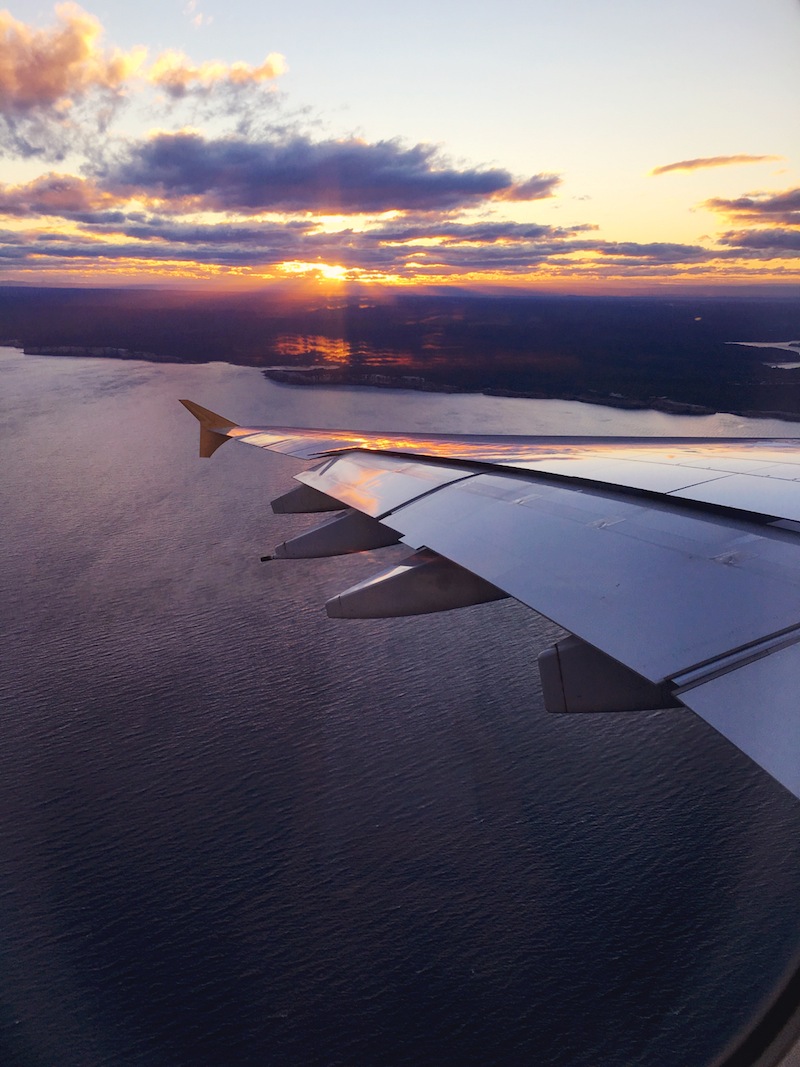 What It’s Like To Experience An Airplane Emergency Landing

4 Luxury Resorts the Insta-Elite Can’t Get Enough Of