In 2007, a couple of years before I started this blog, I hiked the Inca Trail. It was the first time I had ever done an activity like this – my first trek, my first time in South America, my first time camping in the wilderness. I was dreading it. 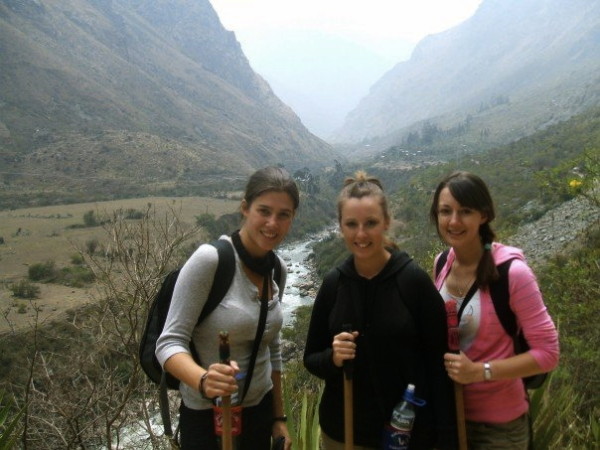 About to set off from Kilometre 82 back in September 2007

Acknowledging that there was no better way to discover the Inca ruins than by following in their original footsteps through the Andes, we had pre-booked the classic Inca Trail trek with G Adventures. My first time doing an organised tour of this type, I didn’t know what to expect. I followed the advice they sent out in advance and purchased some adequate insurance, and then I disregarded everything that was written about the type of clothes and equipment I would need. Error.

We arrived in Cuzco, 11,000 ft above sea level, 2 days before our tour was due to start in order to acclimatize to the altitude. Initially none of us felt ill and I began to wonder what all this talk of altitude sickness was about. Until I tried to climb some stairs. I approached them in my usual pace and by the time I got to the top I was woozy and dizzy and holding onto the banister so as not to fall back down. So this is what the Inca Trail is going to be like, I worried. 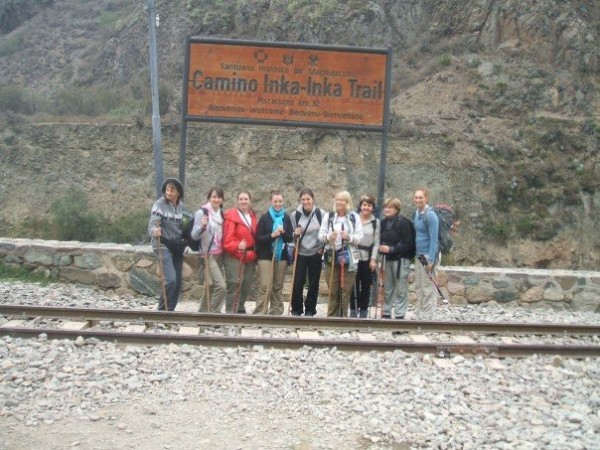 The whole group at Kilometre 82

The day before departing Cuzco we met up with the rest of the group who would be joining us on the trail. I later wrote home that, “We had an all female group of which we were the youngest, so there were no macho show offs racing to camp each day.” Our local guide took the group through the next few days, what we would need to bring with us, what to leave behind, and asked whether we would like to hire any special equipment. He had super thermal sleeping bags and ground liners for rent. We took him up on the offer of a comfier floor to sleep on but turned down the thermal sleeping bags in favour of our more familiar own ones. Error.

The classic Inca Trail is a 44km (27 mile) hike with 3 high passes, one of which reaches an elevation of 4200m (13,776 ft). For the 9 women in the group there were 16 porters, 2 guides and 2 chefs. We felt thoroughly spoiled as the tiny porters, many in bare feet, ran past with all our equipment so that dinner could be ready and waiting when we arrived at the fully built camp each night. 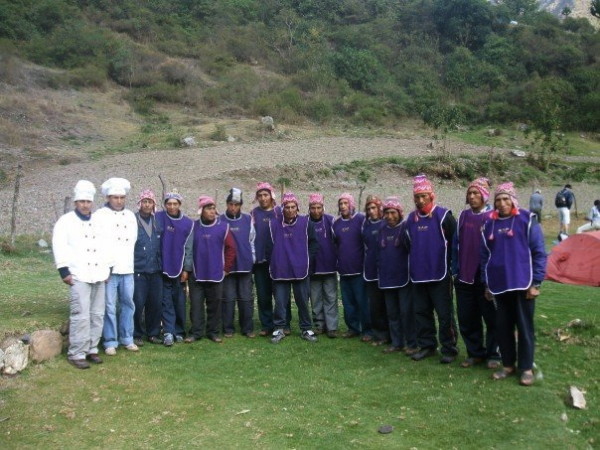 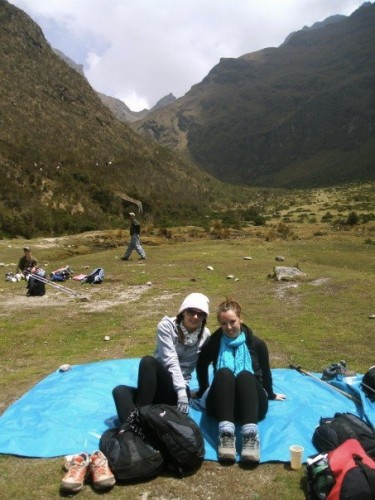 The first day had only one major climb so we could set our own pace and begin to take in the dramatic scenery; long, empty valleys, lonely donkeys, the misty sky. We’d had any easy start, whereas the next morning was an early start, for the second day of the trek was all uphill – 4200 metres uphill at 13000 ft above sea level – to the highest point of the trek known as Dead Woman’s Pass. At one point I had to stop every two steps to regain breath. On the steepest parts I worked out it was better to weave from side to side then tackle the steps face on. The shortness of breath was a struggle but at least none of us were suffering from severe altitude sickness. I remember a lady in another group who was, she had to assisted all the way back down the way we had come. 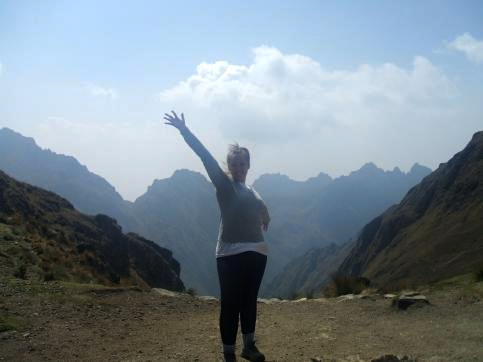 When night time came and the temperature dropped to minus 15 degrees I discovered just how under prepared I was for this trip – for some reason I thought just putting on two jumpers would suffice. Unsurprisingly there was not much to do of an evening on the side of a cold dark mountain, so we just crawled into bed at 7pm each night, tried to stay warm and prayed we wouldn’t need to go to the loo in the middle of the night.

A brief mention of the toilet situation on the Inca Trail: I was surprised to discover they did have loos dotted along the hike, but sometimes I wished I hadn’t. The long drops were often in appalling, foul-smelling, dirty-walled conditions. And if you needed to go in the middle of the night you’ll need a head torch to avoid falling in one and movement at the speed of light to avoid freezing. Just remember to pack lots of your own toilet roll, wet wipes and hand sanitizer. 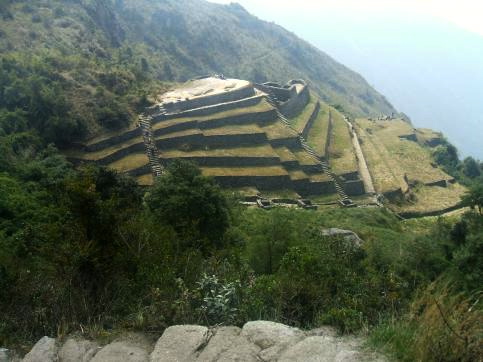 Inca ruins discovered along the way

Most mornings you are woken at 5am by a tap on the tent and a warm bowl of water outside to wash in. Our crew on the trip were simply superb. Whilst I was wearing everything I owned and dreadfully fearfully my next trip from the tent to the loo, the porters were hurrying around cooking up a warm breakfast and dishing out hot drinks of coca tea (mate de coca) – known to help with altitude sickness. Everyday they would arrive at camp hours before us and not only have all our tents set up but dinner about to be served as soon as we strolled up to the dining area. This even after we had left them behind packing up the tent and pans from the lunch they had prepared for us on the side of some pass. They are miracle men and I couldn’t have done it without them. 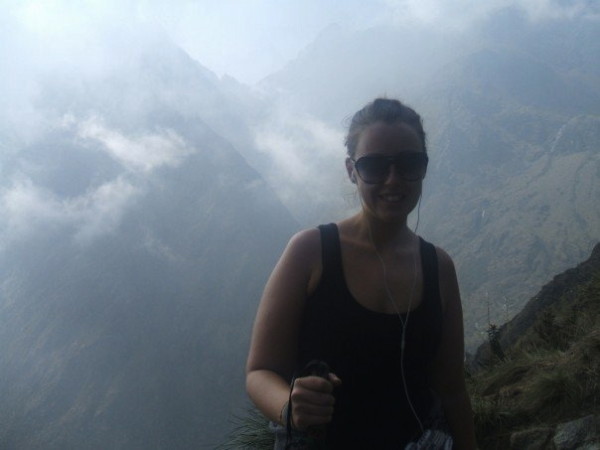 In the middle of a cloud forest

On the fourth and final day you are woken at 4am to begin the trek to the Sun Gate, where we were to get our first glimpse of the site we had been working our way towards for 3 days, Machu Picchu. This was the hardest day for me as I had got it into my head that the trekking was over but it transpired there was a last minute four hour climb I had no knowledge of. However, after all those days following in the footsteps of the Inca’s, coming across old ruins, marching on their actual stones and wandering through cloud forests, finally seeing Machu Picchu from the Sun Gate is an indescribably wonderful feeling. The Inca ruins, dating from the 15th century, are spectacular and you kind of hope they will be after trekking four days to see them. 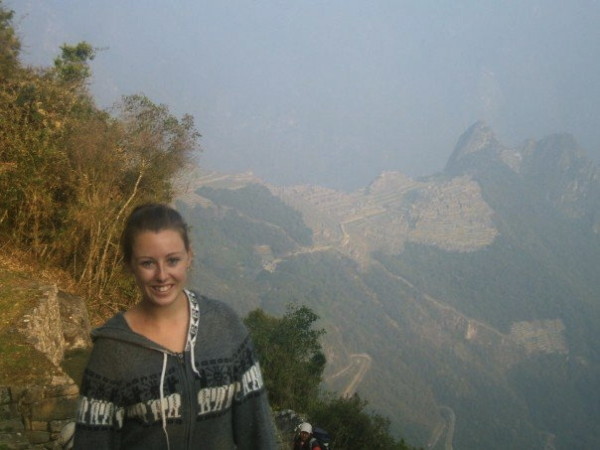 First glimpse of Machu Picchu from the Sun Gate 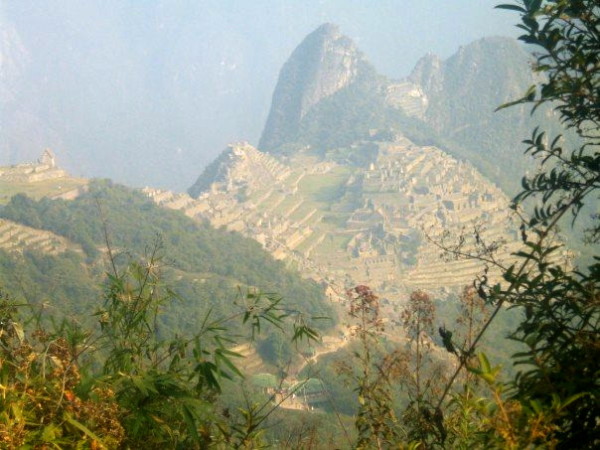 My only (blurry shot) of Machu Picchu from 2007

We were taken on a tour of arguably the most recognizable Inca site in the world but I didn’t take much in – I was far too knackered and dreaming about a clean toilet and a much needed shower! Why Machu Pichhu has survived all these years is disputed, perhaps its remoteness helped protect it? Perhaps the fact they found mainly females bones here meant it was a holy site? It is not mentioned in any of the chronicles of the Spanish conquistadors and archaeologists today can do no more than speculate on its function. Today though the history and beauty of the site is widely recognized – Machu Picchu was declared a Peruvian Historical Sanctuary in 1981, a UNESCO World Heritage Site in 1983 and in 2007 Machu Picchu was voted one of the New Seven Wonders of the World in a worldwide Internet poll.

All I know was it looked like a pretty special place to me and I’m glad I hadn’t got there the easy way (there is a train to nearby town Aguas Caliente for those that don’t fancy hiking). But I felt like the site deserved more than that, even if the trek had been a bit tougher than I anticipated. 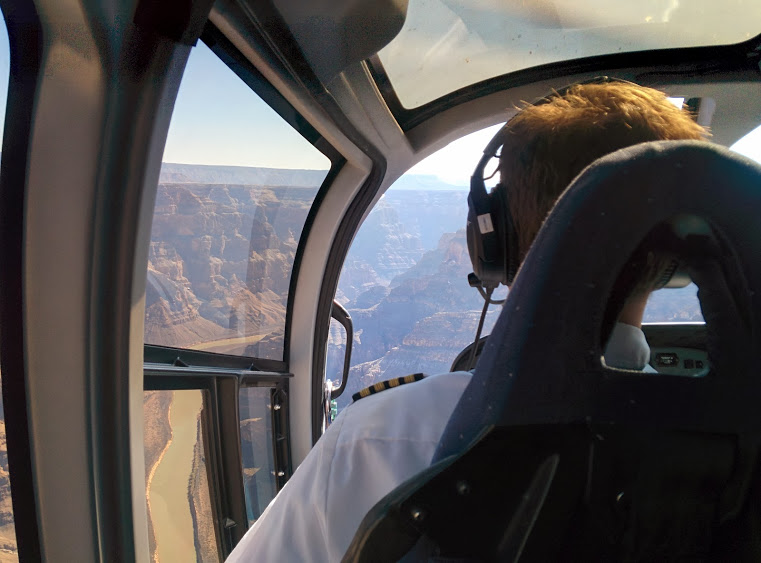