After a disappointing flight in economy with British Airways from London to Vegas I opted to upgrade to their premium economy product known as World Traveller Plus on the return leg.

For those not interested in detailed reviews let me tell you in one sentence if it is worth paying to upgrade to World Traveller Plus – it depends on the aircraft.

At the time of purchasing my flights to Vegas the BA site flashed up an image of a chic, ergonomic-looking new premium economy seat that it said could be all mine for just £150 extra. I caved in and coughed up so that I could see what it was like. I’d had a great experience flying premium economy with Cathay Pacific and hoped BA would be of a similar standard. It was not. 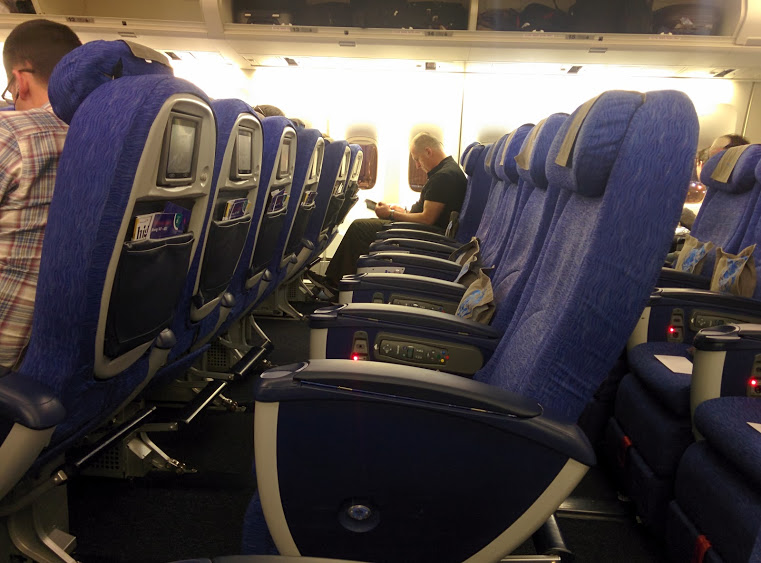 The World Traveller Plus Cabin

Unfortunately the cabin I was met with on my flight was nothing like the one in the picture that had sold it to me. Our aircraft didn’t have the new cabin installed – perhaps it said this somewhere in the small print of the website but it evaded me if so.

That being said the World Traveller Plus section certainly felt more private, with only 4 rows in the left hand aisle I was sitting in. The seat was wider, pillow plumper and the footrest could be adjusted to just the right place for my little legs. 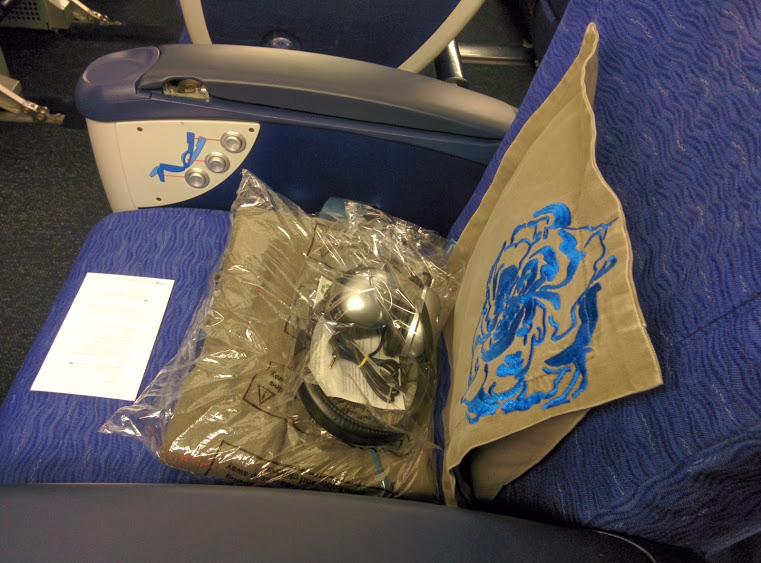 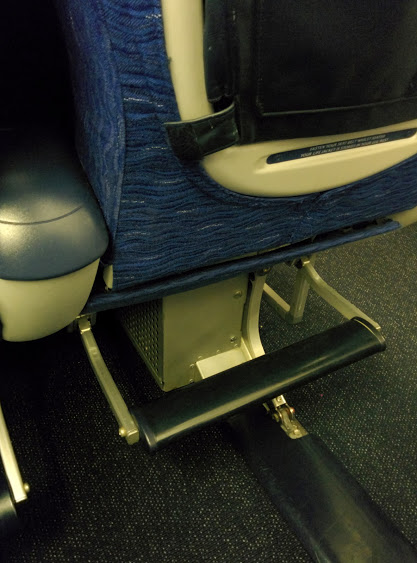 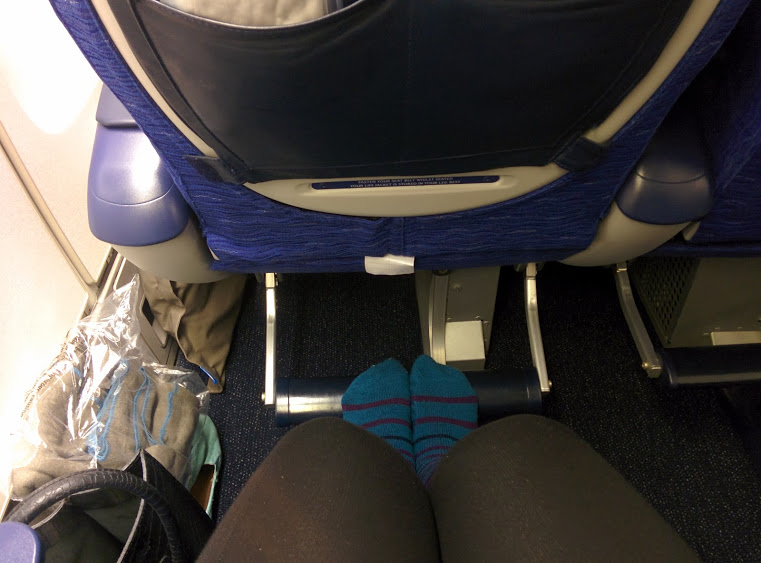 Cosy cushion and decent legroom in World Traveller Plus

The amenity kit was nowhere near as impressive as Cathay’s. The plastic wallet contained some very drab-looking socks and eye mask and the noise-cancelling headphones were old and scratched.

I never got to test out if they were any good though because sadly, just in premium economy, the inflight entertainment did not work – for the full 10 hours of the flight.

There was a system error in our part of the plane and, frustratingly me for, this even affected the reading lights. I tried to write some notes by the light of my phone (as the cabin lights were dimmed) but my phone battery ran out and there was nowhere in the cabin to recharge it. (Etihad economy seats, in contrast, come with power sockets and Wi-Fi!) The screen was the same small square with a visible grid pattern that I’d had in economy on the way out (that one had been working though). 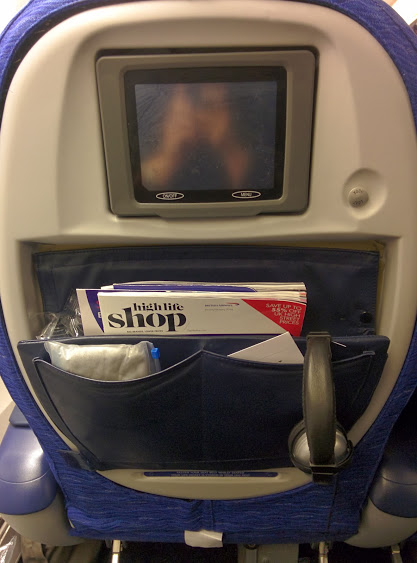 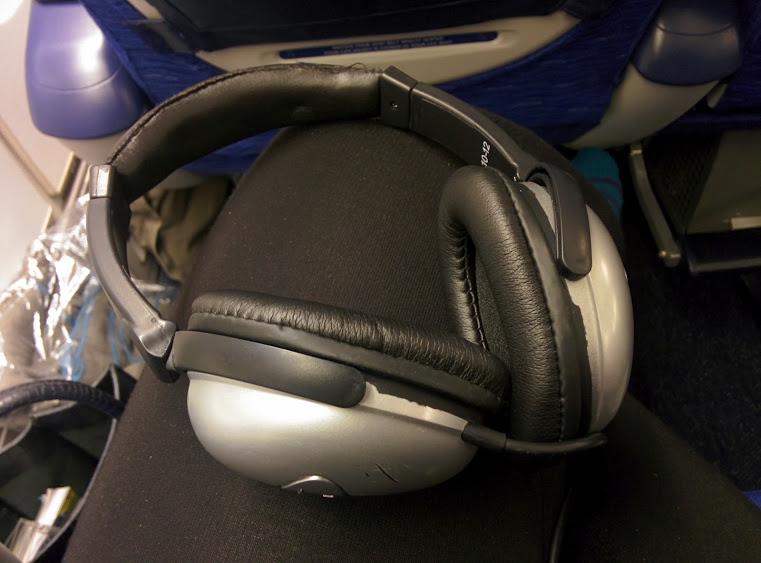 Unlike in economy, you receive a menu in premium economy, which tells you what you are about to eat and so it removes a lot of the guesswork. You also receive some pretzels with the first round of drinks, which is something I have noticed BA have scrapped in economy on routes I have recently travelled, including to the US and Caribbean.

I also learned that the pork dish I ordered was the same as the one on offer in Club World (where my lucky partner was travelling – he had a choice of 4 meals and we had a choice of 2) except his was better presented – served on a plate and sauce poured on top instead of left in a foil dish. The salad was bland and dessert a bit squashed but the most annoying thing was having to eat it the dark. 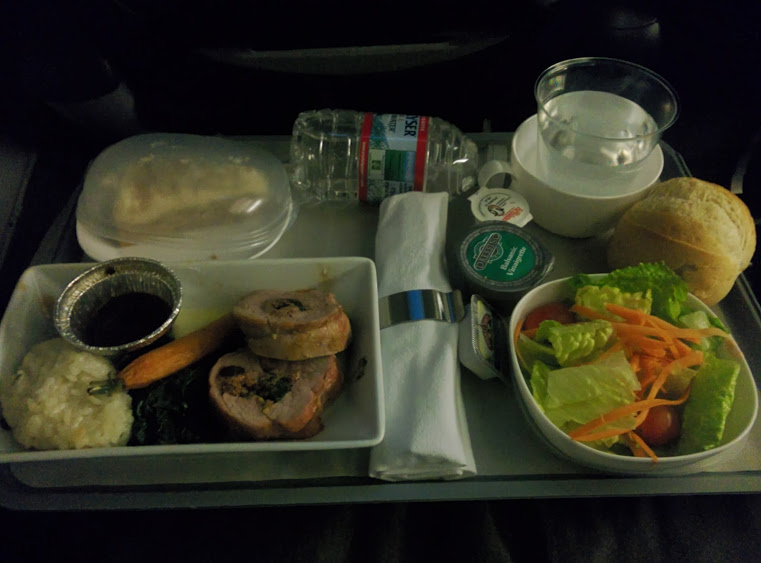 Breakfast was also disappointing. Although it was a 10-hour flight we were simply served a cold croissant in the morning with some ‘craisons’ (dried cranberries anyone?!).

In Club they were offered something warm as well as fresh fruit smoothies. Breakfast was marginally better than the coronation chicken sandwich we had been served as a second meal in economy on the way out though (the hostess had miserably handed them out with the words ‘It’s just a sandwich – you want it?’)

As a point of comparison my economy flight with Sri Lanka Airways a few days prior had come with two hot meals and a selection of up to 4 meals to choose from each time. We also received a menu so we knew what would be coming. (I still have no idea what was in the starter I ate on my flight out to Vegas with BA.) 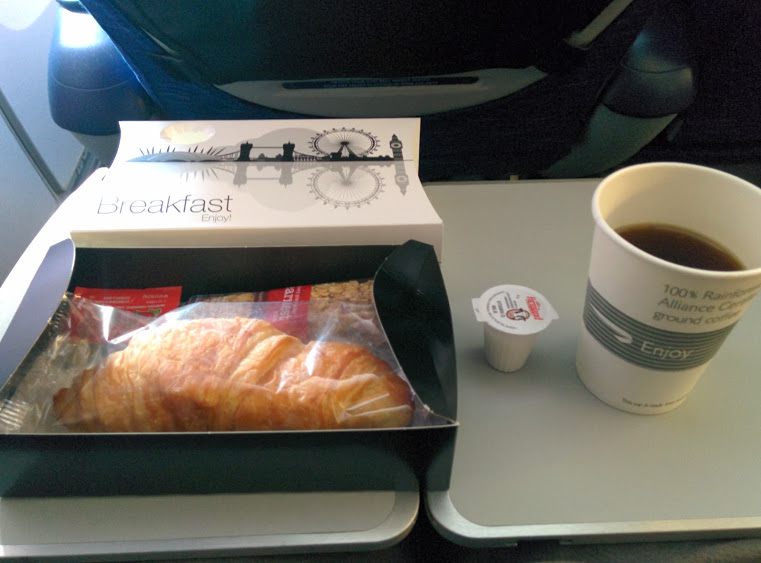 Cold croissant in a box for breakfast

Having nothing better to do, and the extra legroom to do it in, I slept well on my flight home from Vegas. Because I nabbed the special offer upgrade price of £150 I am happy with my decision – when travelling on my own I would happily pay that price not to be so squished next to a stranger. In comparison to Cathay Pacific, however, BA have a lot of improvement to do with their amenities and food in order to match their premium economy offering. I’d also be keen to try out those sleek-looking new seats I saw on the website when booking. Better luck next time maybe..

Have you flown in a premium economy cabin with BA or otherwise? What did you think?

*With regards to the faulty in-flight entertainment passengers were invited to fill out customer complaint forms on the plane and within 10 days I received an email apology and 10,000 Avios from BA to compensate. They didn’t offer to move me during the flight. 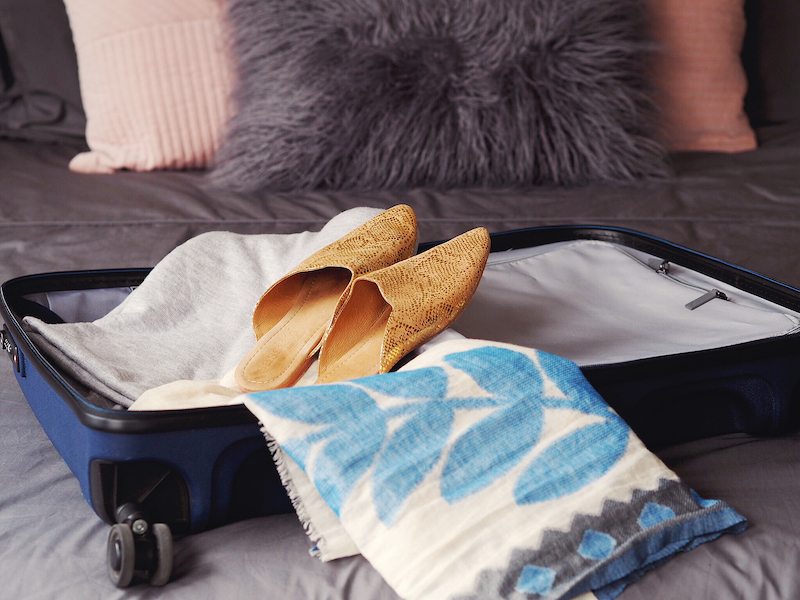 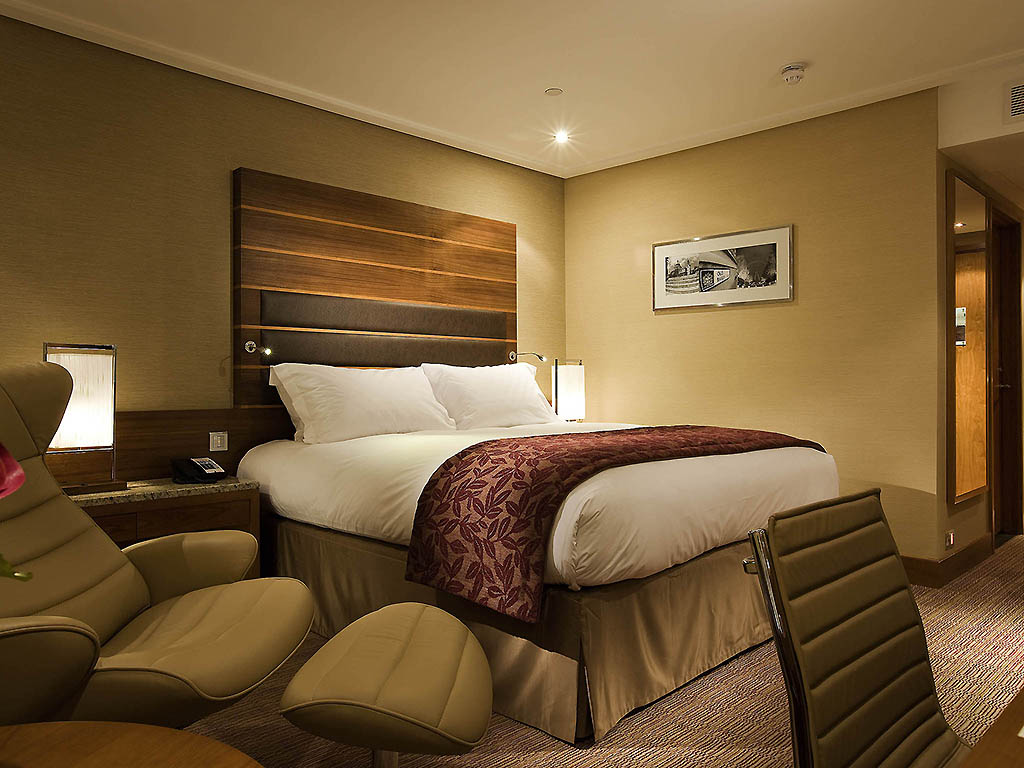 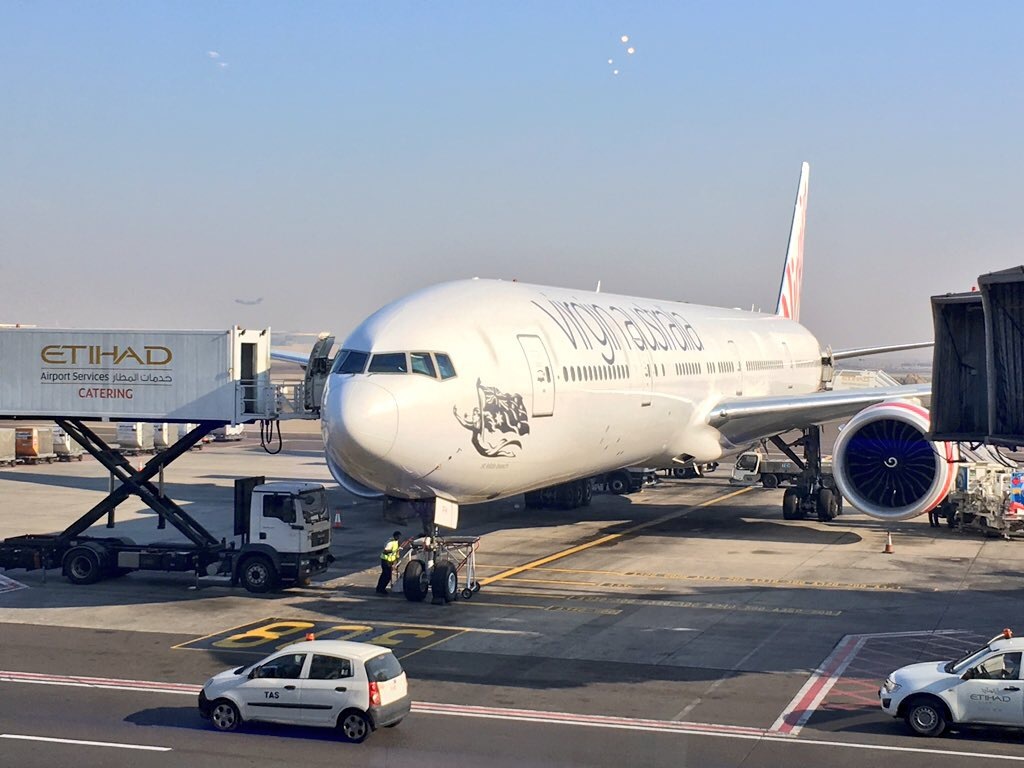 How To Book A Good Guesthouse In Sri Lanka