Two minutes after stepping off the train my nose hairs were tickled by a waft of freshly baked baguette. I breathed in the smell of France and blew out a contented sigh, experiencing only the tiniest stab of guilt about all the naughty foods I knew I’d be tempted to try in the name of research over the coming weekend. Little did I know… 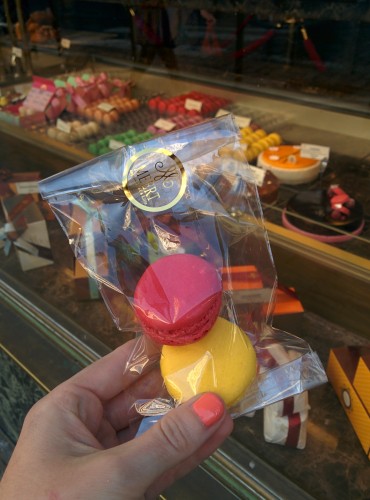 It turns out Lille is an unsung hero for foodies, not least for those of us with a mouth full of sweet teeth. It seemed almost every other window in the old town was a tantalising display of pastries, cakes and chocolates that had me melting into a puddle on the pavement outside. Lille is a very walkable city, so I stalked all over it in search of the best sweet treats.

These are the highlights:

Meert is one of France’s oldest chocolate shops and has been operating since 1849 in a building that looks like an upmarket pharmacy for chocoholics. The old town premises are broken up into 3 parts, the cake store to the left, chocolate to the right and a café out the back. Meert are famous for their filled waffles but these weren’t to my taste – the vanilla stuffing was scrummy but the waffle casing seemed dry and I was surprised to find they serve them cold. The macarons, however, were very much to my taste, so much so I had several. 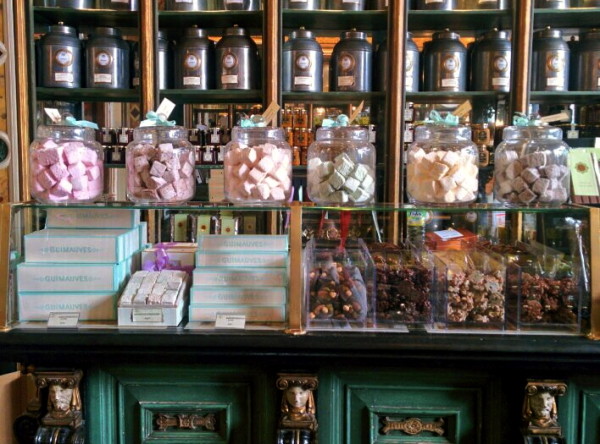 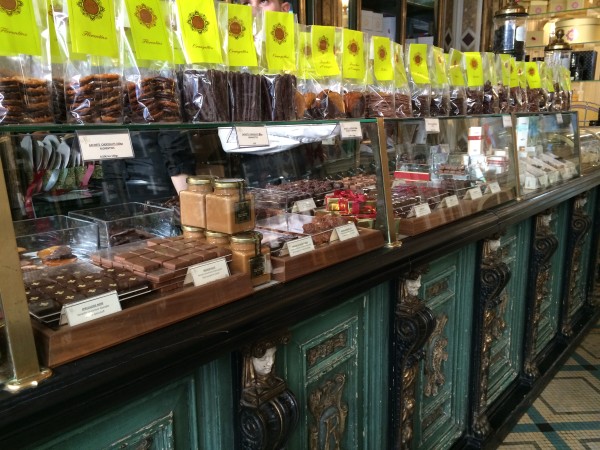 Meert can be found at 27 Rue Esquermoise. They also have an outlet in Primtemps in Lille and La Piscine in Roubaix.

Frédéric Vaucamps from the north of France is known as the merveilleux creator. A merveilleux is a meringue generously covered with whipped cream and sprinkled with various toppings including white and dark chocolate and Speculoos (the famous spiced shortcrust biscuit.) The Merveilleux come in several sizes, including a rather large one for sharing, and are known to cause queues weaving out the door at their various stores. 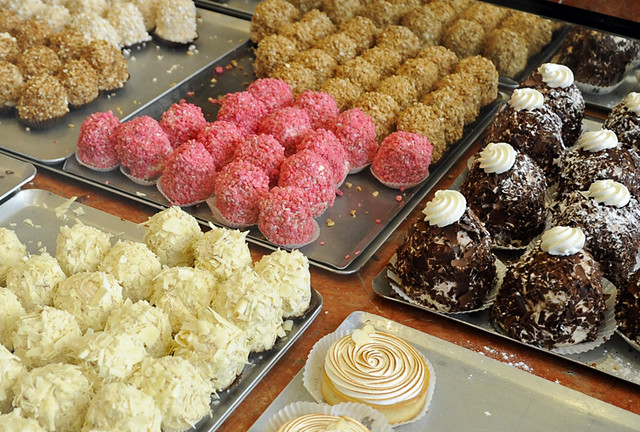 Although there was a queue out the door of Aux Merveilleux de Fred in Wazemmes I was much more interested in Patrick Herman a couple of doors down. The back wall of Patrick Herman is a rainbow of macarons with flavours including ‘sunshine’ and ‘surprises’. They also sell champagne, lemon, mango, rose and nutella flavoured macarons and I managed to try quite a few. They were all deliciously crisp on the outside and gooey in the middle with the right burst of flavouring to make them pop in your mouth. The rest of the cakes in the shop are also incredibly beautiful, like works of edible pop art, that would be perfect for celebrating a special occasion. 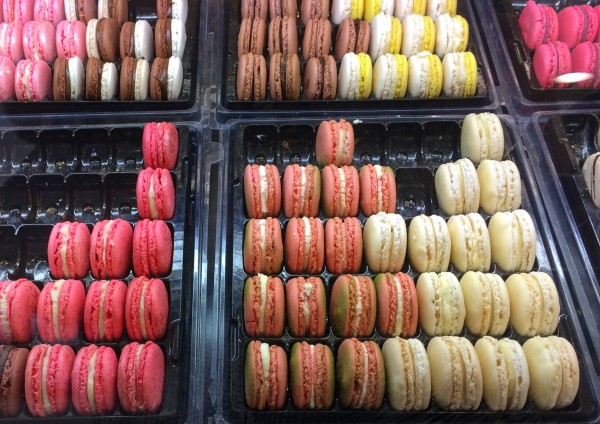 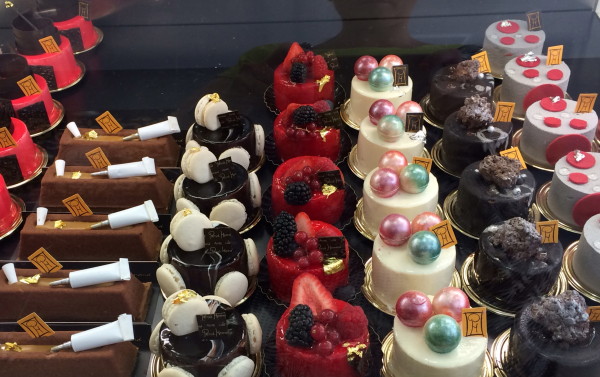 Patrick Herman can be found on Rue Basse and 324 rue Léon Gambetta in Lille and 2 rue du petit chaudron in Arras.

My test for a good coffee shop is whether I can hear Aussie accents. Sitting just one seat down from me on a bench in Coffee Makers were two ladies from Sydney who live in Lille and come to the café often for what they call the best coffee in Lille (this was also the term they googled to originally find the place.) The owners of Coffee Makers, a Dutch man and Polish gent who looks like Matt Smith, met on a coffee forum and wanted to bring a taste of east London to Lille. This I can honestly say they have. The coffee was as superb as we hoped and the cakes were even better. A pleasant surprise though were the sandwiches, my marinated chicken baguette came with a mint and pea sauce that really worked. The slice of cake I opted for was a dark chocolate gateaux with a punchy red wine glaze which was beyond yum. (You can find the recipe here – thanks to Eve from Living France who sourced this from the owners after falling in love with it too.) 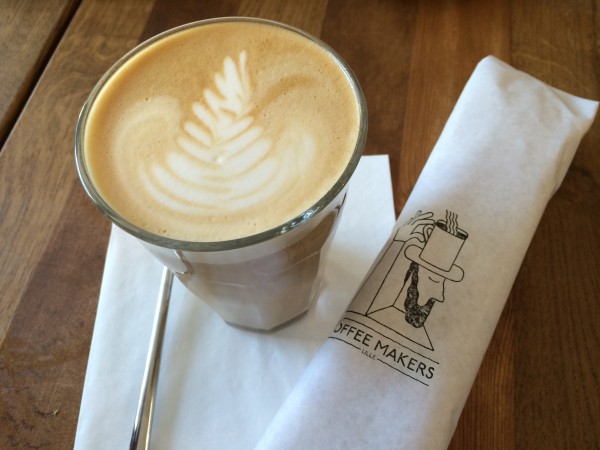 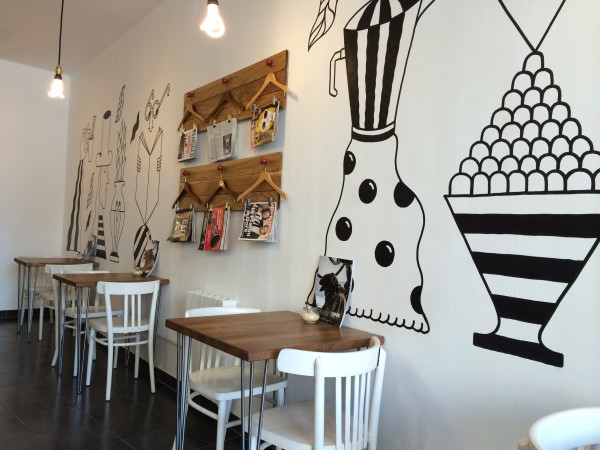 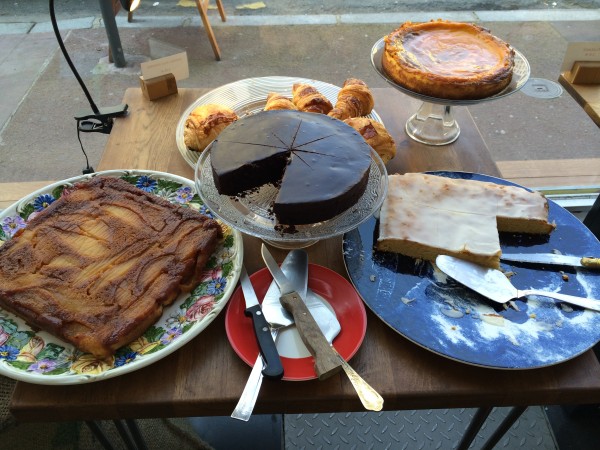 Coffee Makers can be found at 151 Rue de Paris.

I couldn’t eat all the sweet treats in Lille in just 3 days (although I gave it my best shot) but I got some great recommendations from my fellow press trippers who did some taste testing of their own. Eve from Living France recommends Koka Ice Cream, which she discovered after joining the excitable queue, and Kat from Travel With Kat had high praise for the praline at Au Chat Bleu. They’ve given me at least 2 reasons to hop on the next train to Lille.

The Eurostar from London takes just 1 hour 20 to reach Lille and return fares start from £69. We travelled in the very roomy Standard Premier coach which comes with a light meal. There is no limit to the amount of cake you may bring back in any carriage though!

I travelled to Lille in association with Eurostar and Lille Tourism. All opinions and calories consumed remain my own. More posts on the fashion and food of Lille and Roubaix will be coming in the next few days. 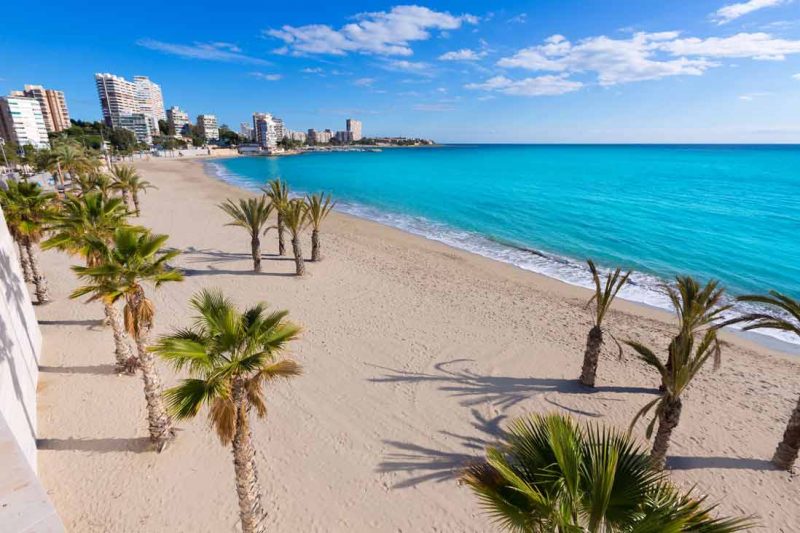