Top 5 Things To Do In Taipei, Taiwan

I have already raved about Taipei; how it combines traditional culture and modern convenience without the usual ensuing chaos. I particularly loved its café culture – like Sunny Hills’ mix of European design and traditional Taiwanese cakes – and my first experience of KTV private karaoke.

If you’re about to embark on your first visit to Taipei these are my top 5 must-sees in the city.

Best things to do in Taipei

There is more than one Longshan Temple in Taiwan, the eldest is in the old city of Lukang, but the one in the Wanhua District of Taipei is the largest and has a special air to it.

The scent of incense drew me in, along with the calming sound of the waterfall said to bring good fortune into the temple.

The offering table was overflowing with colourful bouquets that coordinated with the reds and golds of the architecture. I asked the Gods for permission for a favour by rolling the moon shaped stones – 3 times I was denied. Perhaps I was not sincere enough. 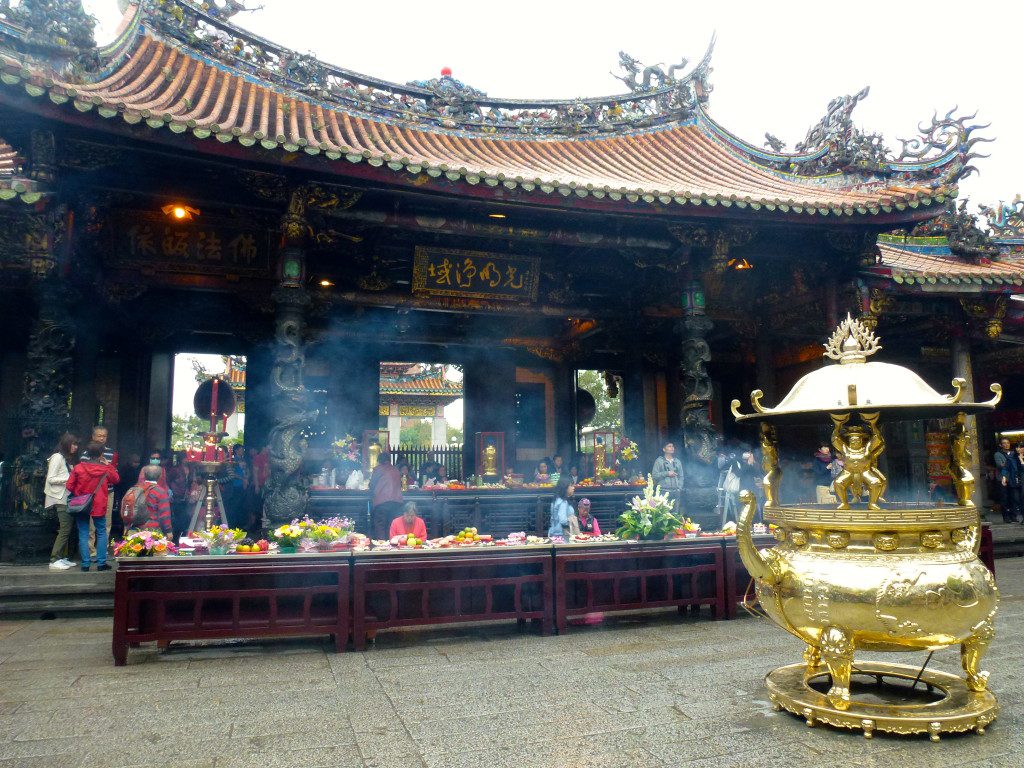 Towards the back of the temple are the golden Gods that people pray to for different purposes. One was particularly popular with younger worshippers – the God of scholars. He is prayed to by students and their parents for exam success. Some had posted their entrance exam certificates into the shrine for extra good karma. A few had seen the results they desired, big thank you bouquets from happy parents had been left nearby.

Taipei 101 dominates the Taipei skyline – at 508 metres tall there is no other tower in the city that comes close to it. (Upon its completion in 2003 it was the tallest building in the world).

The building’s architecture is rather interesting; it looks like a series of small buildings stacked on top of one another. There are 8 sections in total making up the bamboo stalk-like structure, “eight” being a lucky number in Chinese culture.

There are other symbolic parts to the design too – the exterior corners are decorated with key shaped silver structures that are said to lock good fortune into the building. 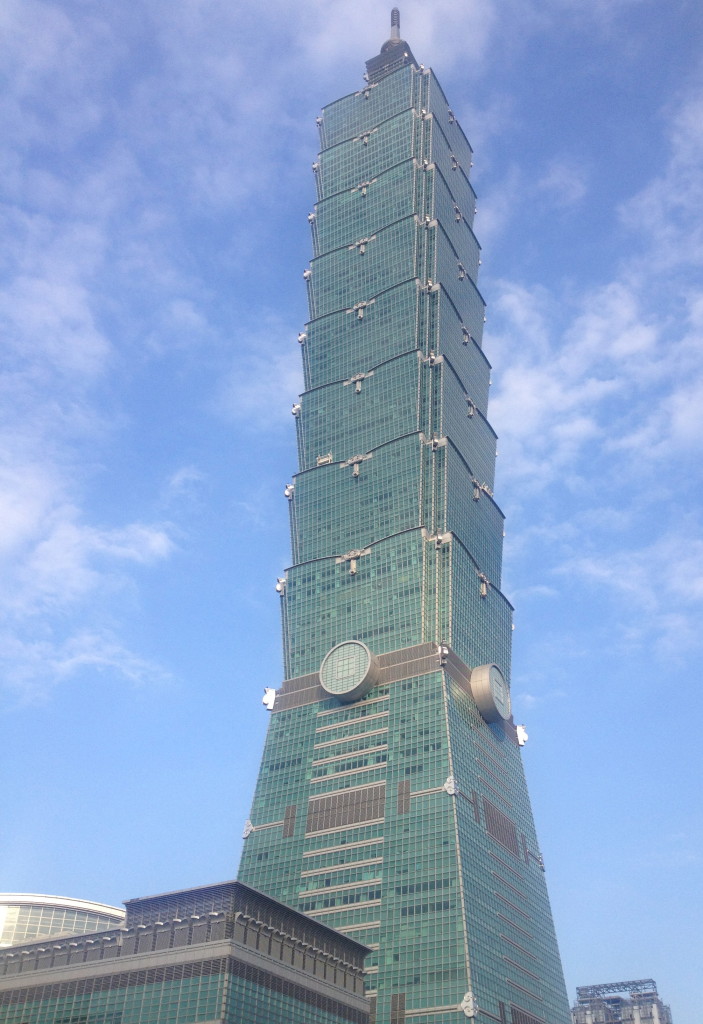 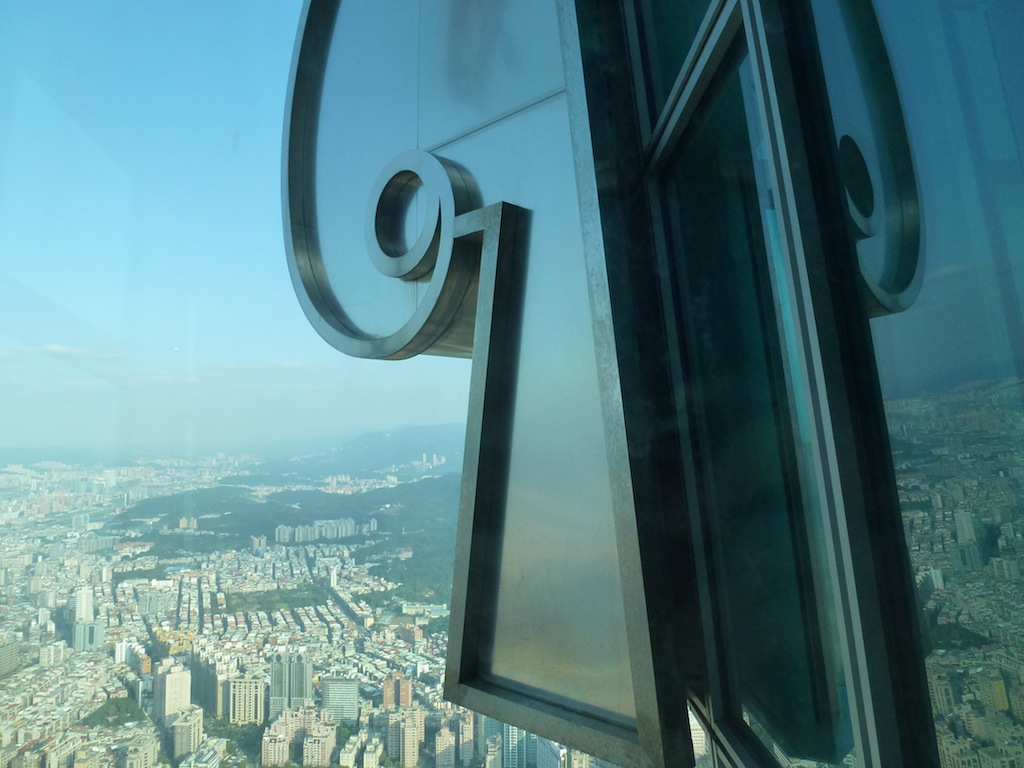 The Taipei 101 observation platform is on the 89th floor. The world’s fastest passenger lift takes you up there in under 39 seconds flat, it’s ear-poppingly fast. The view was somewhat murky on our visit – situated as you are higher than the clouds, you have to find the right spot to see beyond them. It’s a wonderful way of getting to grips with the layout of Taipei though. Situated in a basin the city is surrounded by forest-cloaked mountains on all sides and watching the planes come in and out of the airport is great for aviation geeks.

You can pay a little extra to access an outside deck on the 91st floor, which is the highest outdoor viewing platform in the world. Unfortunately, in the interests of safety, the edges are heavily barred; only the very brave will stick their camera through to photograph the view.

On the way out you be routed past the unusual yet intriguing sight of the 660-tonne tuned mass damper (the world’s largest), which protects the building from damage in the event of high winds or earthquakes. In true Taiwanese style the mass damper has been turned into a cartoon character that people queue to have their photo with!

Housing a high-end mall with a tempting array of designer stores as well as a fabulous food court, the ground floors of Taipei 101 are worth exploring too.  You can grab lunch at the delicious Din Tai Fung. A well-known chain throughout Asia, Din Tai Fung is in a Michelin-starred Taiwanese restaurant and their Xiao Long Bao are to die for. The little card in English explaining how to enjoy the steamed buns are helpful and you can get real insight into the precision that goes into preparing them via the glass walls of the kitchen. 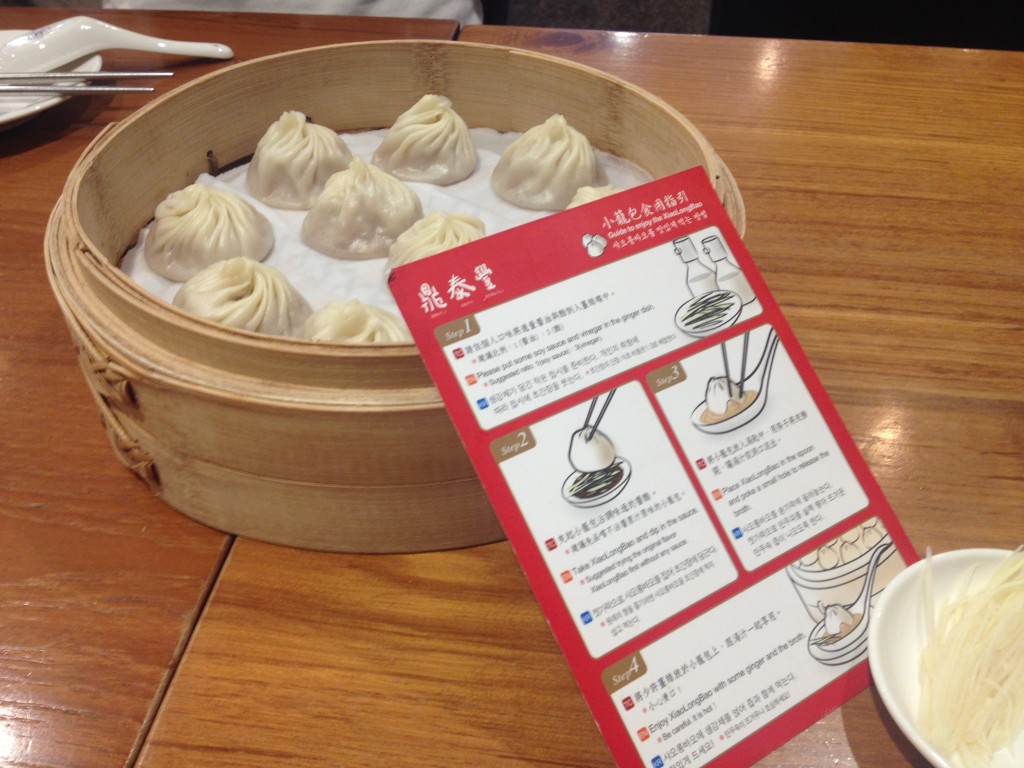 For the best view of Taipei, however, you need to get out of the famous tower – no picture of the skyline seems complete unless it is starring in it. Requiring a bit of physical exertion the hike up Elephant Peak, a short drive from the tower, will reward you with a glorious vista of the city, and a chance to see just how tall that famous tower is. A short drive outside of Taipei will show you what life was like in the city before skyscrapers.

The village of Juilfen clings to the side of the mountain, sporting tea houses and restaurants with gorgeous views of the coast below.

Juilfen Old Street is a winding, historic corridor filled with food stalls and souvenir shops that Japanese tourists, in particular, love to wander. We found ourselves a quiet spot at a teahouse and supped fresh tea brewed on hot coals from our table overlooking the ocean. Tea consumption is a big part of Taiwanese culture; tea leaves even turn up in a lot of the cakes. 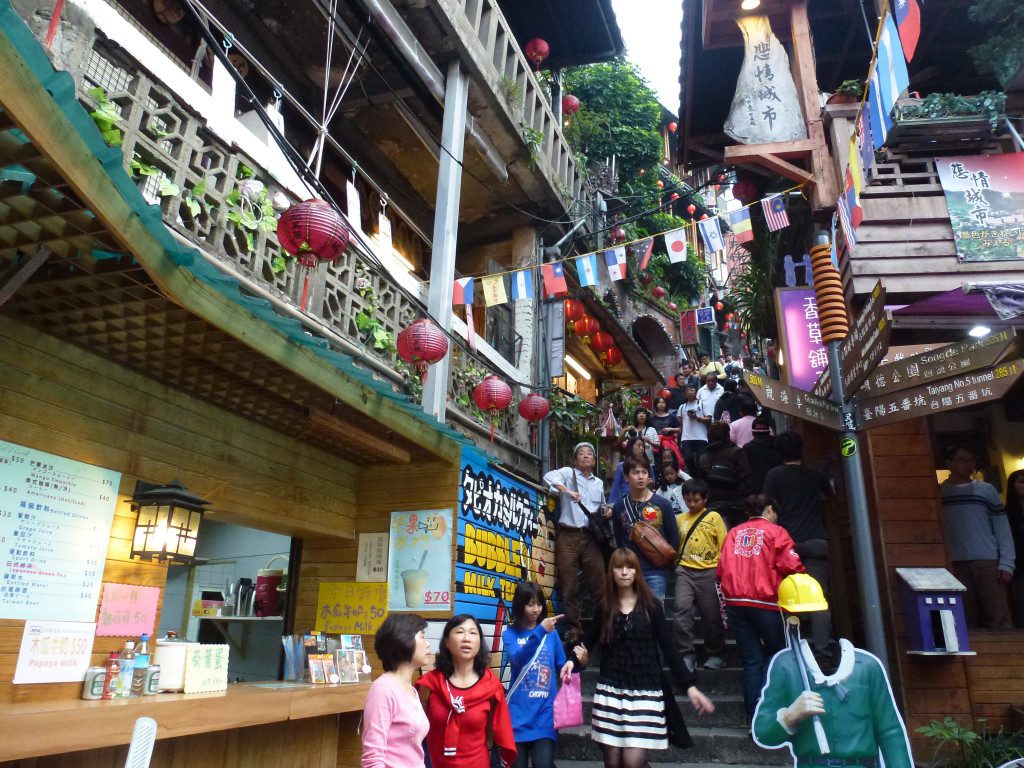 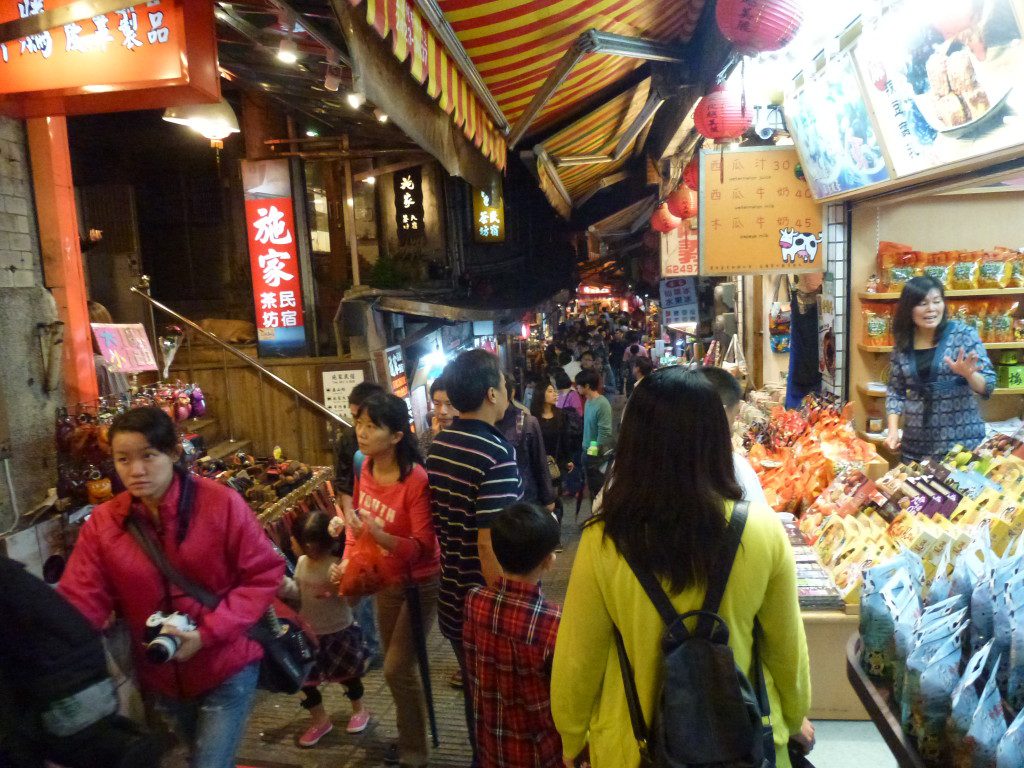 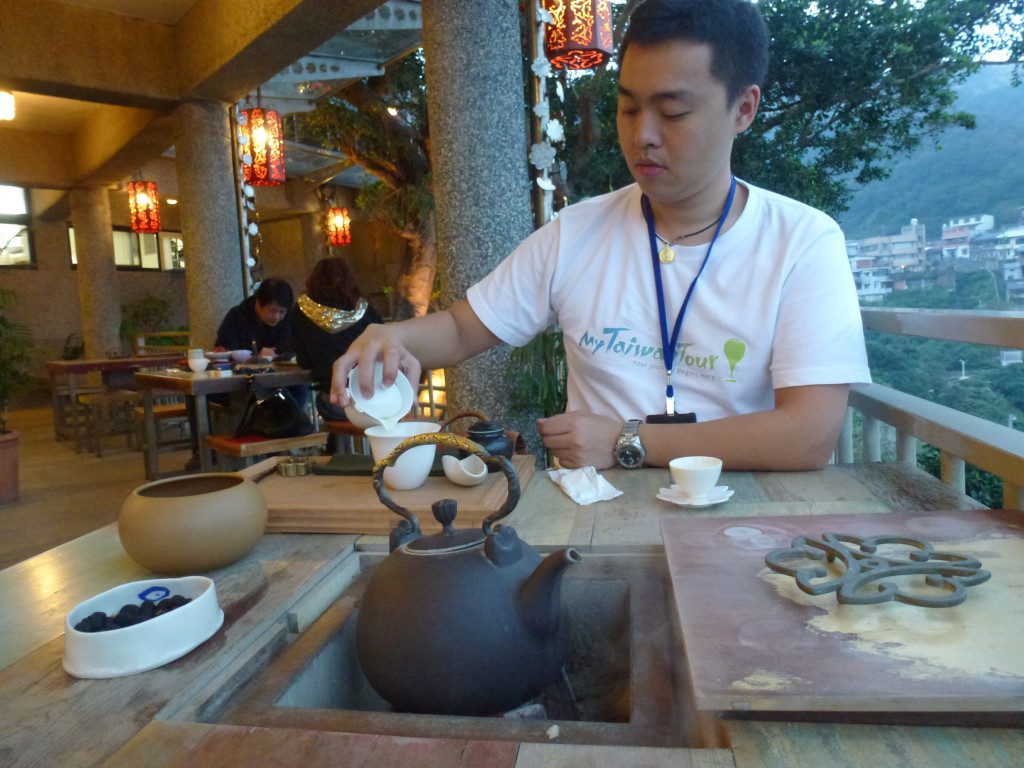 If you are grading this night market on its food alone it would not be ranked the best in Taiwan (I loved the local market in Hualien much more.) But as a place to experience the night market culture – the hustle of crowds enjoying local cuisine, stalls selling souvenirs, and the sparkling lights of businesses fighting for attention – Shilin is a must see.

Shilin was the only part of Taipei that reminded me of other parts of Asia – the atmosphere in the rest of the city was so calm I could think of nothing that compares. But in Shilin you are transported to the craziest market of Hong Kong’s Mongkok or a night market in Thailand’s Chiang Mai.

Shilin has a sense of humour too – a toilet humour, to be exact. I had heard of the Modern Toilet restaurant from other bloggers before I went to Taipei and, although I wasn’t specifically looking for it, when I saw the giant loo outside the Shilin premises I had to go in and take a look.

Just like Japan, themed restaurants are big in Taipei, including ones that mimic the bathroom. The restaurant seats were toilet vestibules, the table a giant bath. The poo-shaped pillows around the room made me giggle but I lost my appetite when I saw the ‘nappy’ coloured curry served in tiny toilets! 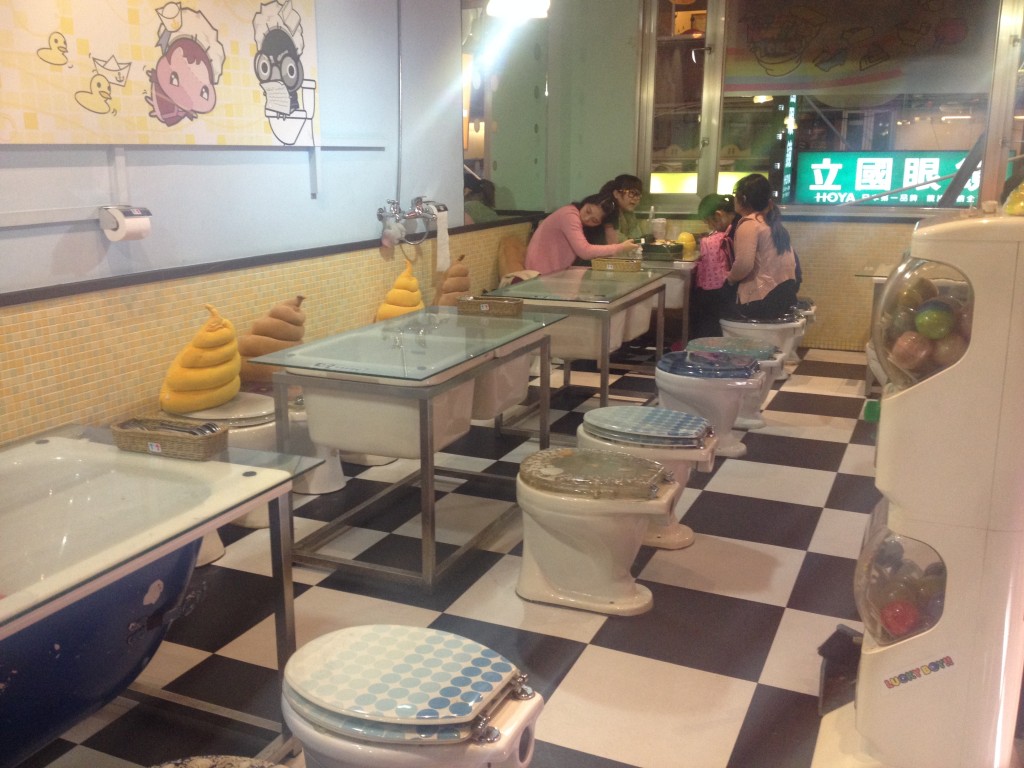 5. Sing your heart out at Partyworld/KTV

I thought we were pulling up to a hotel with a rather unusual name. The lobby of Partyworld was like many other hotel lobbies I had seen around the world, except everyone was flicking through florescent pink booklets in this one. With a glance at what appeared to be a guest book we could see the words ‘My Taiwan Tour’ next to the number 603. “That’s our room,” they said. 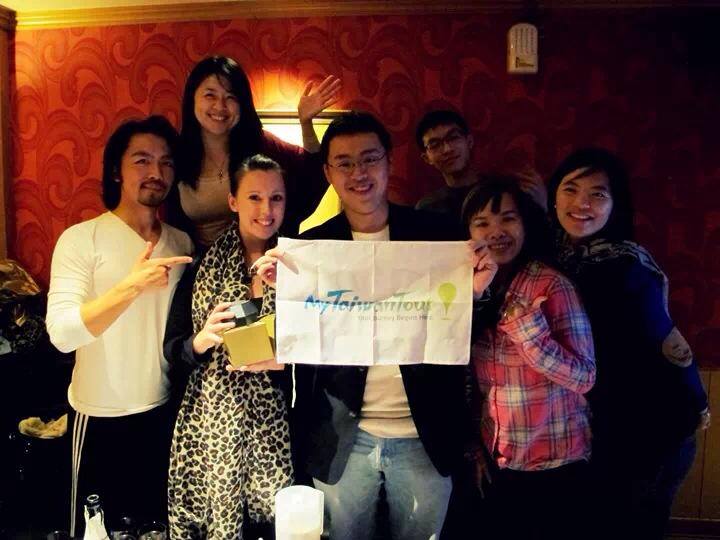 So, we took a lift to level 6 and entered the door as you would a hotel room. But inside there was no bed, just a large TV, couch, coffee table, and two shining silver microphones instead.

My first taste of KTV was everything I hoped and more. I scoured the booklet for some English language songs and loaded them up to the playlist. Drinks and snacks were ordered via the phone (a mixture of dumplings and onion rings) and a waiter appeared at the door in minutes.

I’ve been to private karaoke rooms in London like this, but none came with their own loo. Seriously, the room was ensuite, you never had to leave! And for the rest of the night we nearly didn’t – there were terrible renditions of Mariah Carey’s Hero and an unexpected cover of Barbie Girl!  Unlike the counterparts in London you don’t pay for the room by the hour in Taipei, the standard booking is 3 hours and costs approx. 500 NTD (that’s £10 -for a room that fits up to 8 people!). Extra hours can be booked and billed upon request – and request we did.

As we left the dark room, some hours later and somewhat hoarse, the lobby was buzzing with glam Taipei youngsters turning up for their sing. If this is how they party in Taipei, I’m up for coming every week!

Flights to Taipei via Hong Kong with Cathay Pacific start from £839 in Economy and £1399 for Premium Economy. Click here to read my review of the Premium Economy flight.  To book visit www.cathaypacific.co.uk.

I stayed in 2 different hotels during my time in Taipei. First I checked into the chic but basic – Just Sleep – a funky functional room best for doing exactly what it says on the tin – sleeping. Rooms at Just Sleep start from £68 per night.

For my last 2 nights in Taiwan I was a guest of the FX Hotel Taipei. With Elle TV in the lobby and lift, this hotel will definitely appeal to fashionable ladies. The modern décor in the room included eye-catching wallpaper and a mirror that conceals the TV, which totally caught me out. I discovered just how friendly the staff are when I called housekeeping to fix my TV and the boy politely revealed I should open the mirror-covered cupboard first!

I found rates for the FX Taipei from £70 per night as a late deal from booking.com.

The dynamic tour company who showed me Taipei (and more) were My Taiwan Tour. They run a tour perfect for those short of time, taking you to 10 Taipei sights (including 3 mentioned above) in just 1 day. The ultimate Taiwan day tour starts from 88 USD. 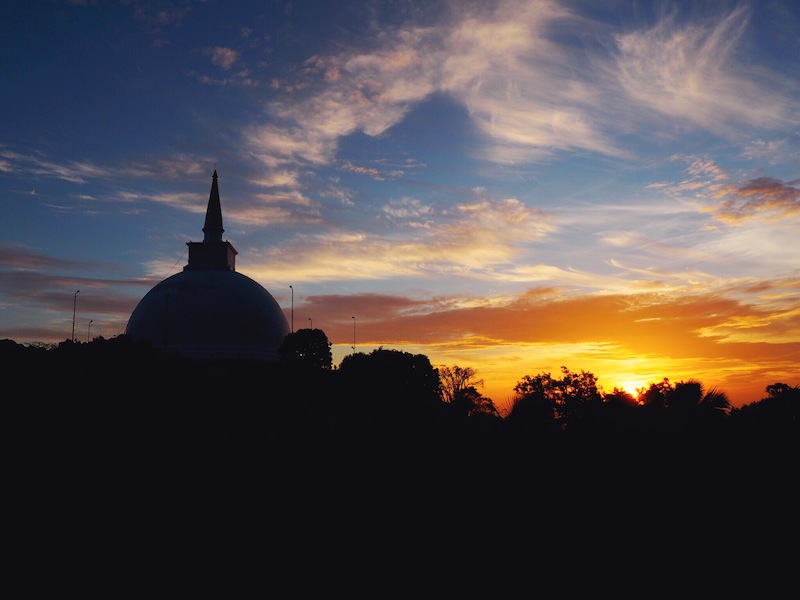 Starting 2014 With A Bang At Blogmanay