Sydney From A Seaplane: Our Scenic Flight With Sydney Seaplanes

It’s a very strange sensation to board an aircraft that is bobbing around on water, trying to find your sea legs before taking flight.

Yesterday was my first ever experience of flying in seaplane – a C208 Cessna Caravan named Corsair, to be exact. A scenic flight with Sydney seaplanes was my 30th birthday present from the Husband-To-Be, and it was a great present for this girl who loves flying as much as the city we live in. 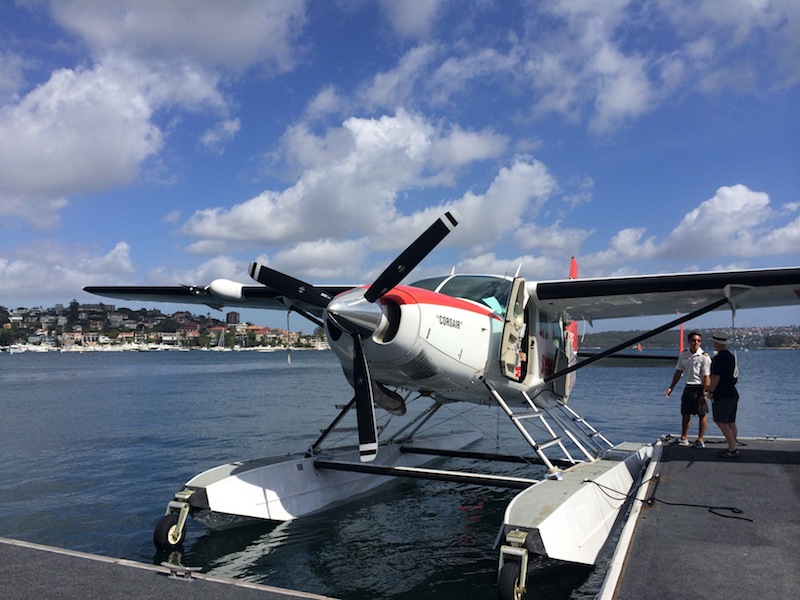 Our ride was named Corsair, after a classic Empire Flying Boat from 1937

Departing from Rose Bay (the location of Sydney’s first international airport and where the Empire Flying Boat used to depart for Southampton UK – a journey that took 10 days!) our 30-minute aerial tour of Sydney would take us along the Northern Beaches to Palm Beach and back for a loop of the Harbour.

The Corsair seats 8 and has 4 rows with 1 central aisle, so everyone gets a window. (One lady flew in the cockpit with the pilot after she sweetly asked him.) Justin and I were the last to board so took up position in the back seats, after wobbling our way in. 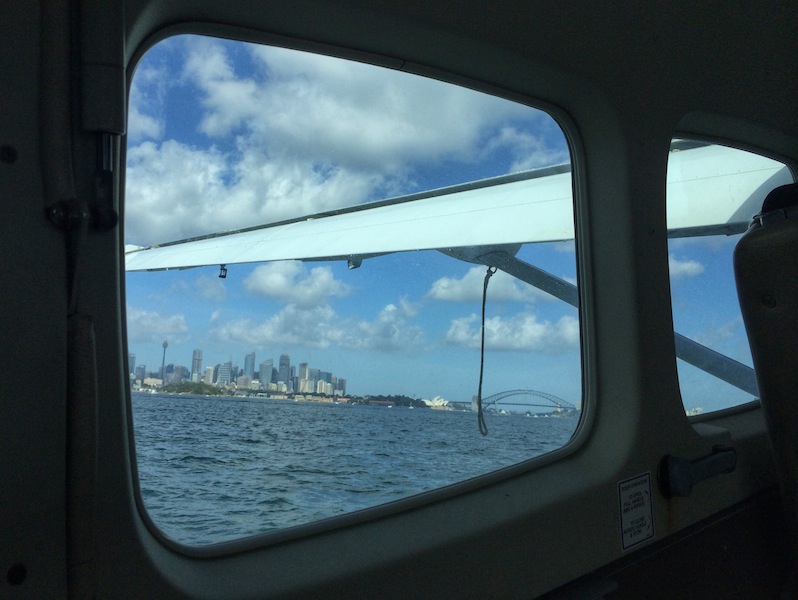 Floating into Sydney Harbour to prepare for take off

Take off is an exhilarating and surreal experience. Having sailed smoothly out into the harbour, the seaplane turns back to face Rose Bay and prepares for take off. With engines at full throttle we thrashed into the waves like a speedboat trying to thrill its passengers, until finally we stopped slapping back down to water and took off over it instead. Then the plane turned steeply to the left and off we flew, out past South Head. 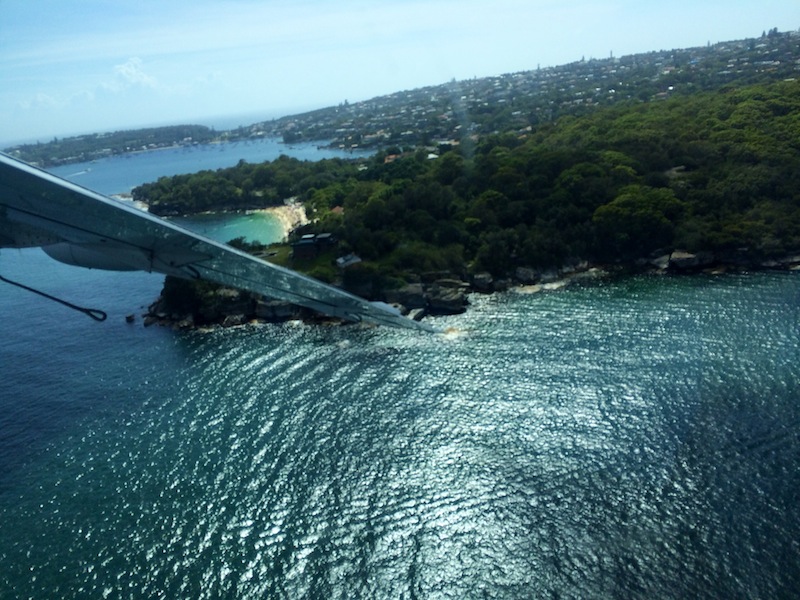 The pilot points out the beaches and national parks you pass on the way but a combination of there being so much to look at and the sound not being so sharp at the back of the plane meant I could hardly keep up. Instead I stared cross-eyed out the window and tried to name the places I recognised instead. 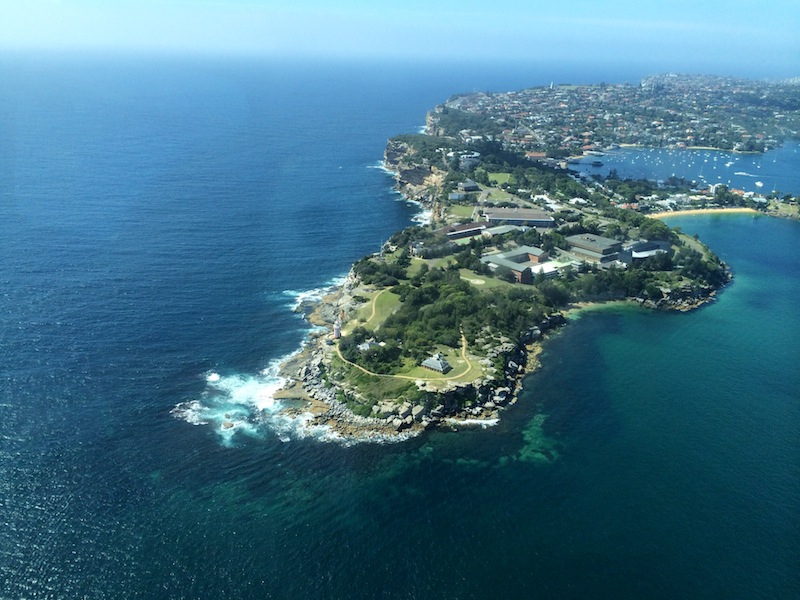 Passing South Head – you can just about see Hornby Lighthouse

The long white arch of Manly Beach was one of the most recognisable beaches we passed on our flight but it was by no means the most beautiful. From our altitude I could see surfers at Curl Curl, swimmers in the ocean pools at Avalon and Freshwater, and boats, so many boats, parked at every gorgeous cove throughout Pittwater. 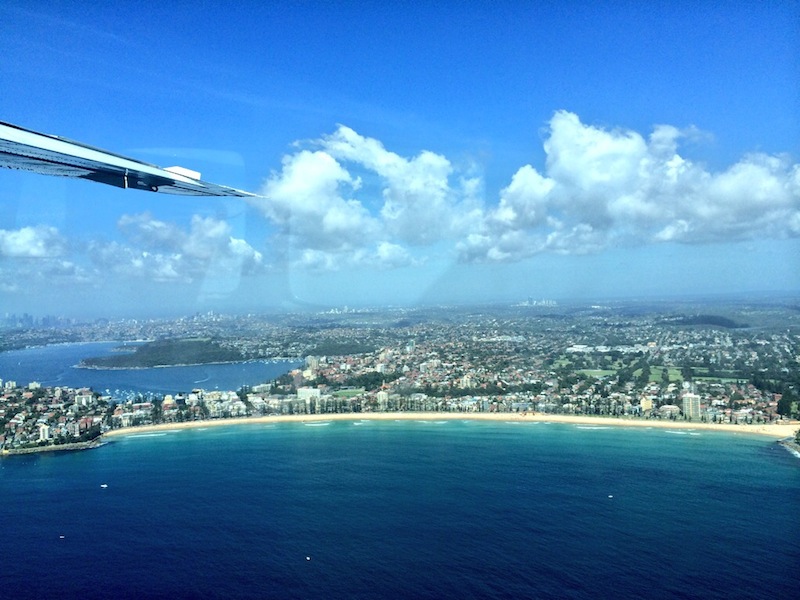 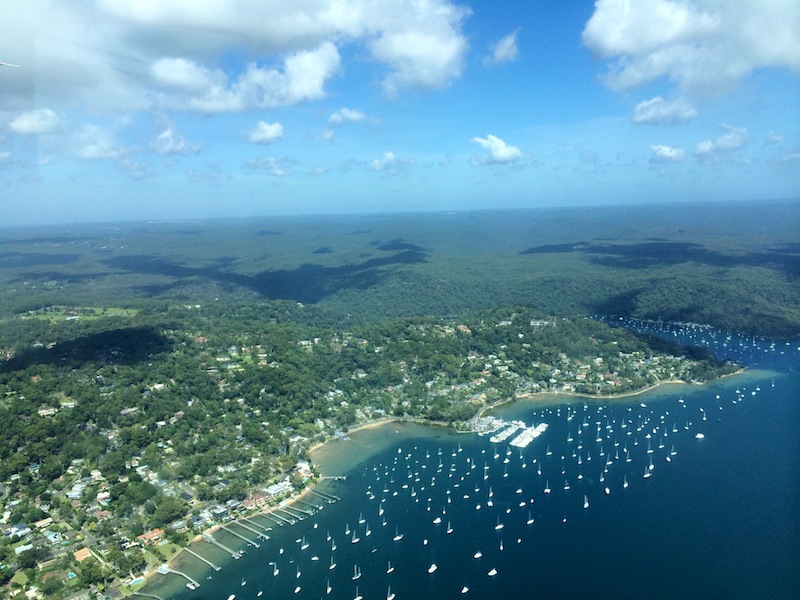 Just a few boats at Pittwater

Nearer Palm Beach (aka Home & Away’s Summer Bay) the plane dropped lower so we could admire the national park and varying shades of the water. Experiencing minor turbulence at this stage I made sure I knew where the sick bag was located. (Although luckily I didn’t need it in the end.) 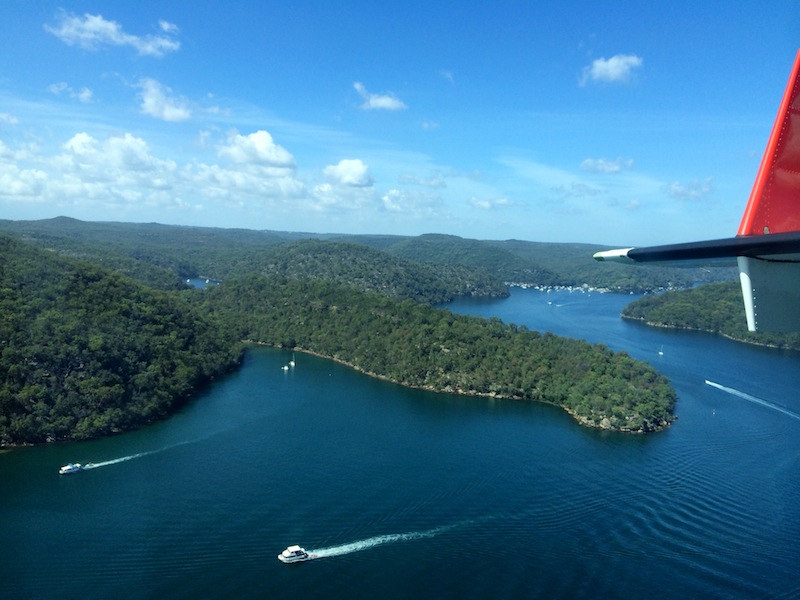 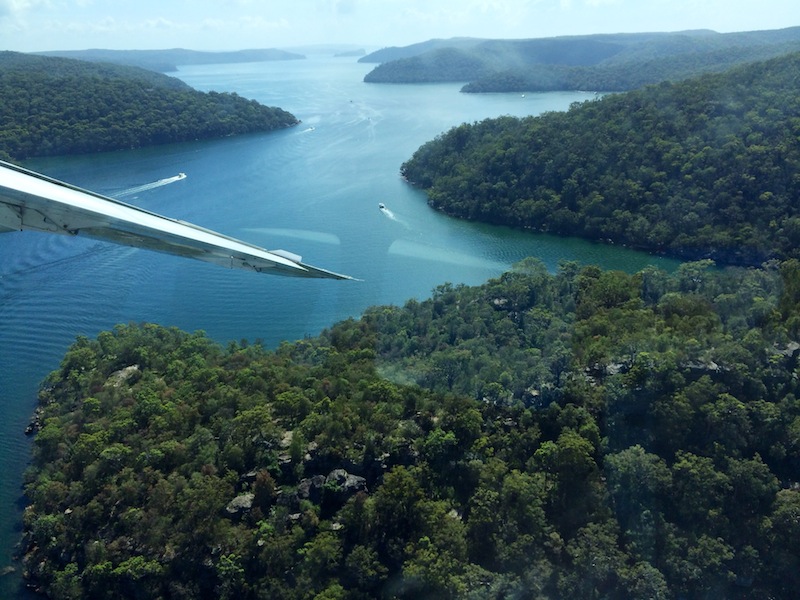 Zipping down for a closer look

As we swung past Palm Beach it was on my partner’s side of the plane. I launched myself nearer to get a better look, just as we left the iconic strip of land behind. At least I’ve explored it a couple of times on foot. 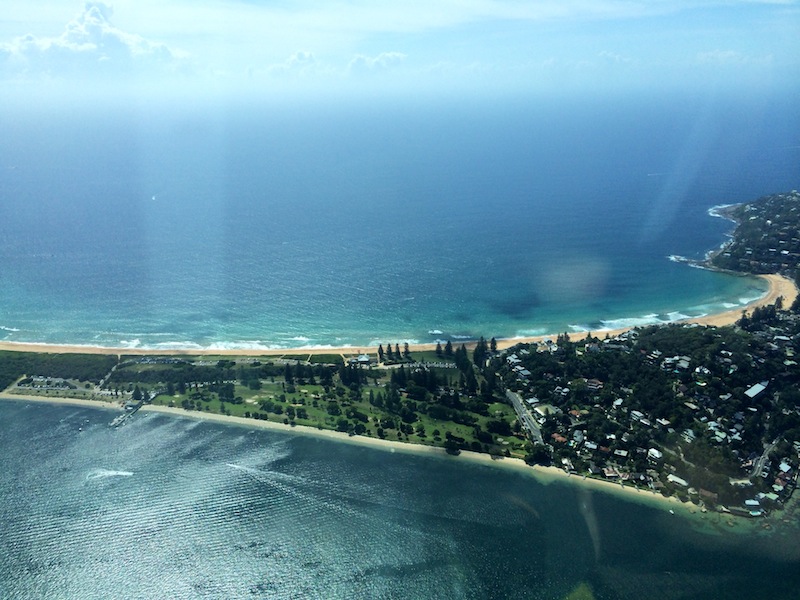 For the journey back to Sydney Harbour most of the scenery was on my side of the plane and I was able to take snaps of the sights I’d caught sight of through Justin’s window on the way there. Before long we were back in the harbour and heading straight for the Harbour Bridge. The seaplane doesn’t fly over it but circles the harbour from two different approaches, so both sides of the plane can get their share of bird’s eye views and photos. 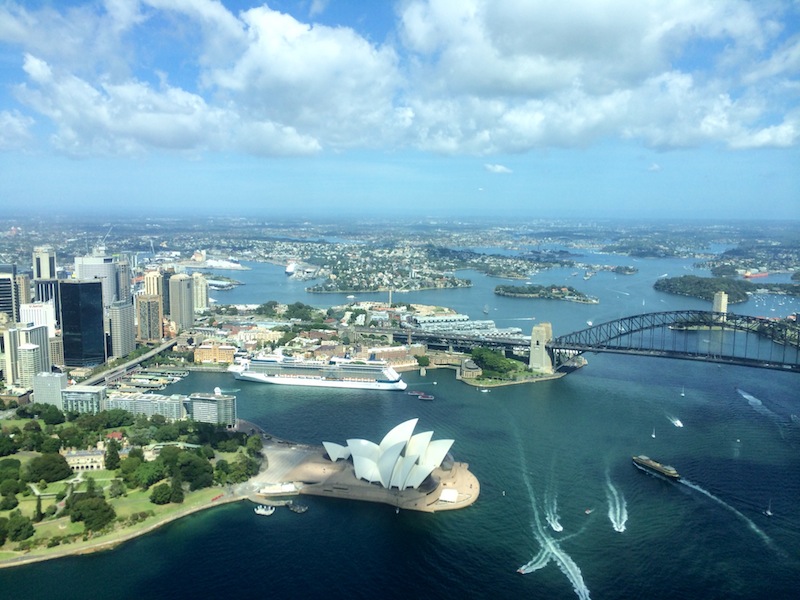 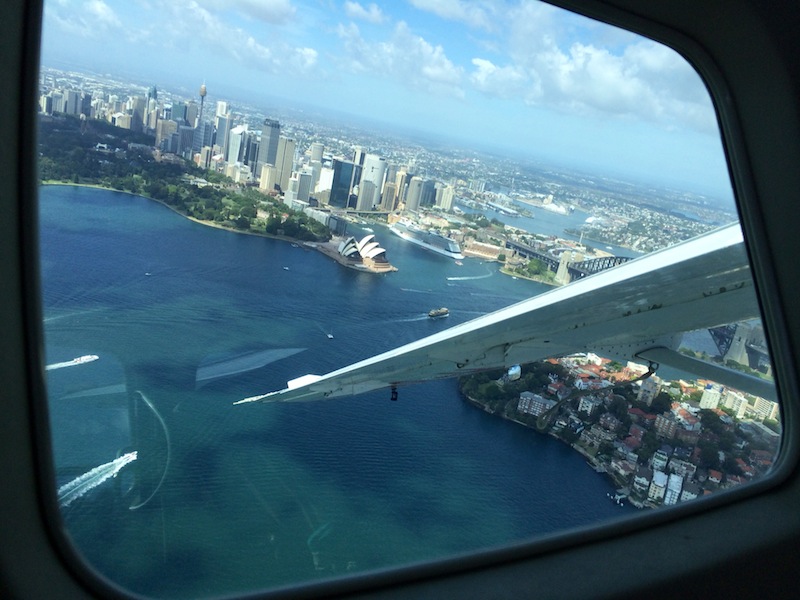 Before we knew it the plane was sweeping back down towards the water, landing gracefully on it, to the whoops of some men crewing a yacht nearby. From take-off prep to landing the whole experience took just under an hour. But what an incredible hour Sydney Seaplanes made it. 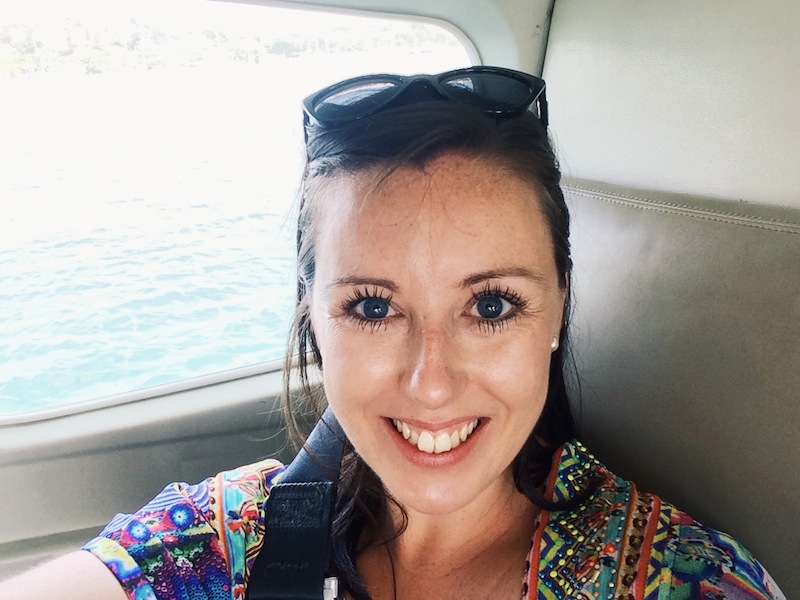 My elated face at landing

Read next: What To Do In Sydney – 21 Best Tours & Fun Activities 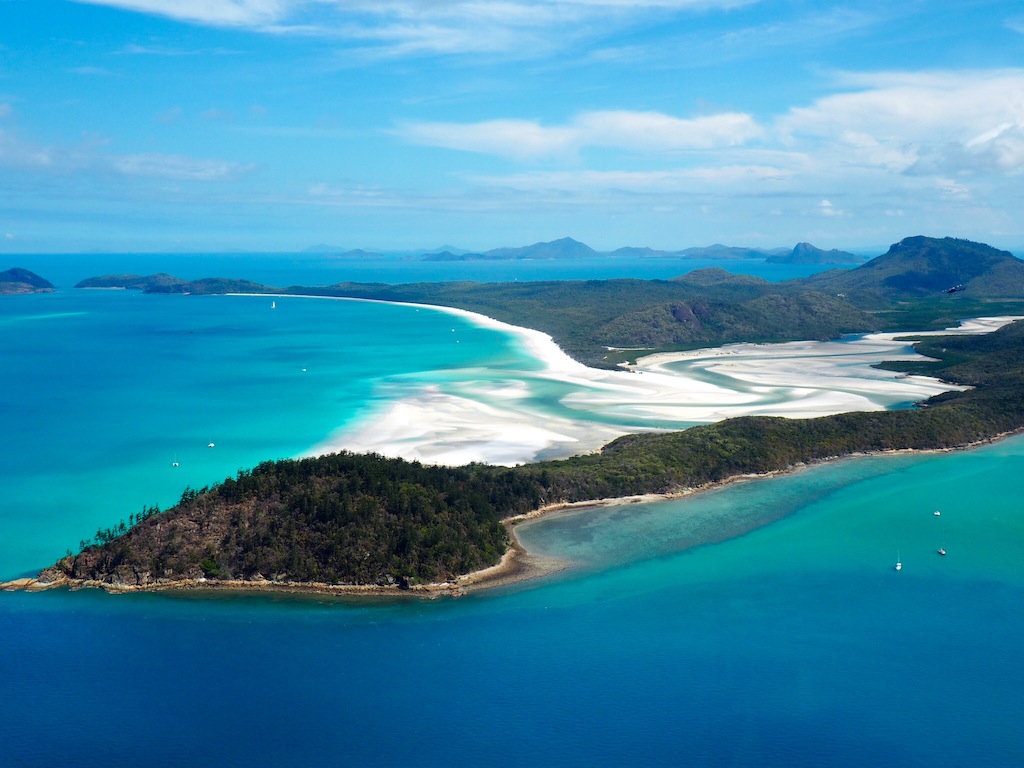 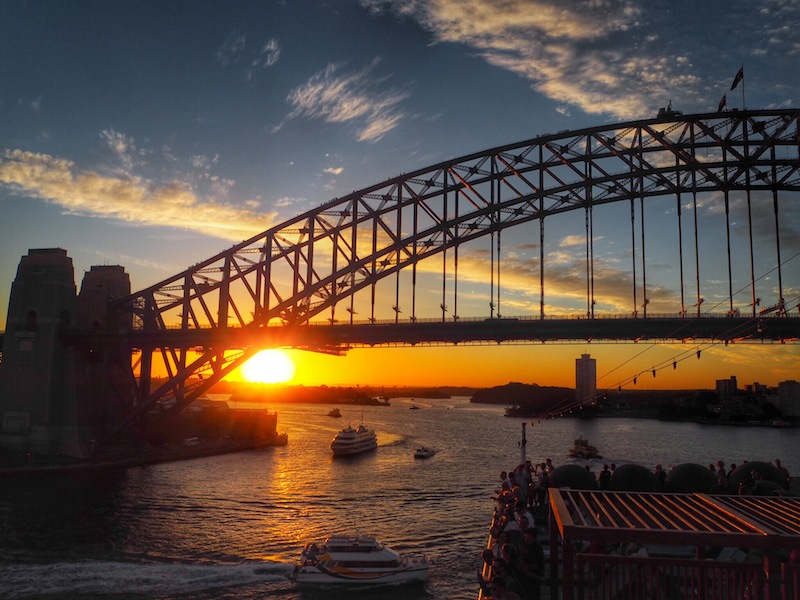 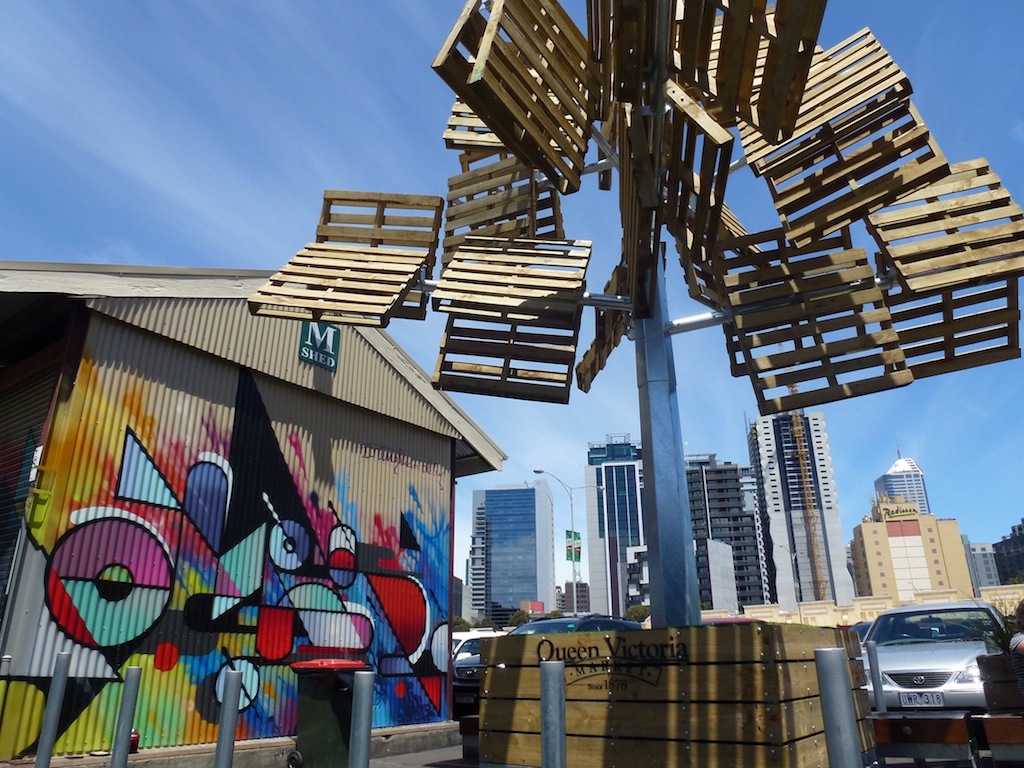 How To Bring Back That Lovin' Feeling For Blogging!