We Went To Freycinet And DIDN’T See Wineglass Bay

You know how some destinations just have this one big thing you can’t wait to see? Well Wineglass Bay in Tasmania was that place for me. Its combination of perfect crescent sand and sheltered waters flanked by pink and grey granite mountains have earned Wineglass Bay the reputation of being one of the world’s best beaches. To say I was excited to explore that secluded cove was an understatement.

Perhaps it was this anticipation that made our plans crumble under pressure. 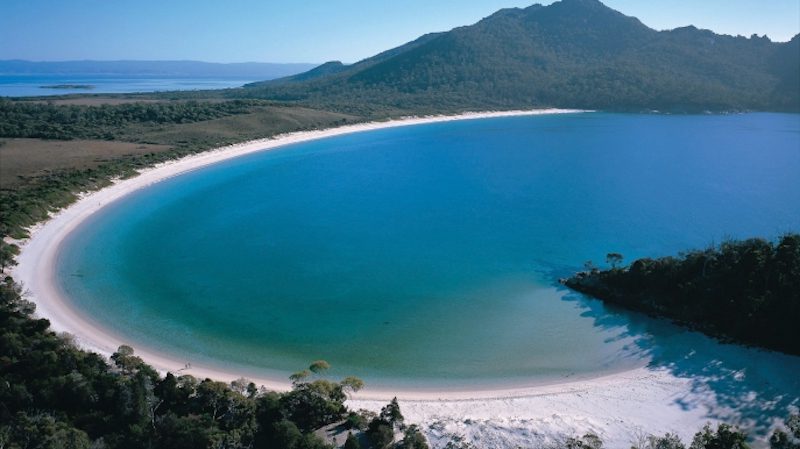 This is what we came for – Wineglass Bay by Tourism Tasmania

A big part of the problem was that we only had 2 days to play in Freycinet and I’ll admit that 2 days in Freycinet National Park, a ruggedly beautiful peninsula on Tasmania’s east coast, is not enough. Nowhere near it.

But as we wanted to make use of the public holiday last week and had to work within the limitations of Justin’s annual leave (real jobs hey!), 2 days in Freycinet and 1.5 in Hobart was all we had to play with.

As someone who prides herself on being a planner I thought I could handle this timeframe. Alas, nature did not want to play ball with my bullet-pointed itinerary. 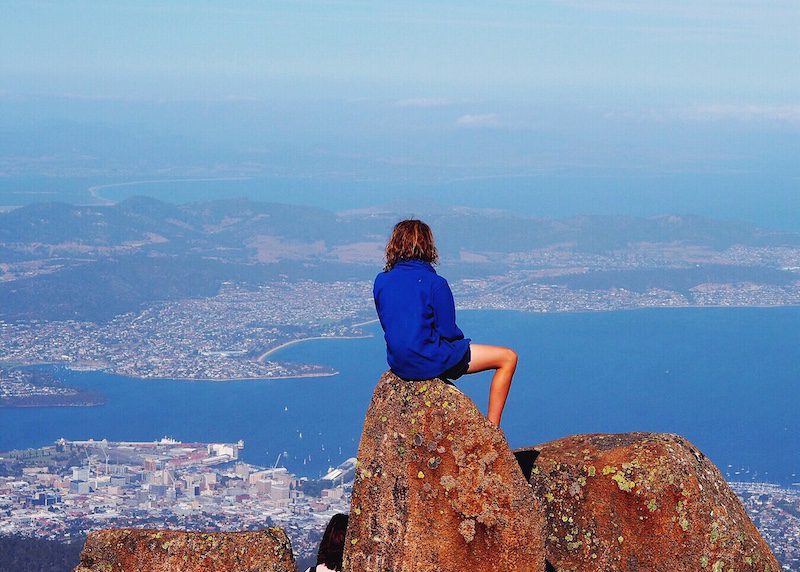 A kid enjoys the incredible views at Mount Wellington in Hobart

Our time in Tassie had started off spectacularly. We arrived on Thursday afternoon to a clear, warm summer’s day and headed straight up Mount Wellington to enjoy the views. That was the last time the weather was going to be on our side, unfortunately.

After a great time in Hobart (that I shall blog about shortly) we begun to make our way to Freycinet, where, keen to get the most show-stopping views of all the famous bays and granite mountains in the region, I had booked a scenic flight with Freycinet Air.

After reading reviews online it seemed that this was categorically the best way to observe nature’s great work at Wineglass Bay. I’d booked the flight for mid-afternoon but after getting a call from the pilot who was worried about cloud cover it was bought forward to midday. 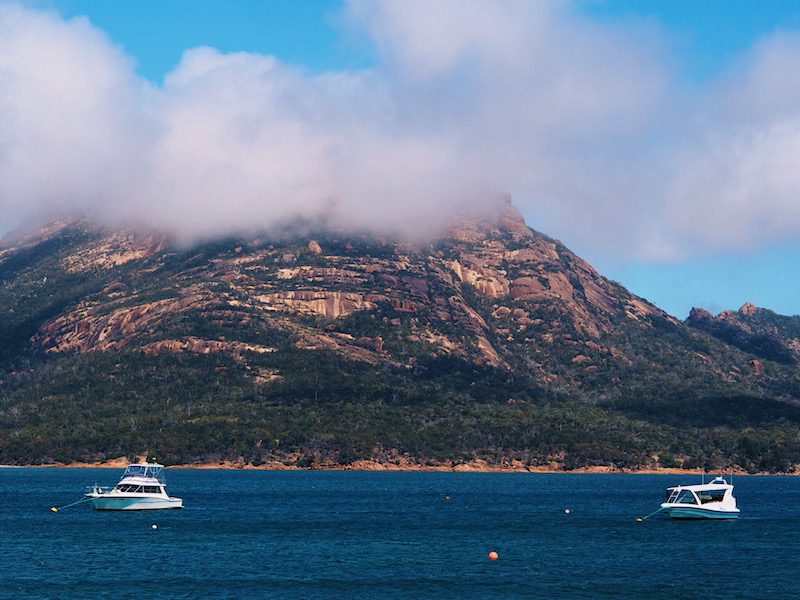 Use your imagination to draw in the peaks of the Hazards Mountains here :p

It’s a 2.5hr scenic drive from Hobart to Freycinet and it would have been thoroughly enjoyable if we weren’t up against the clock. After a quick brekkie stop at Salamanca Market, we hit the winding road to Freycinet as fast as we safely (and legally) could. I glanced wistfully at wineries, beaches and bakeries we would have stopped at according to the original itinerary but the air field was calling. We arrived dusty and in need of a wee just in time for our flight…. which was cancelled.

Despite clear blue skies all across the national park, the peninsular had a steady stream of low-lying cloud clinging to the peaks of the Hazard Mountains and thus, the guys explained, making a scenic flight pointless. We rebooked in for the same time tomorrow hoping conditions might improve (they didn’t) and then set off to kill the 4 hours we had free before we could check into (and change at) our accommodation. 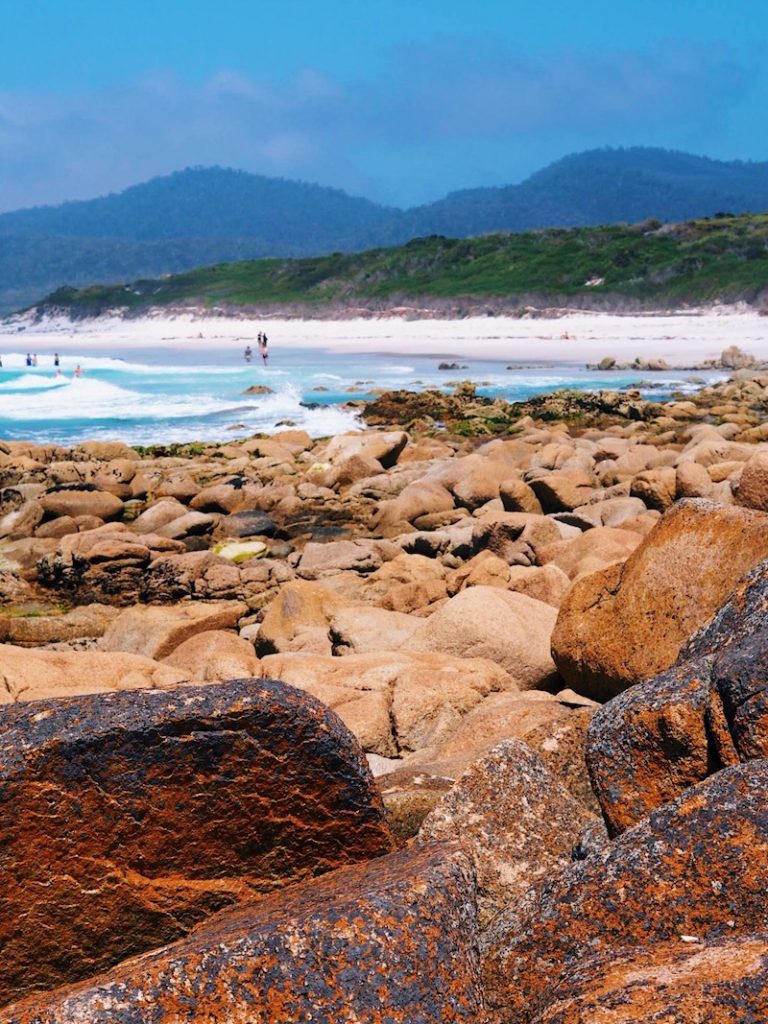 Friendly Beaches – THIS is the Freycinet I imagined

The Freycinet Air office is right near Friendly Beaches so we decided to take a peek at them (if only for the name, really!). After figuring out how to pay for the Parks Pass (an uncomplicated system of placing cash in an envelope next to the park entrance that completely threw me) we made our way down the unsealed road to the beach. This was the first time we had left the car since Hobart and it was everything I imagined Freycinet to be – orange boulders, wild hills, long empty swathes of white sand and toe-curlingly cold waters.

For lunch, we headed to Coles Bay, which rather than the commercialised tourist hub I pictured, turned out to be a quaint collection of waterfront houses with a grand total of one café and one convenience store in the ‘town centre’. That café (Geographe Restaurant and Espresso Bar) served tasty coffees and wood-fire pizzas in an outdoor area with prime views of the Hazard Mountains, or at least it would have done if not for the pesky clouds. 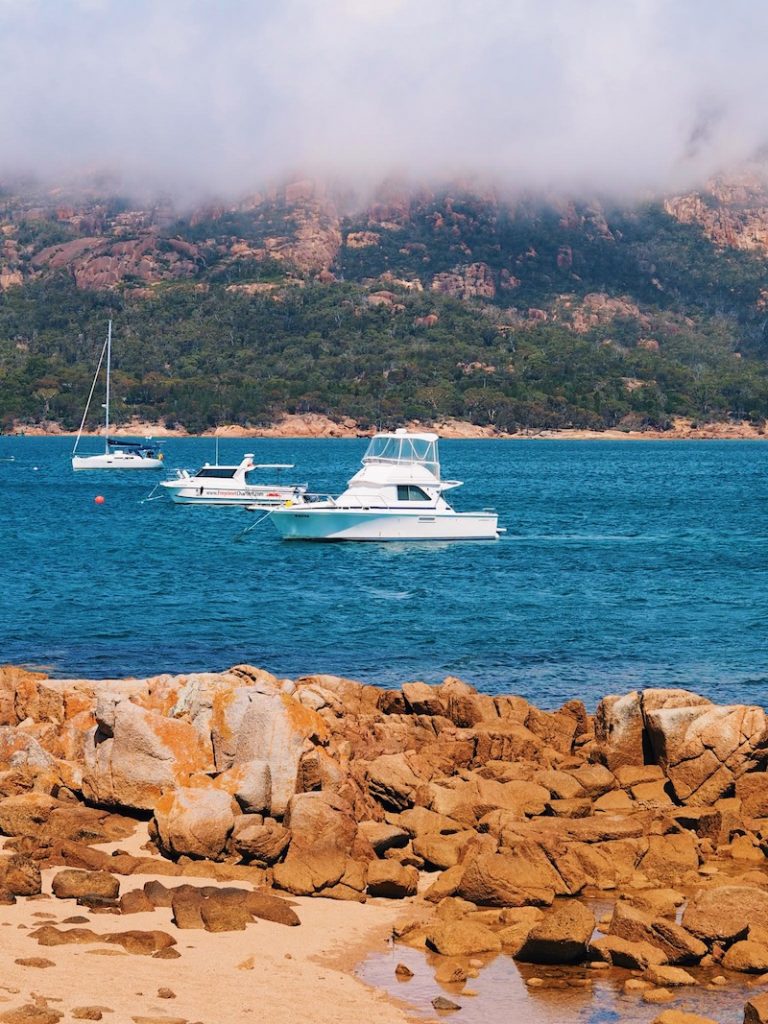 Clouds cling to the Hazards as seen from Coles Bay

Closer to this unusual weather pattern it felt like the sky here was on fast forward. The clouds over the peninsula were so low-lying you could watch them whizz past just over your head. It was almost dizzying to watch the stream of clouds that never end and watch them I did for I was dying to see a small crack that might mean better visibility was coming.

The weather was baffling to be honest. Over at our beach house (a corker of a place I found on booking.com with sea views on two sides) the skies were 100% clear, so I raised the idea of hiking to the Wineglass Bay lookout just before sunset. (In truth, a last-minute bid to try and salvage a day I was starting to feel had been wasted.) 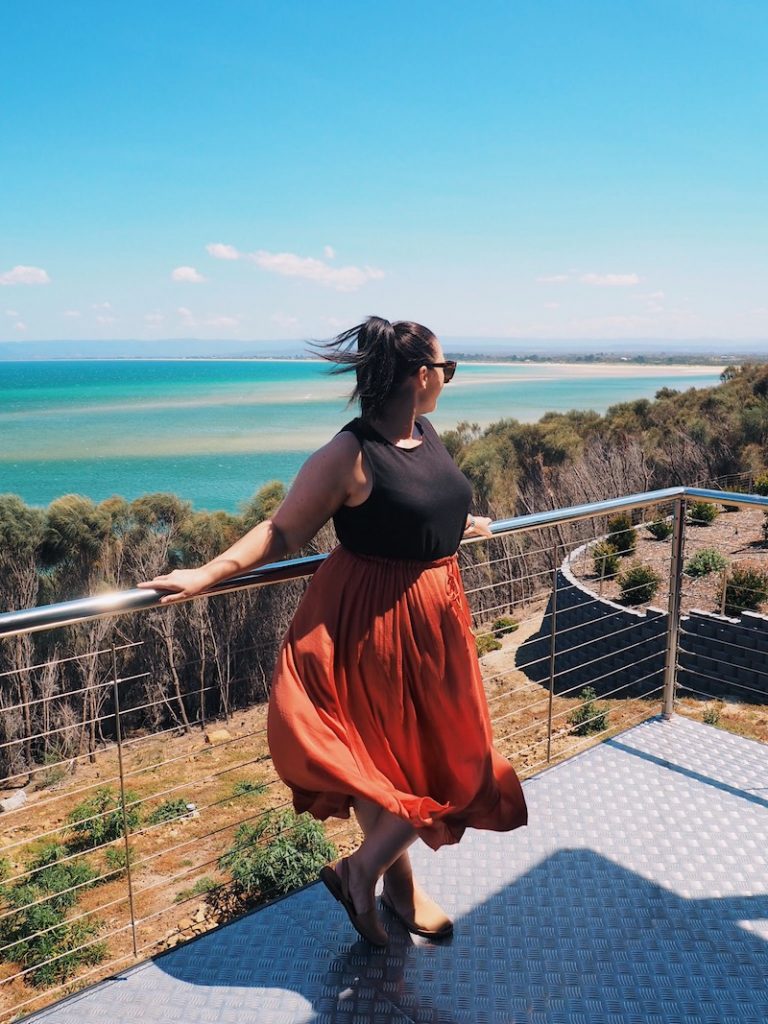 Justin acquiesced so we donned active wear and trainers and headed back into the national park. Parking in the deceptively named Wineglass Bay car park we said hello to a wallaby and begun the 45-minute climb to the Wineglass Bay lookout. (The beach itself is approx 2.5 hours return on foot.) I’d read that the hike to the lookout is more challenging than the signs suggest so I was prepared to put in a little puff. In the end, we reached the top in just under 35 minutes with me taking only 2 ‘my lungs are imploding’ breaks.

Making friends on the way to Wineglass Bay Lookout

I think it was the anticipation of what we might see from the top that kept me going. I took the last few steps 2 at a time and almost bounced to the lookout where we walked to the edge and saw… absolutely nothing. 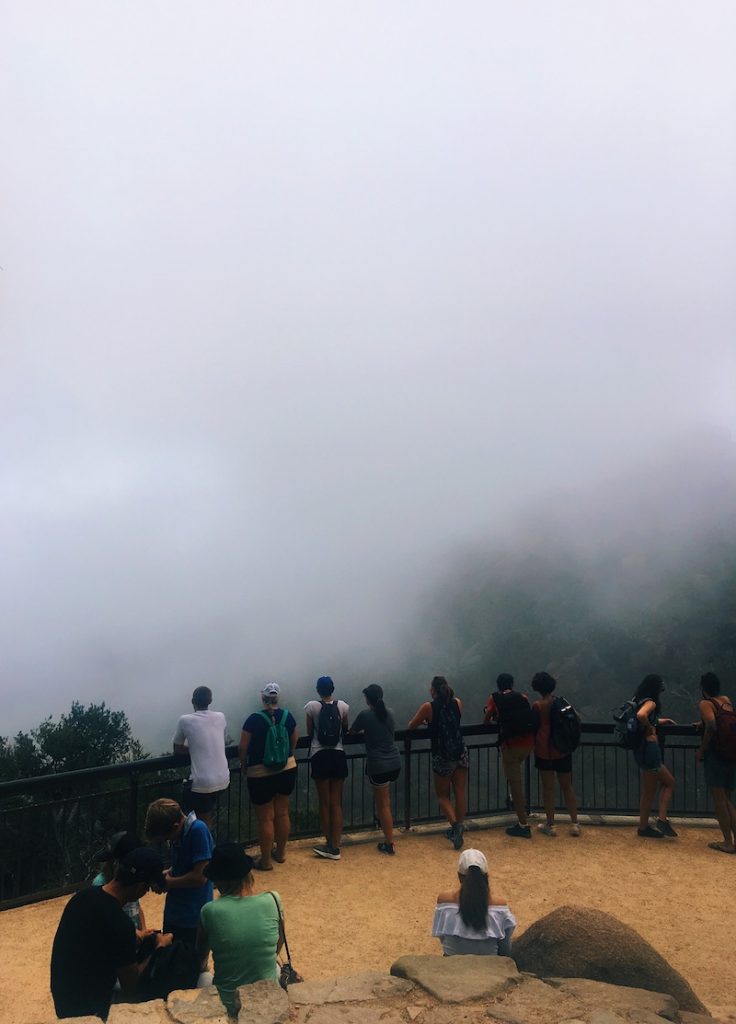 Where are you Wineglass Bay? 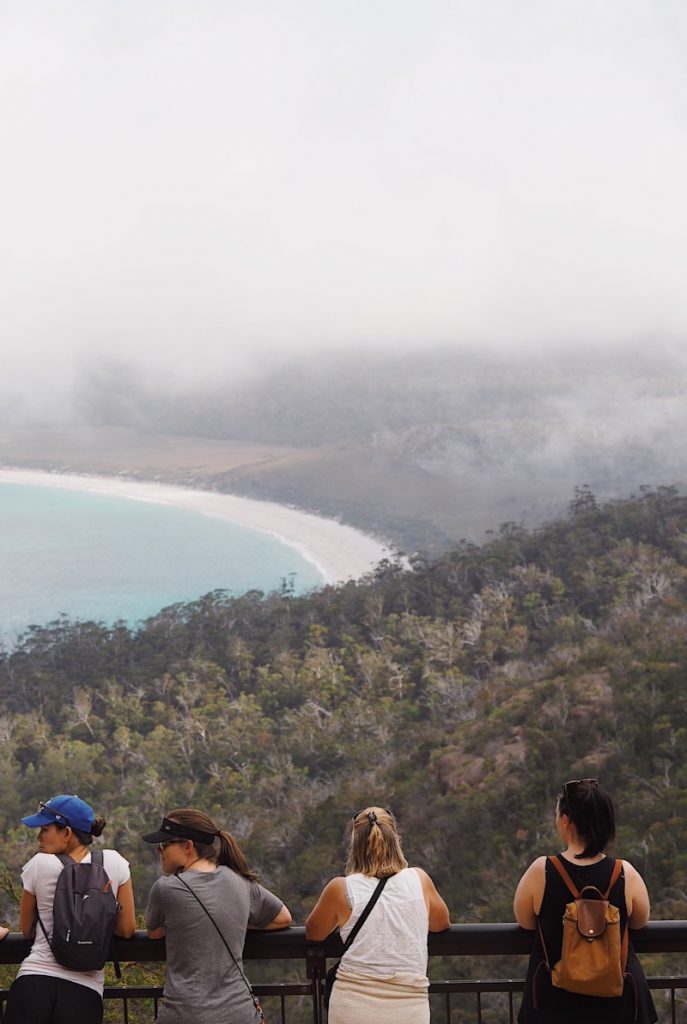 Hanging onto the last threads of hope

Wineglass Bay is on the opposite side of the Hazard Mountains from Coles Bay and, it transpires, the clouds were even worse down there.

Not one to lose hope quickly we stayed at the lookout for a good 30 minutes hoping to get a glimpse of the famous crescent. There was one tiny moment when the clouds thinned a little, the light hit the sand and you could imagine how gorgeous this would look on a clear day. And then it was gone again. 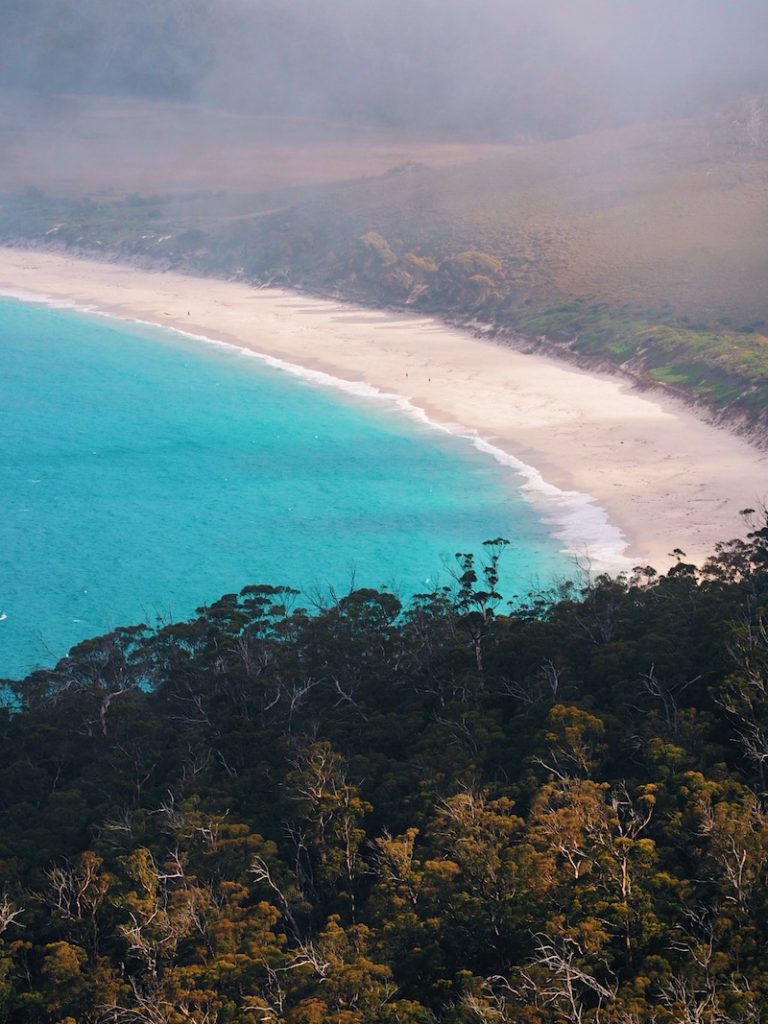 After taking a few photos, inexplicably tripping over my own feet in the process, we made our way back down, feeling that our efforts may not have been thoroughly rewarded by the views but at least we’d earned ourselves a cold glass of something alcoholic. 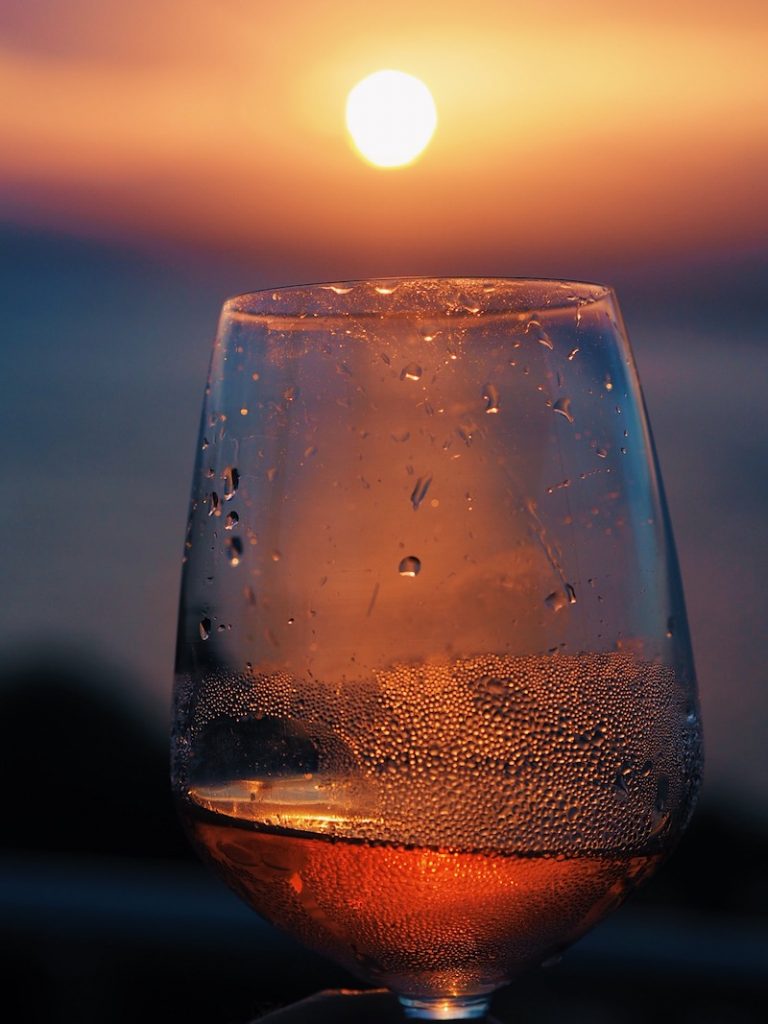 Read next: What to do and where to stay in Coles Bay and Freycinet

Innsbruck, Austria – not boring at all!