When I was a backpacker travelling the east coast of Australia, due to time and budget constraints, I spent a grand total of a day at the Great Barrier Reef. Considering the reef stretches for over 2000 kilometres, is home to tens of thousands species of fish, coral and marine life, and recognised as one of the world’s natural wonders, it makes me feel a little silly to think about the 1 day I granted it. (*Insert blushing emoji!*) 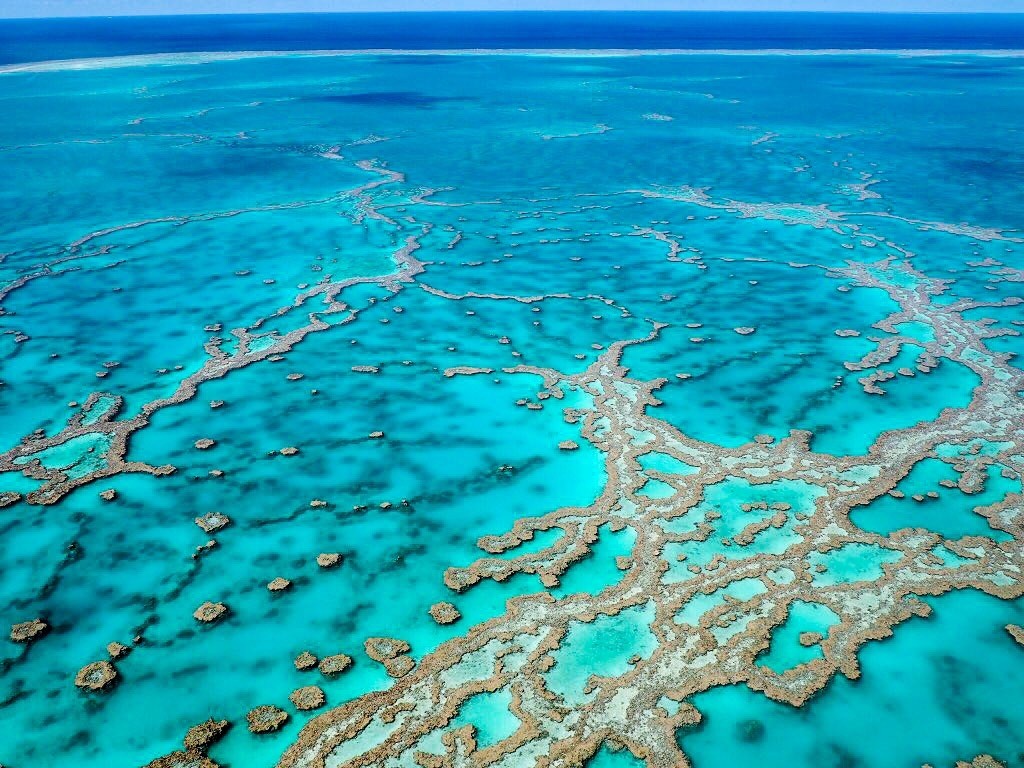 Staggering sight – The Great Barrier Reef from above

Luckily for me, the fact that I now live in Australia and work as a travel blogger, gave me the chance to rectify that situation. Round The World Experts got in touch about sending me on a blog trip to the Great Barrier Reef and they had some awesome suggestions to make sure I would see the best of it second time around.

If you’re planning a visit to the Great Barrier Reef, here are 3 incredible experiences you won’t want to miss.

Did you know you can spend the night on the Great Barrier Reef? Nope? Me neither. When I first heard of Reef Sleep I assumed it was either an overnight boat trip or perhaps a hammock they were going to hang over the corals for me. It turns out it was neither. 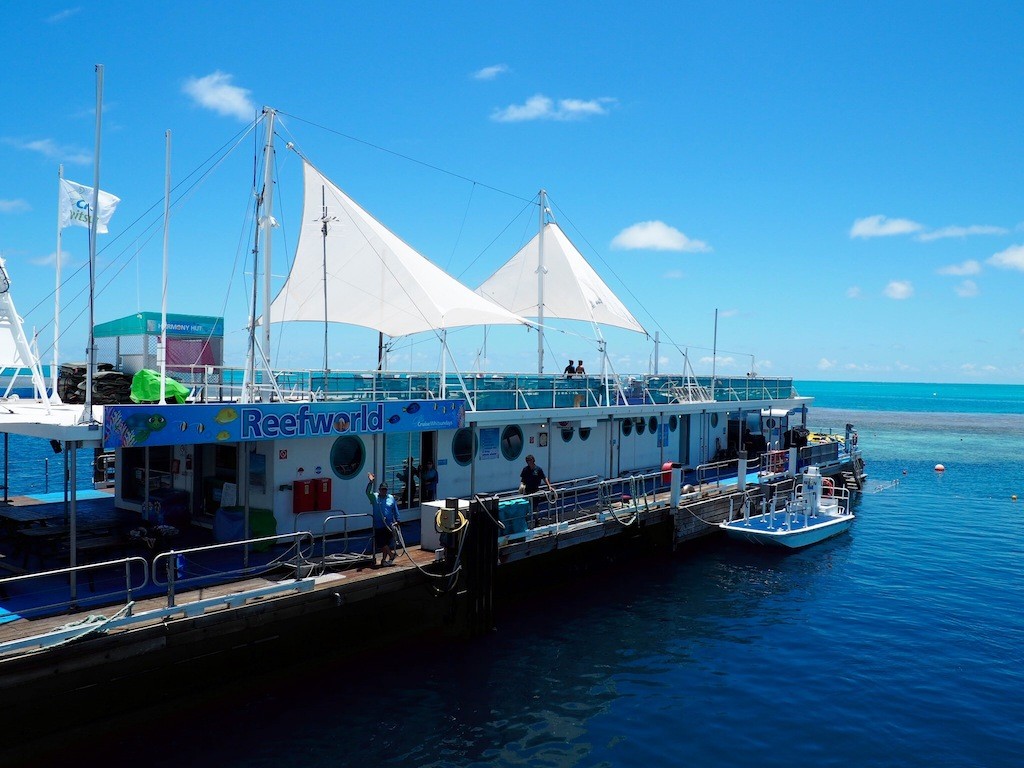 Reef Sleep is an experience run by Cruise Whitsundays at their Reef World pontoon over Hardy Reef. Reef World is a hub of water-based activities with facilities that include an underwater observatory and rides on a semi-submersible. Each night it also turns into a hotel of sorts, as 9 lucky guests are invited to stay the night in swags that are laid out on the top deck. 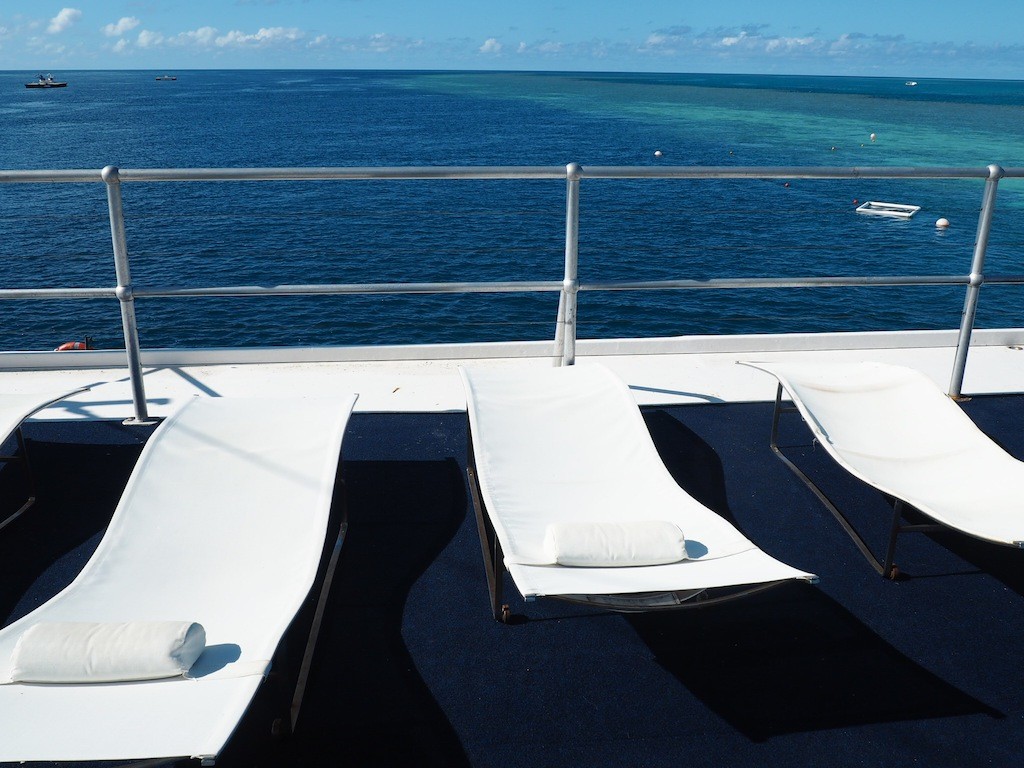 The Sun Deck at Reef World 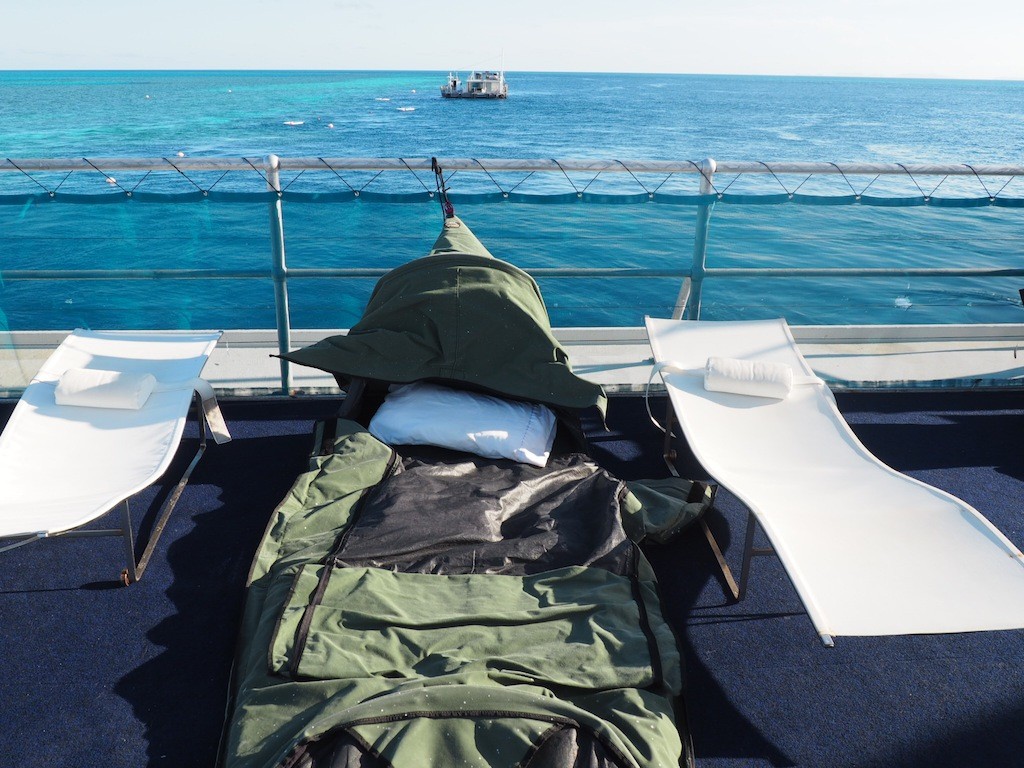 My ‘bedroom’ at Reef Sleep

Aside from entitling you to boast you have now slept on the Great Barrier Reef, Reef Sleep gives you the incredible opportunity of seeing sunrise over the ocean and snorkelling the reef when it is teeming with marine life and not so many humans. As the sun acts as a natural alarm, illuminating the swags with a red glow, I was literally up at the crack of dawn to watch its spectacular show. 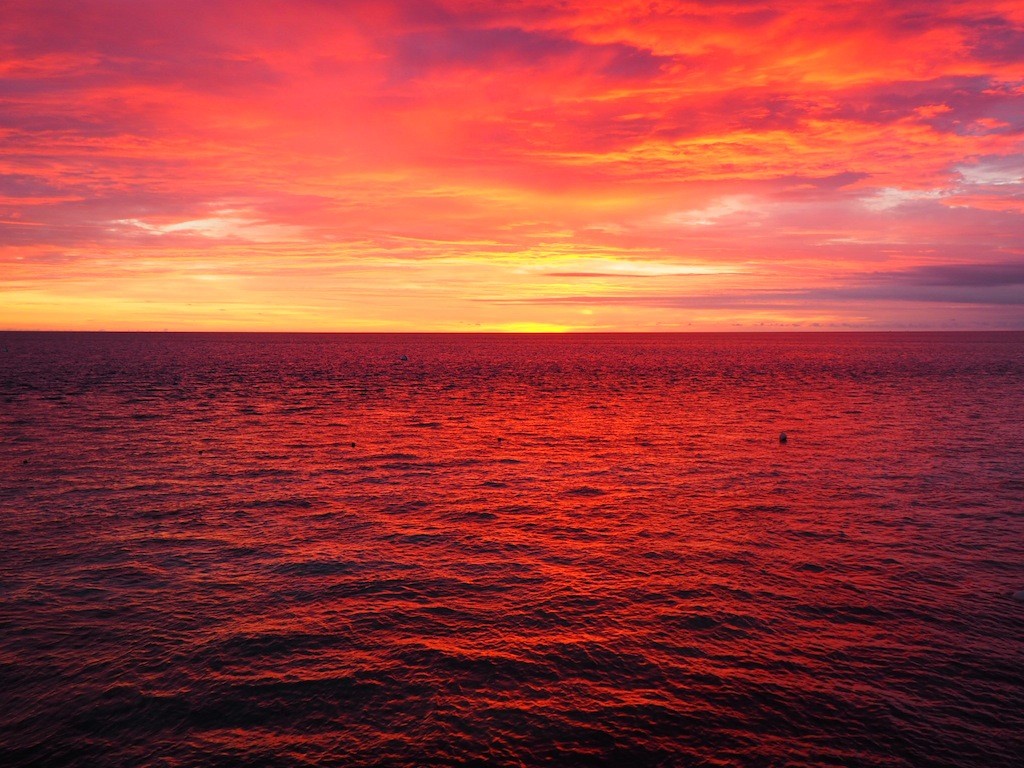 Sunrise over the Great Barrier Reef 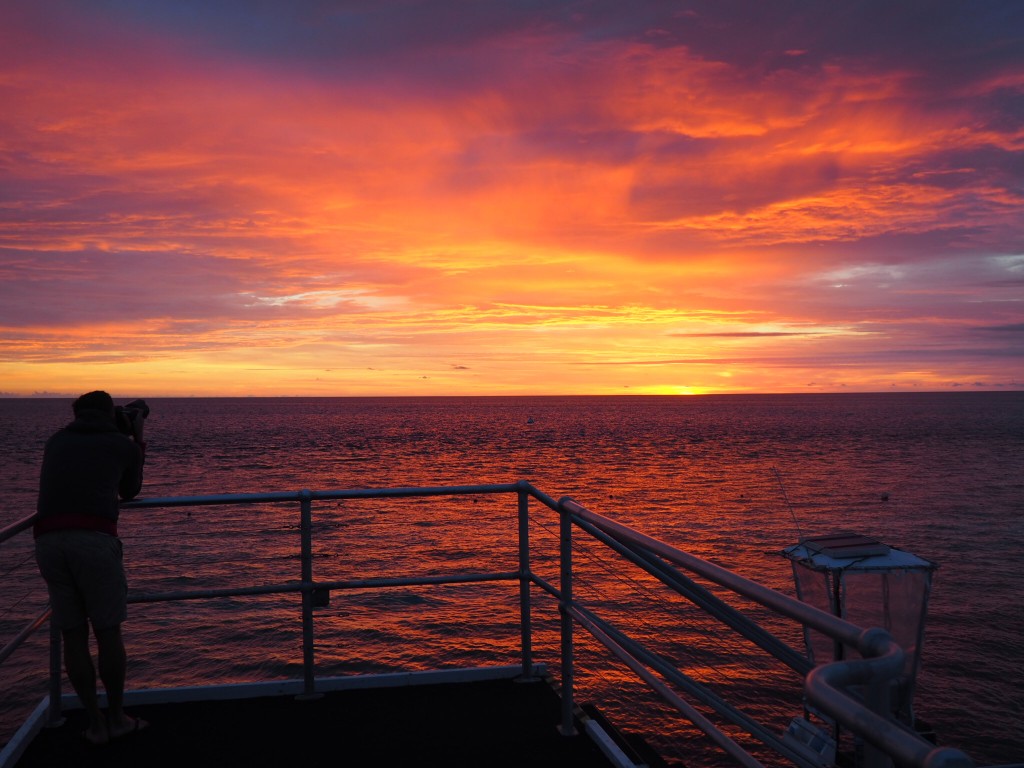 A fellow guest soaks up the scene

Then you have ample time to get in the water when it’s just you and hundreds of fish. The difference between snorkelling in the afternoon when the other visitors were around versus first thing in the morning when it was just us 9 guests was staggering. I was surrounded by schools of fish who would swim right up to my lens, even a sea turtle lazily passed by. 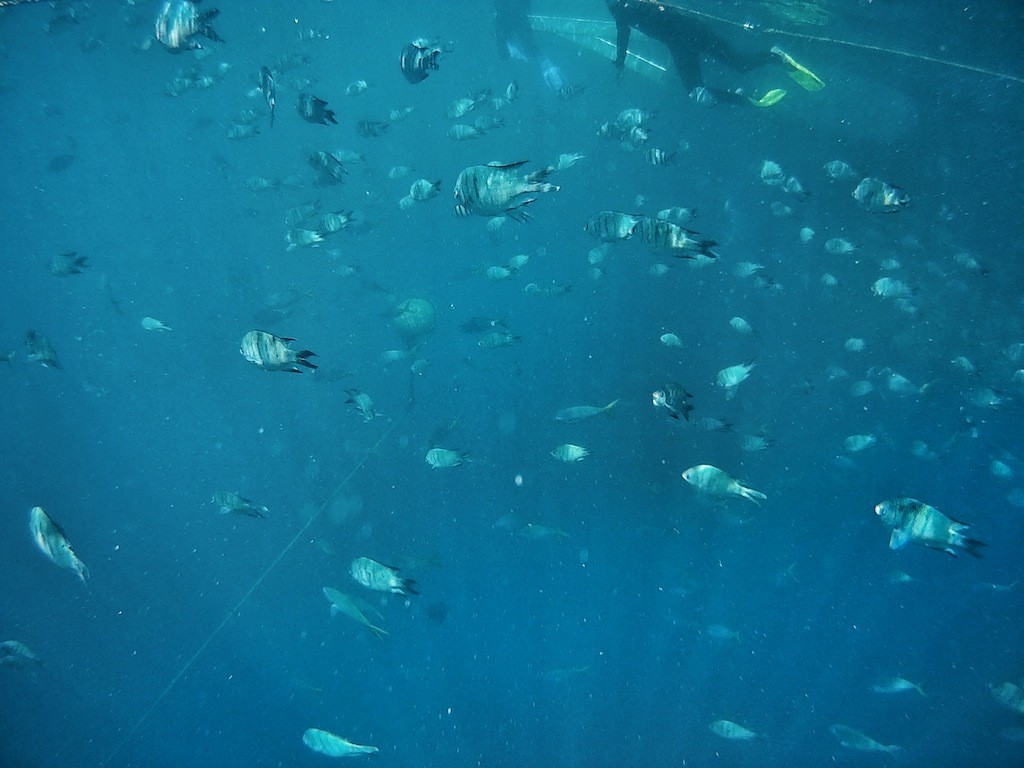 Rush hour for fishes at the Great Barrier Reef

The team at Reef Sleep are also spectacular. There are two caretakers and a host on board who split duties including keeping an eye on guests whenever you enter the water and cooking up incredible Aussie feasts on the BBQ ready for when you come out. There’s also hot showers on board and bedding provided in the swags – it’s got to be one of the comfiest ways to sleep in such close proximity to this natural wonder. 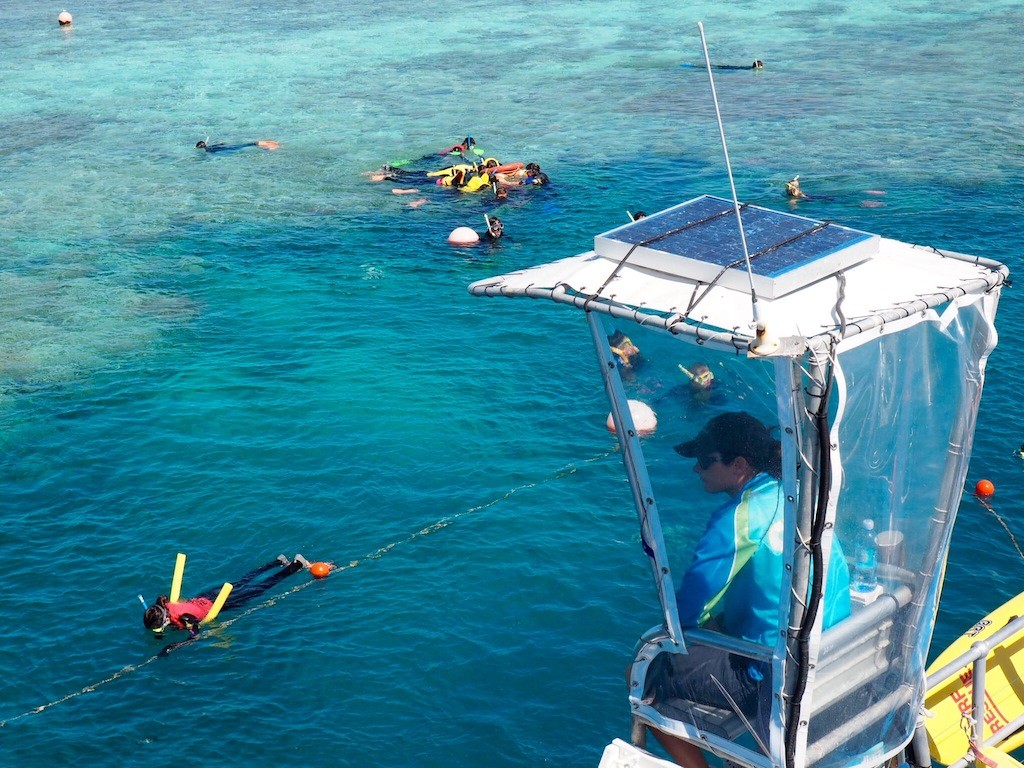 The team at Reef World look out for snorkellers

Also on this trip I had my first ever SCUBA experience. I’d always been a bit nervous of trying SCUBA in open water but reasoned that if anywhere is a good place to give it a shot the Great Barrier Reef would be it.

Cruise Whitsundays have an energetic team of professionals who run introductory and advanced SCUBA dives from Reef World. They are adept at putting nervous beginners like myself at ease with encouragement and bad jokes (they’ll admit that!). My basic training took place on the transfer boat over to the pontoon so when my allotted time for the dive came up we got straight into the water.

Under the pontoon is a shallow pool where you practise breathing with the equipment. I was nervous about understanding all the different gauges and flotation devices but the team take care of all of this for you. I was assigned to Cassandra and after she was satisfied I’d got the hang of breathing she determinedly led me off pontoon and into the deep blue water. 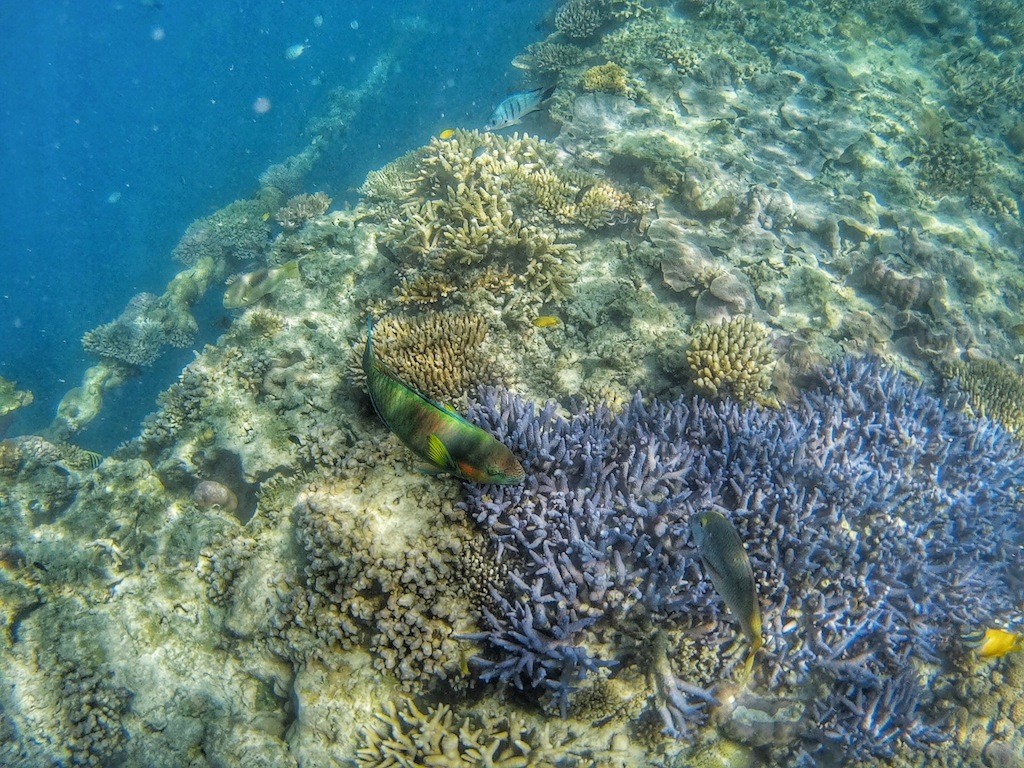 At this point, I’ll admit, I tried to turn back. The team had warned us that the first few minutes would be the most terrifying as we have to travel from the deep water under the pontoon towards the shallow reef, but I was more concerned about forgetting to breath and equalising than the depth of the water. I wanted to go back and have more lessons – but Cassandra was determined, I had to learn by doing. Holding my hand she swam on and there was nothing for me to do but float along with her. After a while it dawned on me that I was still breathing and my head hadn’t exploded. I was doing it! 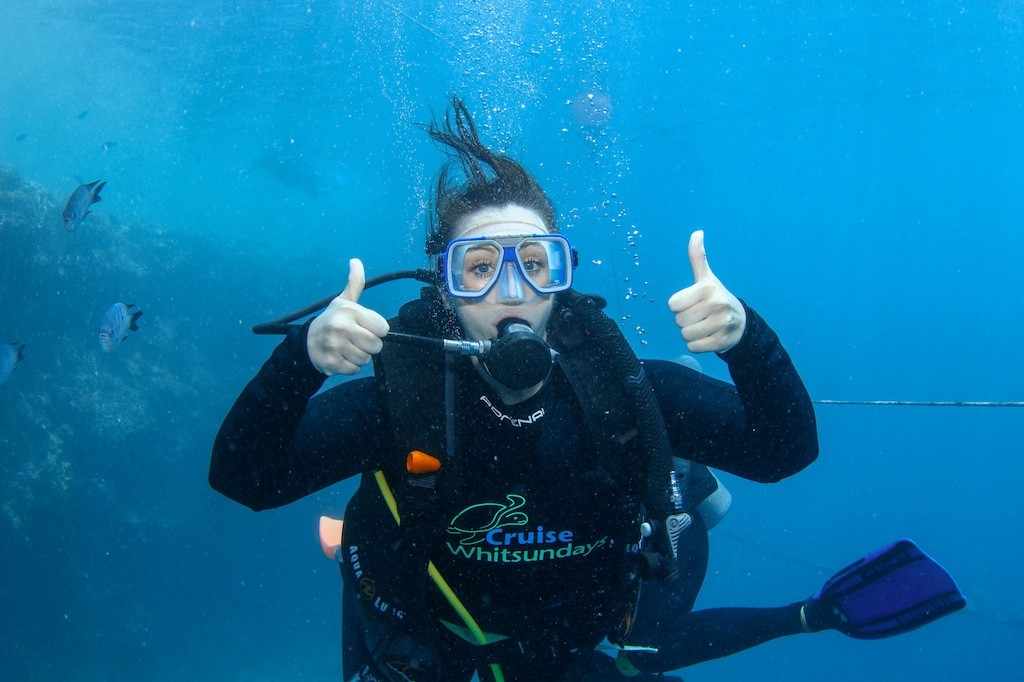 Me giving two thumbs up to SCUBA diving as Cassandra hides within arm’s reach! Photo captured by Reef Safari Photography

For 45 minutes we dived along the reef shelf. I’m not sure how deep we were but the reef was so beautiful it was a perfect distraction as I got used to be an underwater diver. Cassandra held my hand the whole time – you can see my shrivelled white paws in a few videos, maybe I was holding on a little too tight! She pointed out interesting fish and coral formations along the way so that I could attempt to photograph them, and then when I got quite cold in the deeper sections she tucked my whole arm under hers and attempted to share her body heat. Basically, she was a legend.

Soon it was time to pause for a photo and make our way back up to the pontoon. I climbed back on board fuelled with adrenaline and beaming from ear to ear.

Helicopter Ride Over The Reef

There was one last incredible experience at the Barrier Reef lined up for me – I was going to travel back from the pontoon to Hamilton Island in a helicopter. I’ve flown in a helicopter before and loved it so I was looking forward to taking this mode of transport. I hadn’t anticipated though quite how staggering the reef would look from the sky. Diving it was, of course, incredible but it was the view from above that really blew me away. 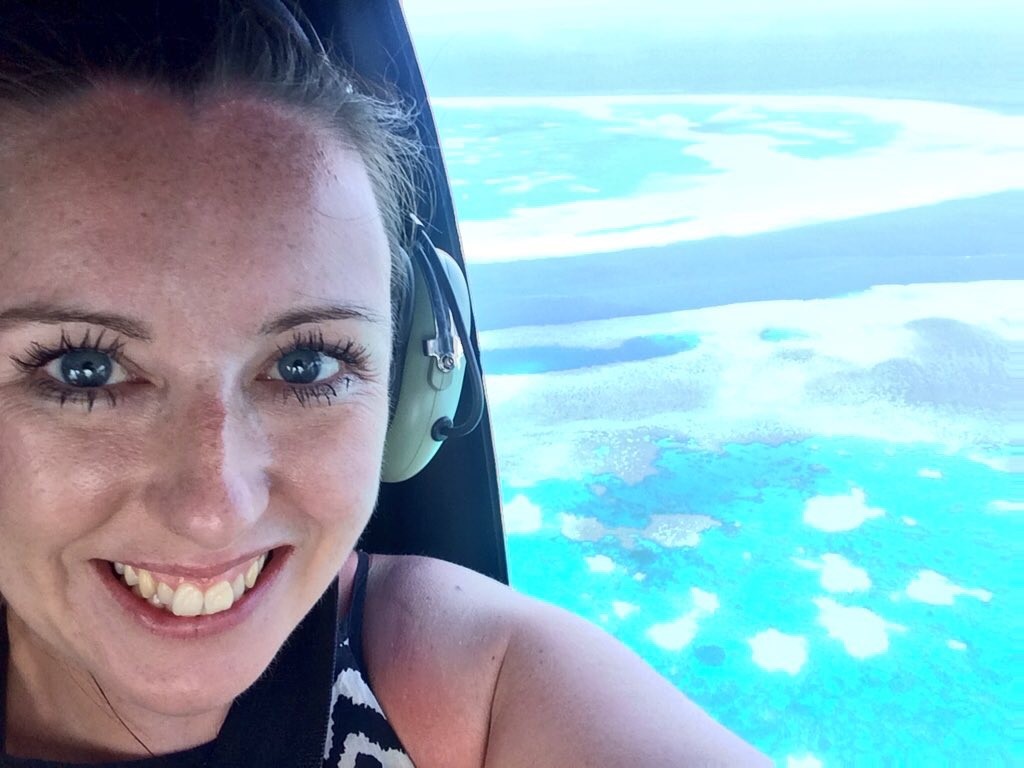 The reef looks incredible from the air

From the air you start to get a sense of the monumental scale of the reef and it’s so beautiful to see how the depths and formations change the colour of the water. I felt like an astronaut looking down onto earth, my eyes seeing countries in the coral.

Soon after take off from the tiny helipad at Reef World you fly over the most photographed section of the Great Barrier Reef. Heart Reef was discovered in 1975 by one of Air Whitsunday’s pilots and often features on many postcards and brochures promoting the region. We circled it twice so that passengers on both sides of the helicopter could see it from the optimum angle, and as we came around the second time the clouds parted and the water inside the love heart literally sparkled. The whole group sighed ‘wow’ over the internal communications system.

Now that I’ve had the chance to explore in, over and above the Great Barrier Reef I feel I can finally say I’ve seen the best of it. Don’t ask me to choose which was my favourite experience though. I couldn’t possibly pick just one of them.

Have you experienced any of the above adventures at the Great Barrier Reef? Which was your favourite? 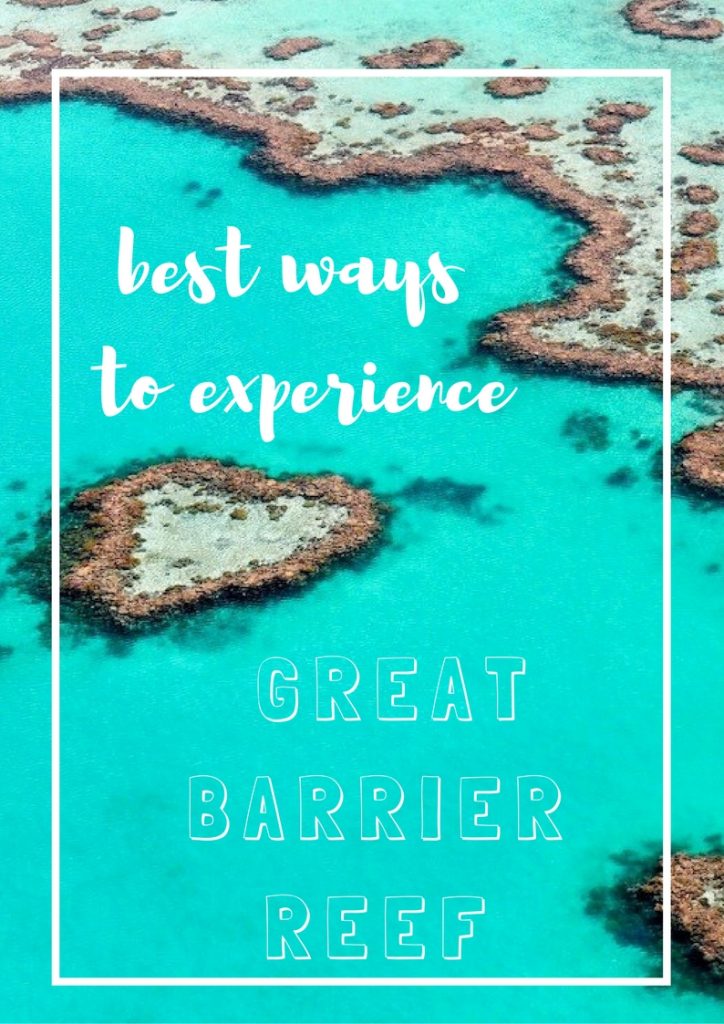 All the above experiences were arranged by Round The World Experts who can create bespoke Australia holidays including flights and accommodation. Visit their Australia Holidays page for more information and inspiration. 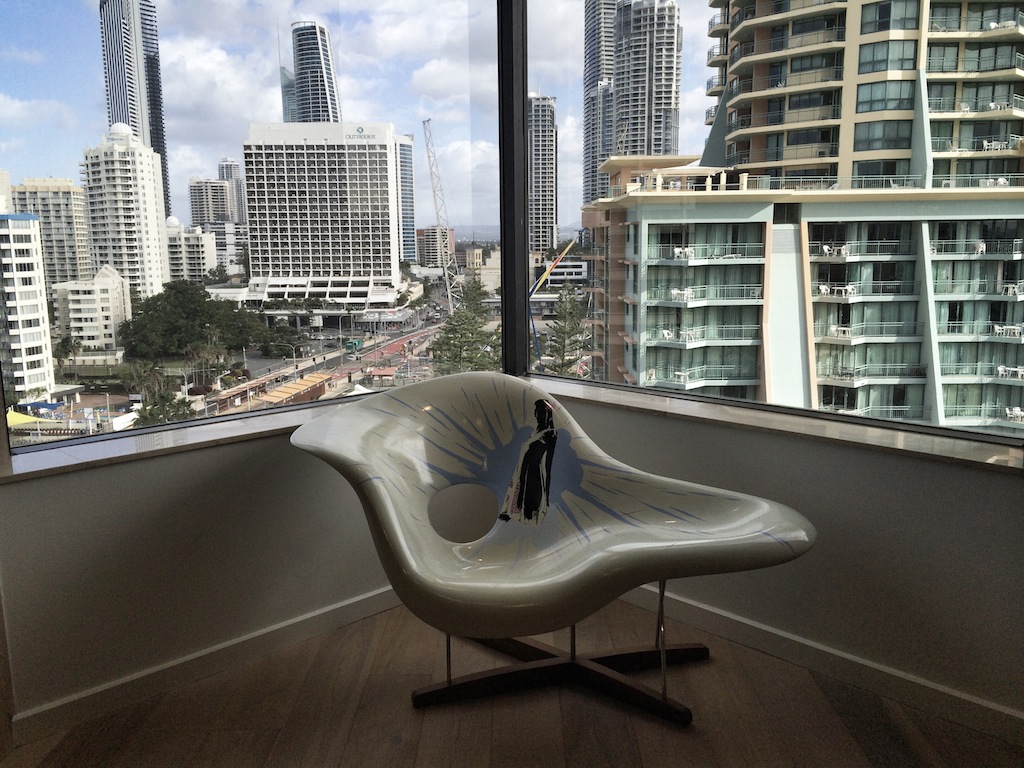 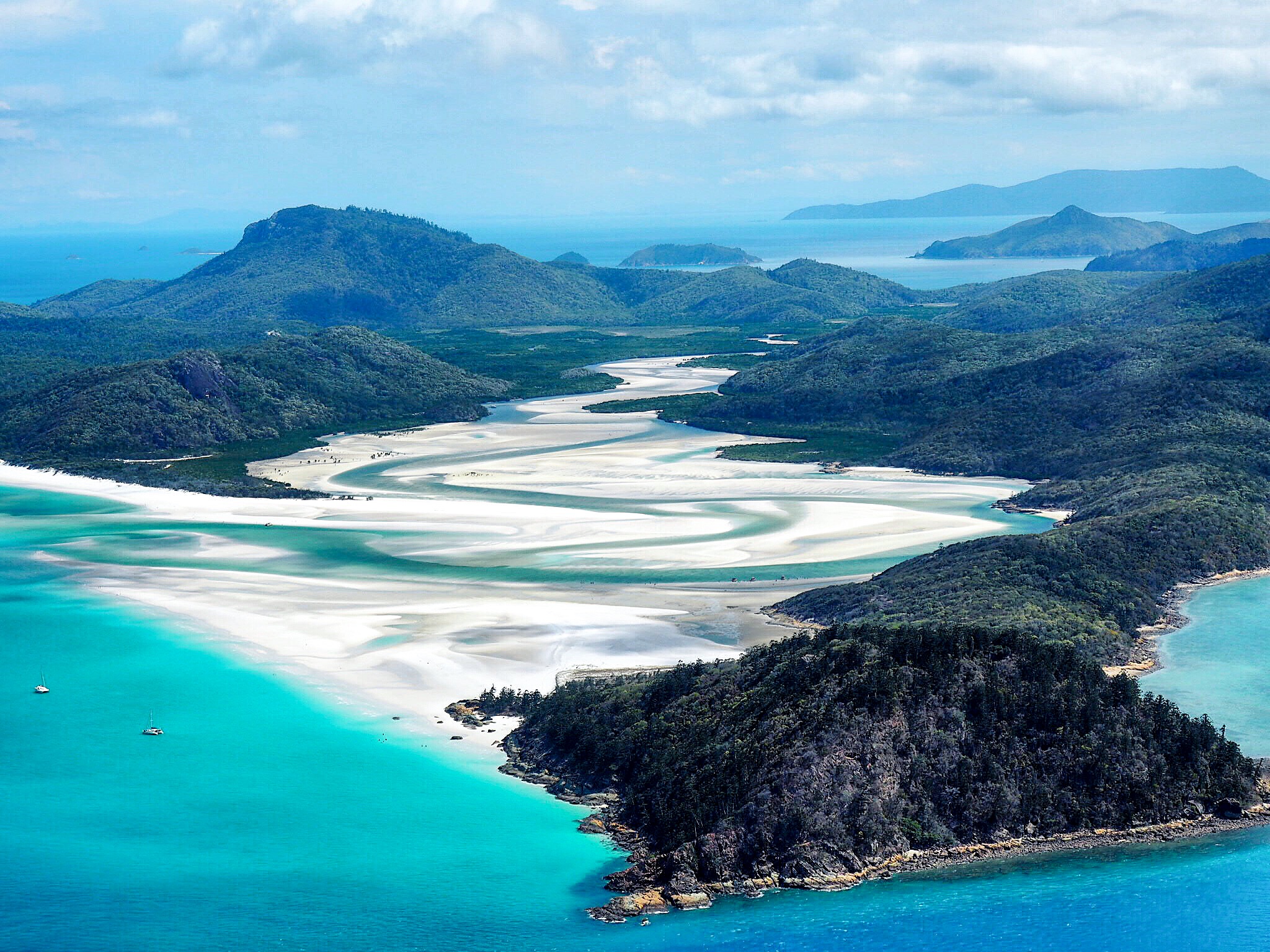 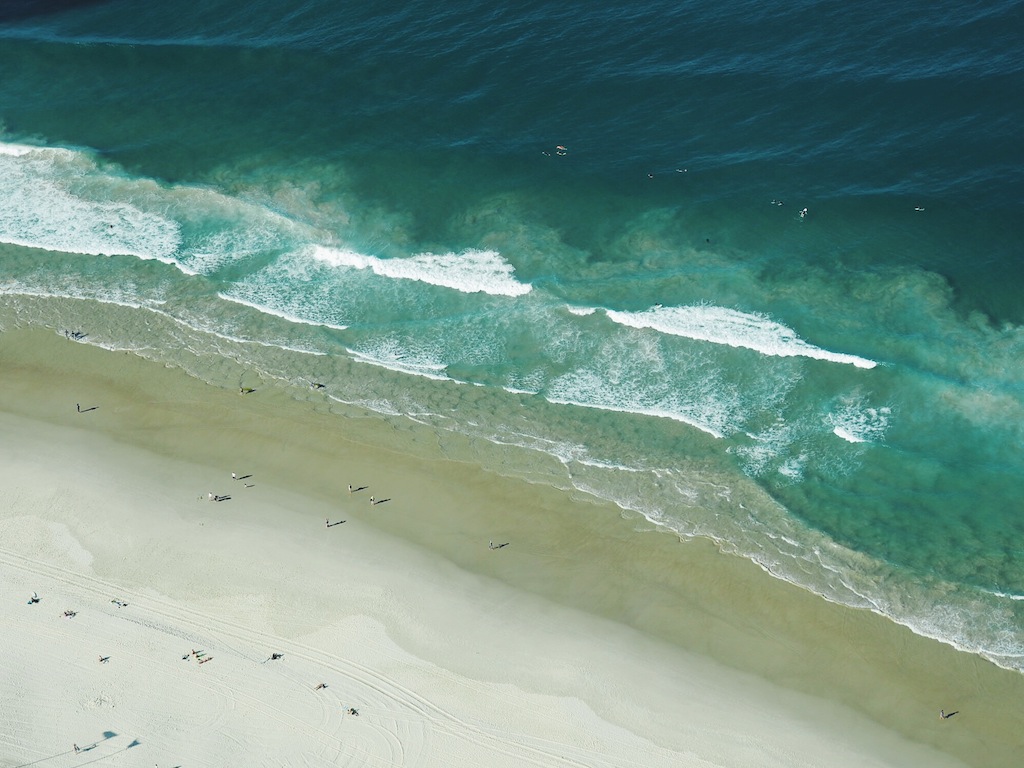 A Different Perspective On The Gold Coast

Travelling In My Twenties Versus My Thirties: What’s Changed?