A personal look at what it’s like to live in Melbourne compared to Sydney, now that I’ve spent more than a year as a resident in both.*

*3 years in Sydney and 1 year in Melbourne for those that lost count :p

Which city is better to live in – Sydney or Melbourne? My thoughts 1 year on. 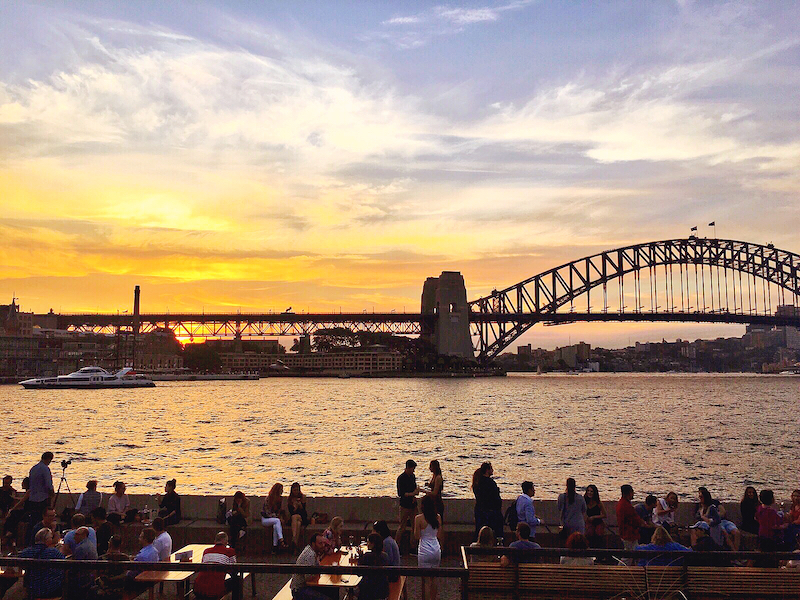 Melbourne does have the Sky Bus ($18 AUD one way to Southern Cross Station) but the fact that the traffic can be bad and Southern Cross is only part way home puts me off this option massively.

Airport trips aside, Melbourne is easier to get around because of the tram system which is 100% free within the CBD. Sydney is much prettier to commute across though, what with those harbour ferries and swish double decker trains that cross the Harbour Bridge.

I’d say that overall neither city has it nailed in terms of transport – Sydney needs trams and Melbourne an airport train – but thank goodness for Uber is all I say. 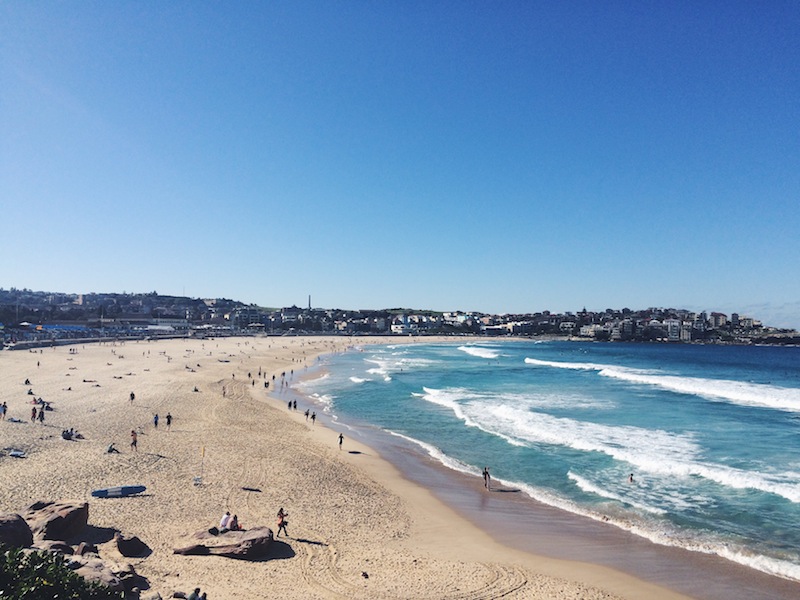 Winter at Bondi is the best

I was really surprised by how bitter a Melbourne winter can be. Although lows of 13 degrees would get called nothing by British and American friends, the winds in Melbourne can get so fierce it feels like you’re in a blast chiller.

At least in other countries houses are built to stay warm. In Melbourne we pump up the heater and the warm air gets blown straight out the drafty windows. My local cafes don’t have heating and often keep their doors open year-round – I am way too soft for that malarkey.

Aside from the Artic blast and occasional torrential downpour we do get many blue sky winter days in Melbourne, which makes it slightly less depressing. What is depressing is watching the national weather and seeing Sydney basking in 22 degree heat in August. That’s what us Brits move to Oz for, isn’t it? 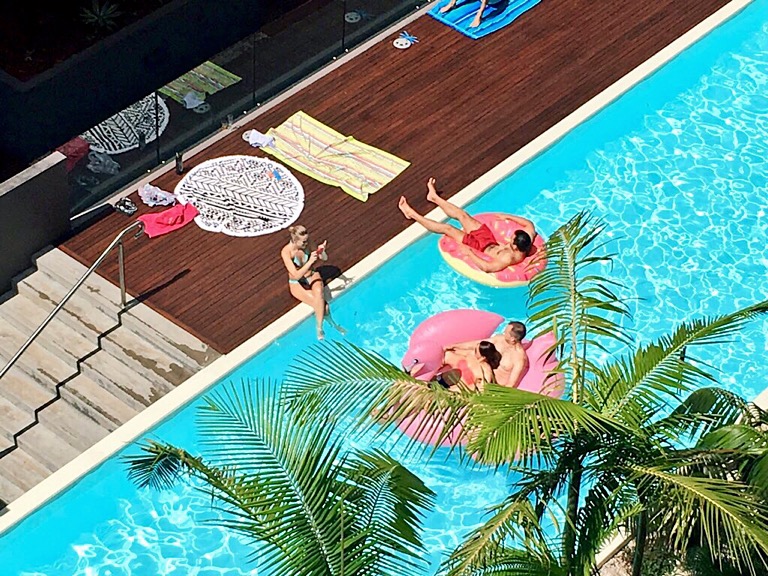 Having our own pool in Sydney was pretty cool

We found renting in Melbourne marginally more affordable than Sydney. We had a 1 bed plus study apartment in Sydney for $680 a week and moved to a 2 bed plus study townhouse in Melbourne for $700 a week. We gained stairs but lost a swimming pool. Renting was massively competitive in both cities and in Melbourne we didn’t get our first choice.

I can’t speak for the buyers’ market in Sydney or Melbourne but I think it’s fairly similar to renting in terms of price and competition – at least in the inner city suburbs we would want to live.

Moving to Australia? Here’s how to get set up and settled quickly 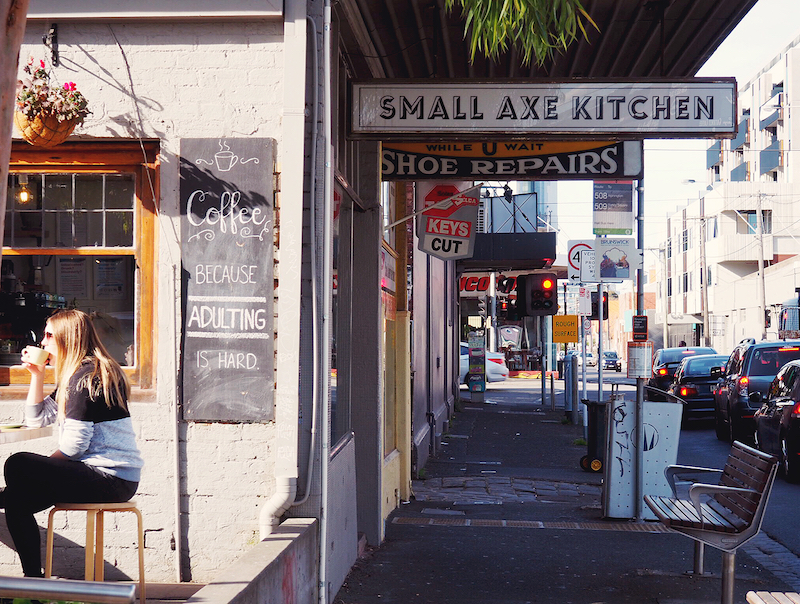 A coffee shop on literally every corner in Brunswick, Melbourne

We really struggled to decide what area to live in Melbourne because I was looking for some idyllic village-feeling neighbourhood with easy access to the city. We plumped for Brunswick because we had mates there and the transport to the city is awesome but it’s never given me the homely vibe I was hoping for.

In Sydney, I had the opposite experience and felt spoilt for choice when it came to chic places to live. If you don’t mind commuting by bus and/or ferry, some of the harbour and beach front suburbs are what an expat in Oz dreams of. I’d happily call Balmain, Kirribilli, Balmoral, Manly, Rose Bay, Bondi or Bronte home if the right place came up. With further research the closest I could find to these vibes in Melbourne was Elwood, but let’s just say that the beach is no Bondi.

Which Sydney suburb should you live in? 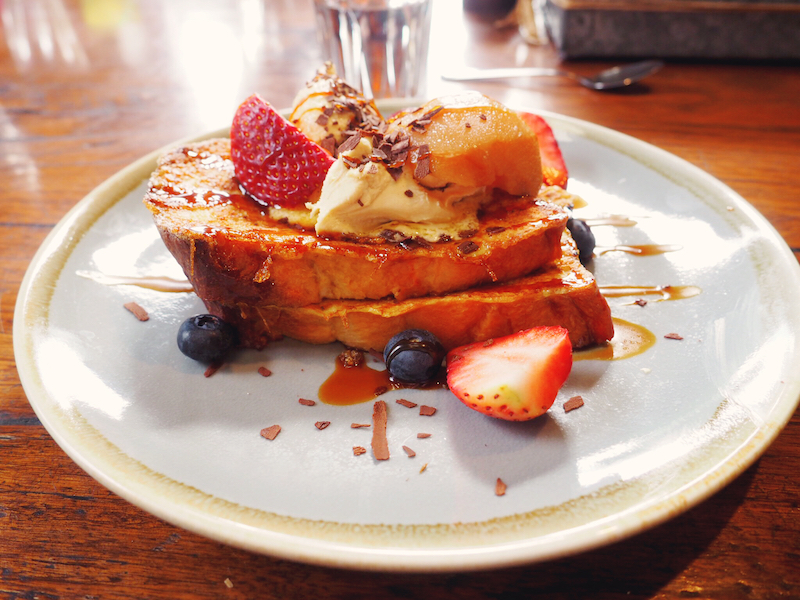 Every day I’m brunchin’ in Brunswick

Melbourne is oft considered the culinary capital of Australia and I’d have to agree that the range and quality of food is phenomenal. Sydney has its fair share of award-winning restaurants but they tend to be of the pricey variety. Melbourne, however, has got affordable Asian eats coming from its ears and there’s nothing we’ve enjoyed more than gathering all our mates for share plates at the likes of Hanoi Hannah.

On the slight downside is that all these trendy eateries in Melbourne often have me craving the simple things in life. (Can someone find this Brit a tuna sandwich!) This may just be a Brunswick specific gripe but we have so many vegan and Middle Eastern cafes on our doorstep and all I dream about is a schnitzel sandwich from the Italian deli that was across the road from our joint in Sydney. 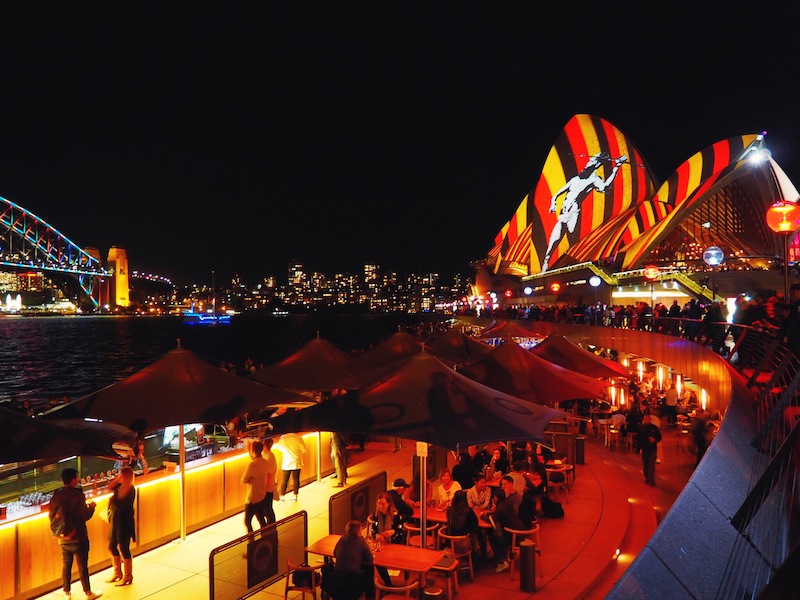 Our year in Melbourne has been filled with comedy. From Jimmy Carr at the Arts Centre to Tommy Little at the Melbourne Comedy Festival, we’ve enjoyed the big acts that have come through here. I also got a sneak peak of a few Melbourne Comedy Fest acts for free at Easey Street Concert Hall in Collingwood, which is something I’d never come across in Sydney.

On the other hand we did enjoy a few shows at the Sydney Opera House and could there be a more iconic venue for a musical or comedy performance?

This was something I never thought about until someone emailed me recently asking what the cockroach situation in Sydney is like as it was putting them off moving there. We did experience cockroaches in Sydney – I think at least 4 giant ones in our 3 years in Alexandria – but it was nothing a little bug spray couldn’t handle. Our building was regularly fumigated and we lived 3 floors up – not sure how those on lower levels get on in summer.

What did freak me out though was the bin chickens that roam Sydney. (I’d never seen a bird on the streets that looked like this before! ) In Melbourne our only issue has been ants, millions of them that have invaded every floor of our house every time we go away. Could just be bad luck though.

30 things you learn when you move to Australia 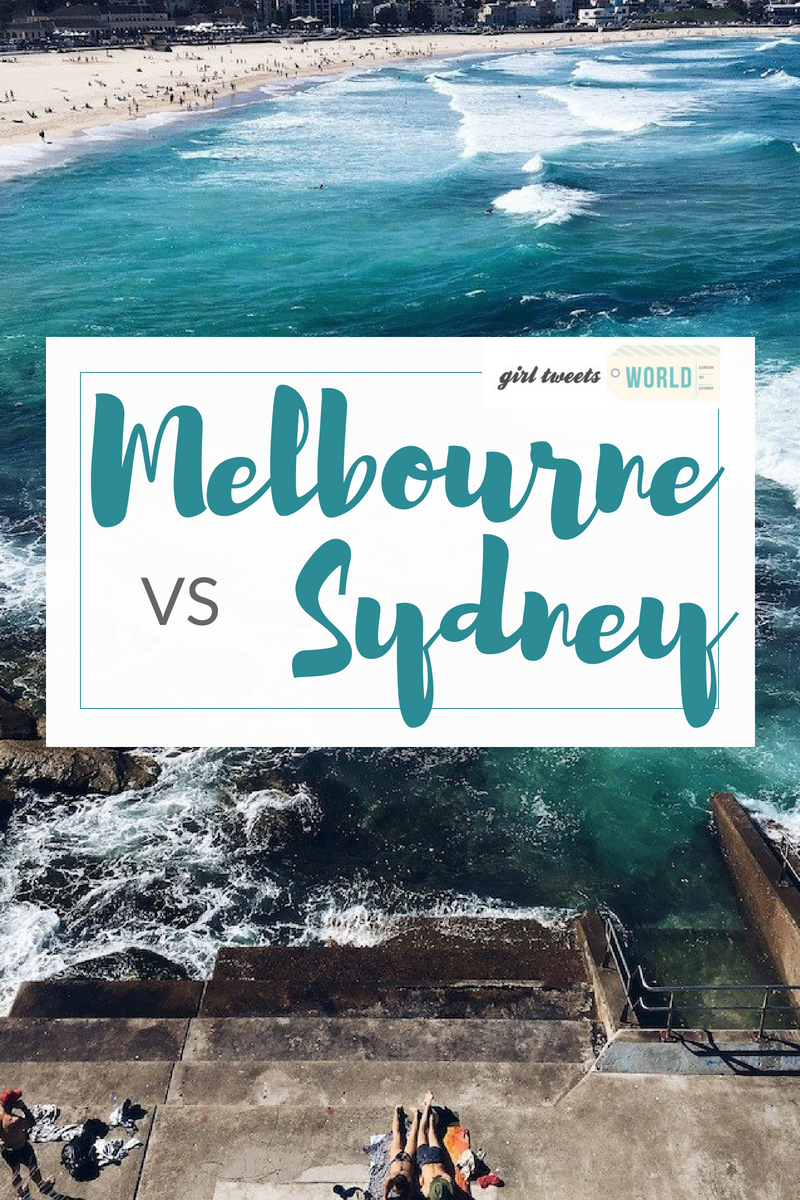 It will be hard for me to ever choose between the two cities as they do offer quite a different lifestyle. In Sydney, we embraced the coastal walks, loved exploring all the golden beaches and scenic nooks of the harbour and even got into the whole smoothie and acai bowl healthy lifestyle – I think the weather encourages it.

Melbourne reminds me a lot more of home, which has good and bad consequences. Good because I can dress more like myself (think: dark layers) and enjoy the change of seasons and bad because it’s a long way to move to feel familiarity. I enjoyed finding a different side of myself in Sydney and experiencing a lifestyle that’s very different to home, whereas in Melbourne I’ve probably spent more time trying to recreate feelings of home and ending up disappointed when the results were different.

Of course, the major factor in all this, however, is the number of friends and family we have in Melbourne. We moved here to spend more time with them and that has been the best thing about this past year – celebrating our niece’s 1st birthday party in a national park, taking Justin’s gran for lunch in the Yarra Valley and hanging out with his Dad and pet roo (sorta) at his place in remote Gippsland.

I’ll never be able to objectively assess whether it’s better to live in Melbourne or Sydney because one of these places is my husband’s home and this past year it became mine too.

Read next: The best things about being an expat in Australia 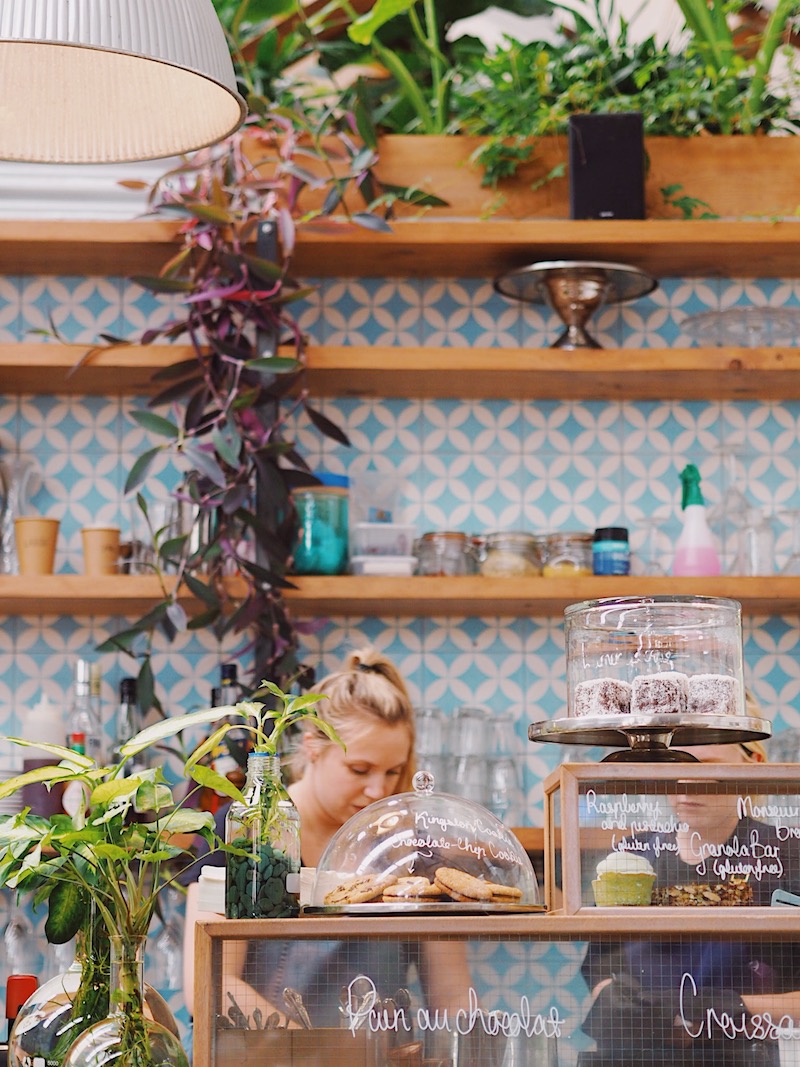 Why You’ll Want To Be Green in Brunswick, Melbourne

There’s Something About Bondi 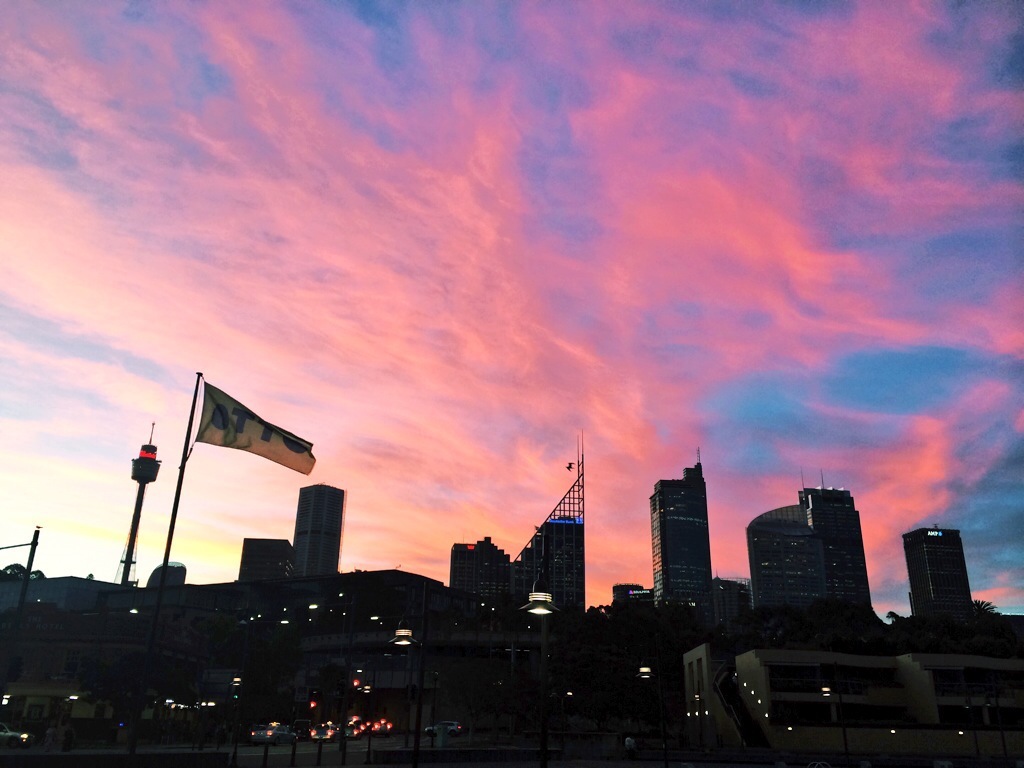 Simple Tips For Planning A Babymoon

So, Erm, Surprise. We’ve Moved Back To The UK!