If you’re a fan of finger-licking fast food and even faster rides there is plenty of fun to be had in just 48 hours in Osaka. I’ve put together this mini travel guide to the bustling Kansai City based on my recent Japan visit.

What to do in 48 hours in Osaka 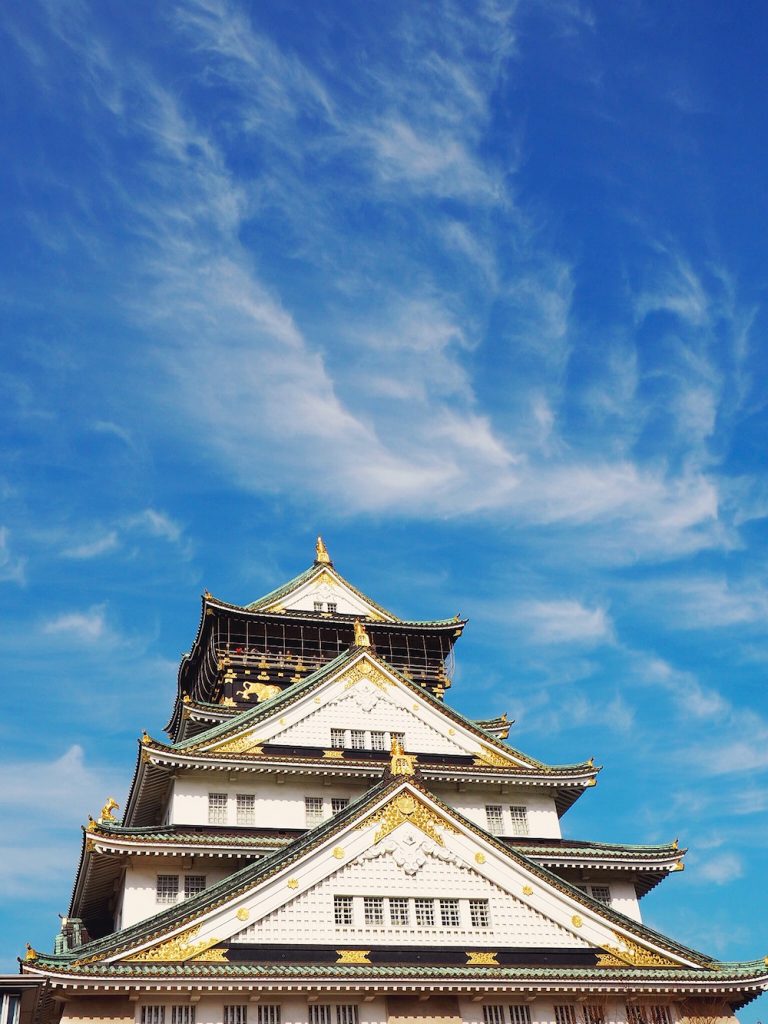 I started my Osaka explorations with a visit to its 5-storey, sparkling castle. Since its construction in the 16th century the castle has faced turbulent times, including the Summer War in Osaka in 1615 and being struck by lightning in 1655. It looks almost immaculate today though thanks to reconstruction in the 1930’s and the fact it is now listed as a Registered Cultural Property.

Inside the castle are a number of exhibitions that explain its history, including some interesting animations and artefacts relating to Hideyoshi Toyotomi who ordered the castle’s construction.

The 8th floor is an open-air observation deck, which offers 360 degree views of Osaka as well as a closer look at the castle’s golden statues. 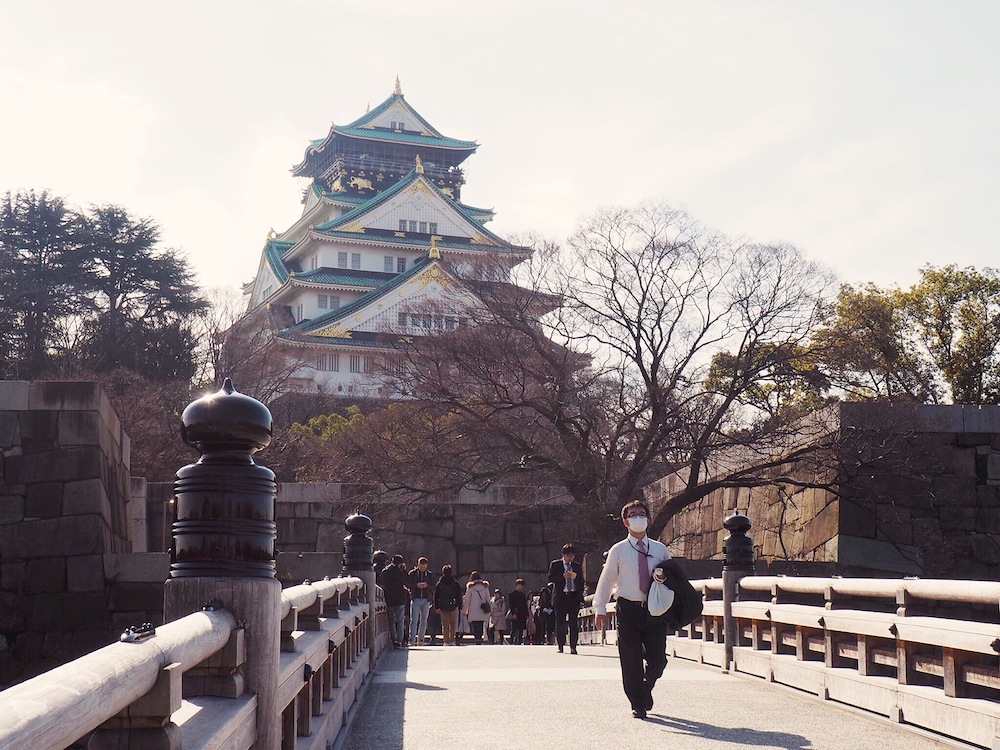 Surrounding the castle is a moat, gardens and the Gokuraku Bridge. There are also a handful of food trucks and buskers directly in front of the castle so I decided to stop here for lunch and tucked into a steamed pork bun and banana soft serve ice cream. (Never mind that it’s winter, it’s always soft serve season in Japan!) 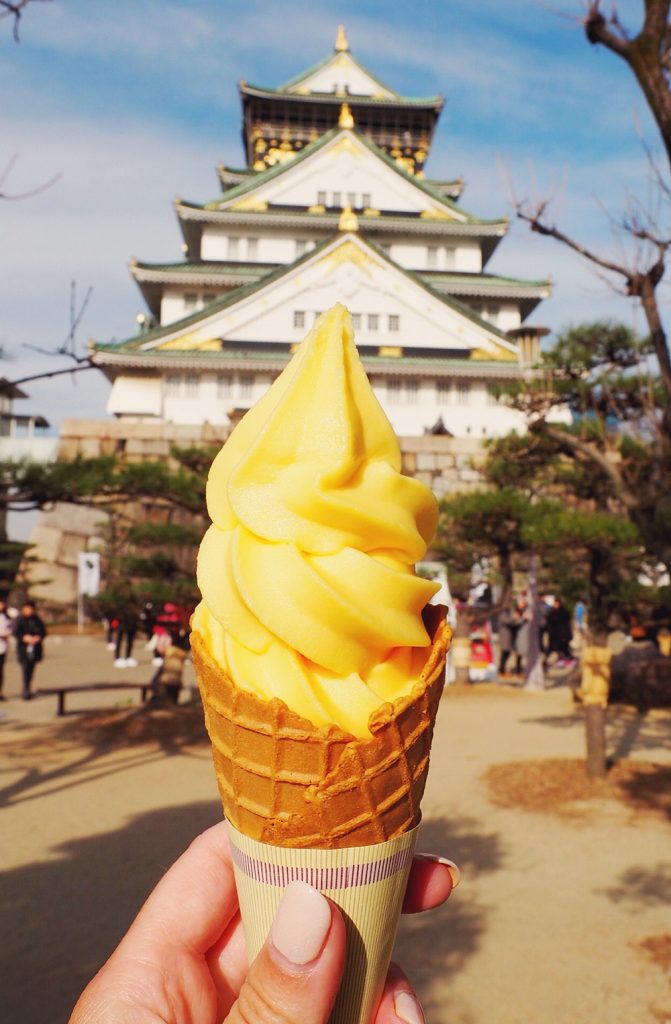 Notes: Entry to the castle costs 600 yen per person. My lunch was around 900 yen.

Eat your way around Dotonbori 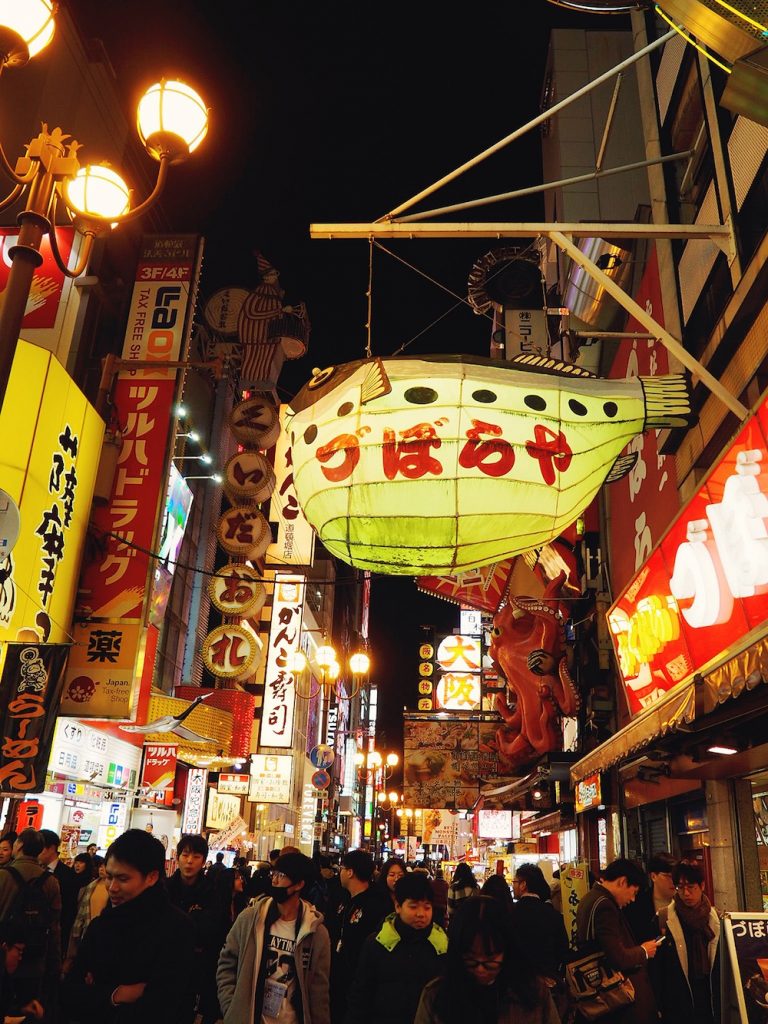 In the afternoon I headed to Dotonbori, which is Osaka’s foodie mecca and when I say it’s big on food I mean literally. Large-scale models of octopus, crab and fish loom above the stalls and restaurants that specialise in these dishes. There’s a huge amount of choice but I found the best tactic was to join any queue I saw and see where it led me.

Queues were extra long for Kani Doraku (the crab joint), Zuboraya (famous for fugu) and Kinryu Ramen so I joined a group of teenagers who were waiting for Japanese fried chicken. You can choose from about 12 different toppings but Japanese mayo is my pick, every time. 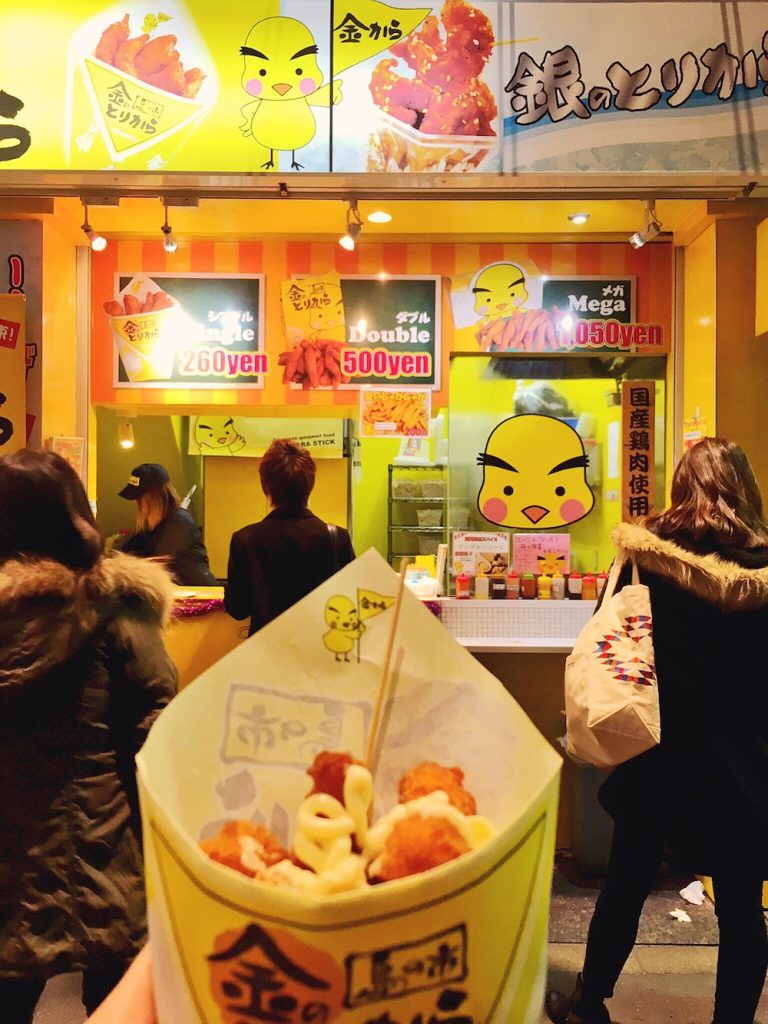 Top Tip: It’s considered rude to eat whilst you walk. Whilst wandering down the street with my fried chicken a voice came over the loud speaker announcing that visitors should eat their food outside the shop they purchase it from. I did wonder what everyone else was hanging around for! Ooops! Read more about cultural etiquette in Japan.

For dessert, I queued up for egg tart and it was absolutely delicious – the Japanese do pastries so well. 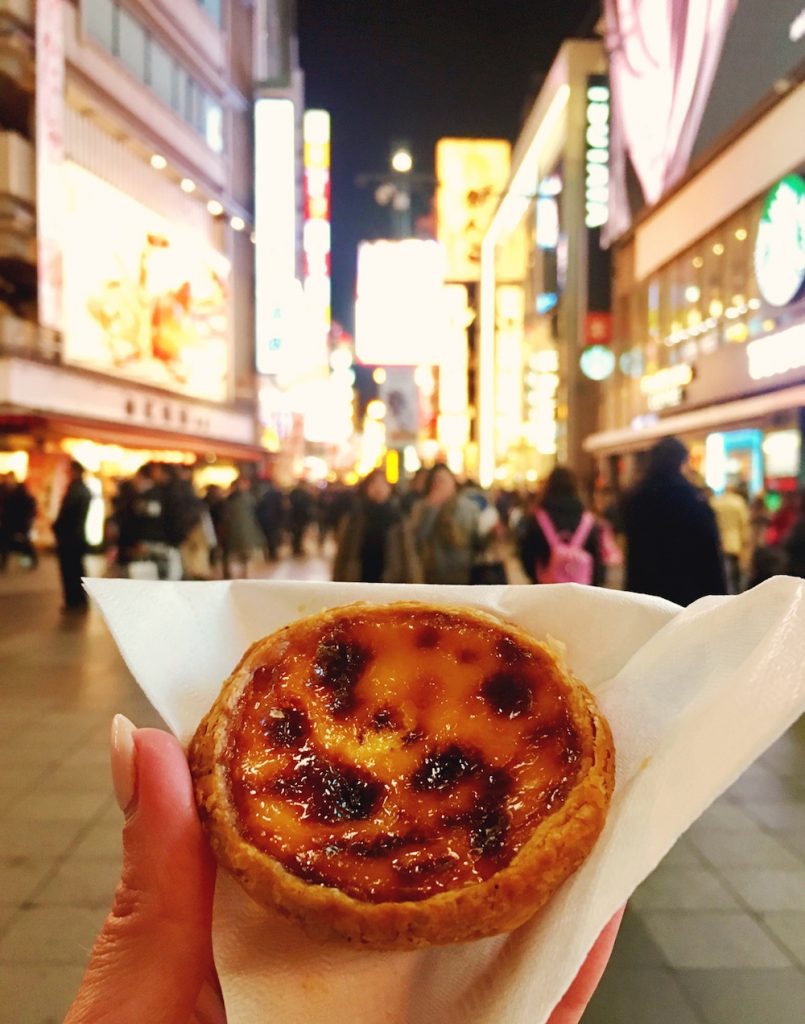 Also in Dotonbori is the Shinsaibashi Shopping Arcade, a 600 metre long stretch of high street fashion and bargain basement shopping. I visited on a weekday evening and as you can see from the picture it was heaving. You kind of have to jump into the middle of the crowd and go with them! 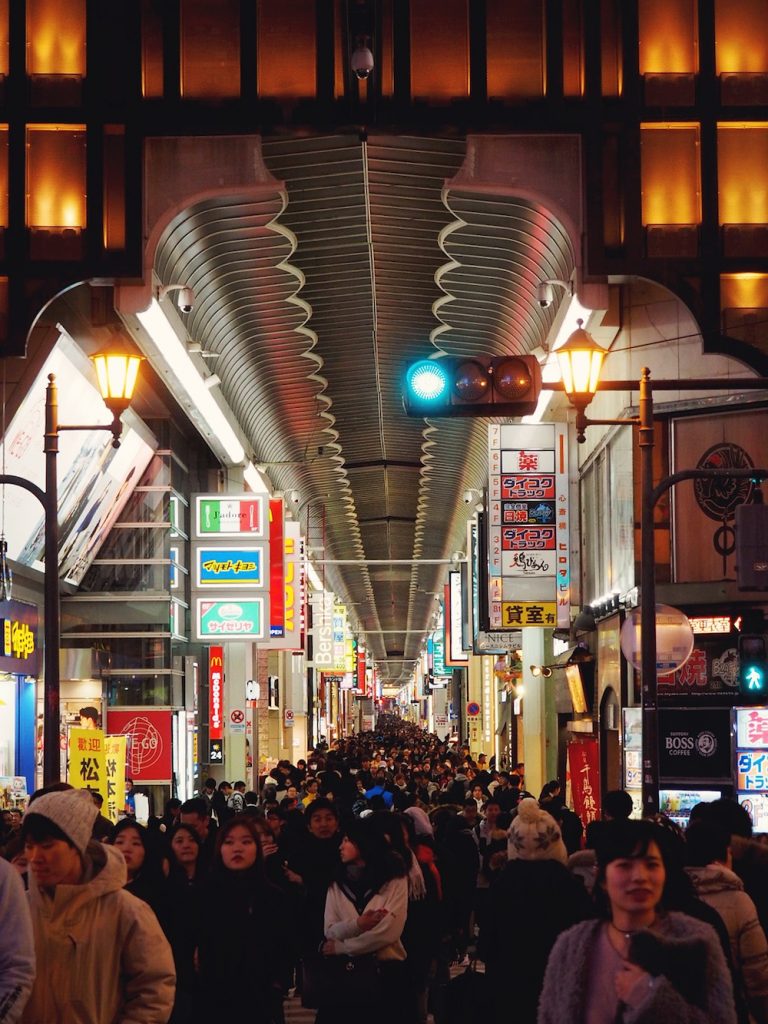 A big photo spot in this area is the Dotonbori canal as the neon lights of the surrounding shops and billboards reflect off the water. The stand out sign is the giant running man, who was installed as an advertisement for Glico Candy in the 1930s but has gone on to become a symbol of Osaka. (He was definitely the most wanted selfie buddy for all the Japanese visitors.) 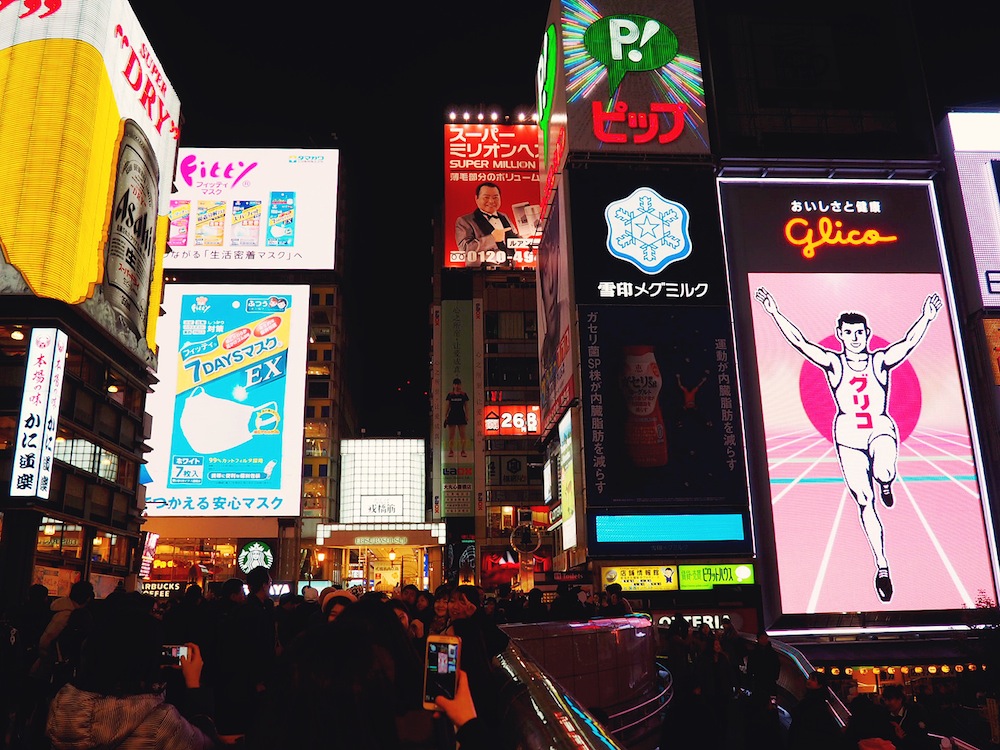 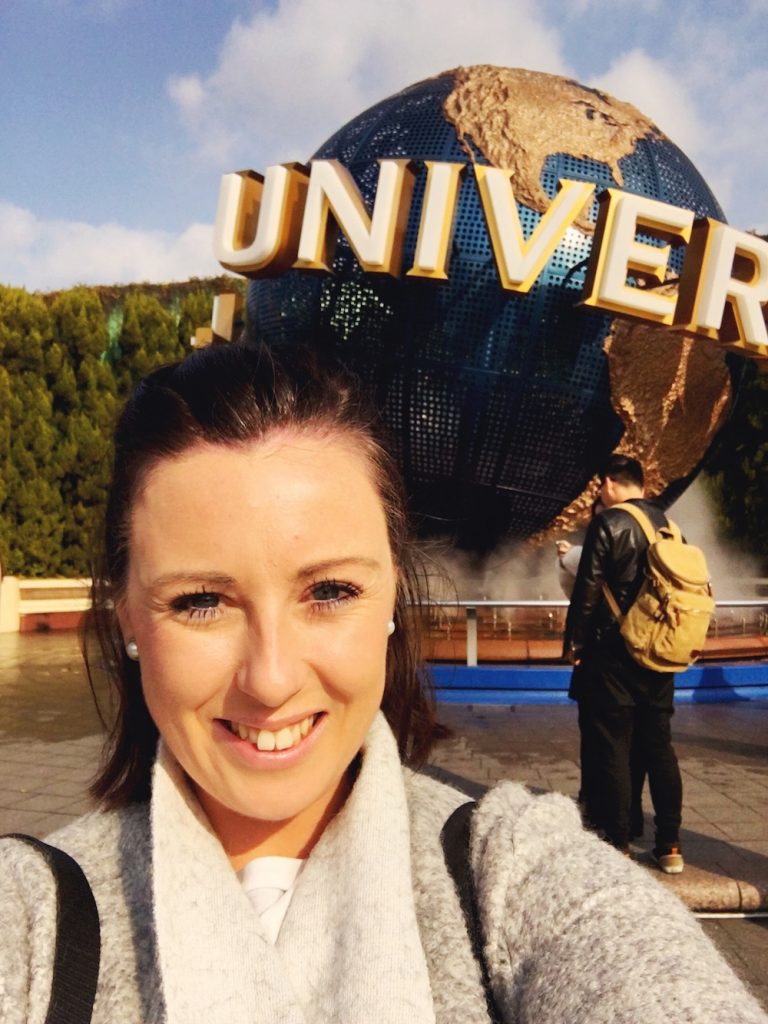 My second day in Osaka was dedicated to the thrills and movie reels of Universal Studios Japan. There are a couple of things that make USJ unique from its counterparts. Firstly, it’s currently hosting a Universal Cool Japan event, which brings famous Japanese manga to life. My favourite ride (Evangelion) uses mind-blowing XR technology – think: a virtual reality headset on a rollercoaster that makes you convinced giant angels are coming to get you!

There’s also a Godzilla 4D attraction, which shows the God Of Destruction tearing through the parts of Osaka I mentioned earlier, and a real timed escape game based on the Detective Conan anime. 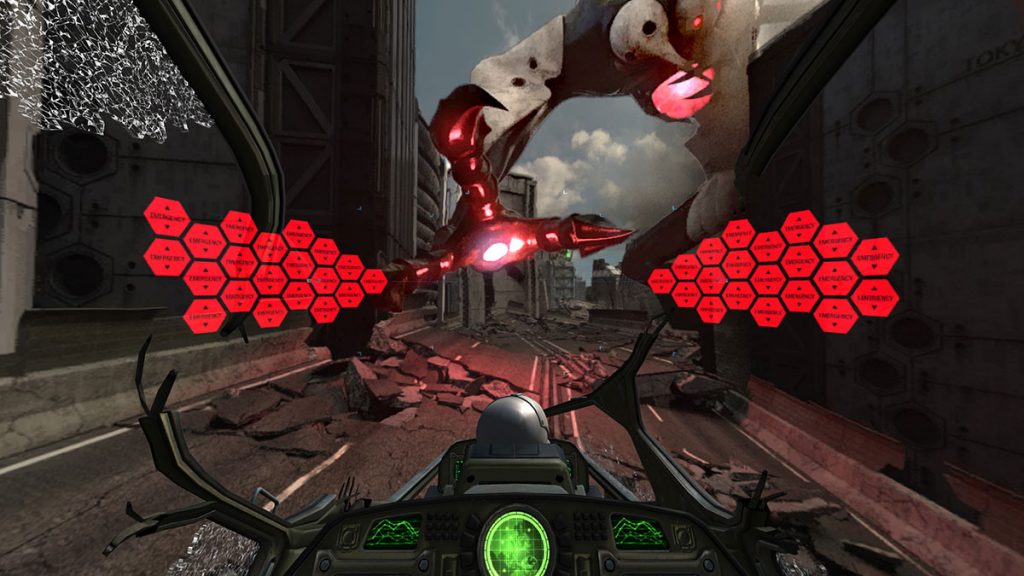 I loved that each of these special rides had their own matching snacks. My sweet treat of choice was a Minions Hot Chocolate, which is a teaser for the Minion Park (the world’s largest) that will open later this year. 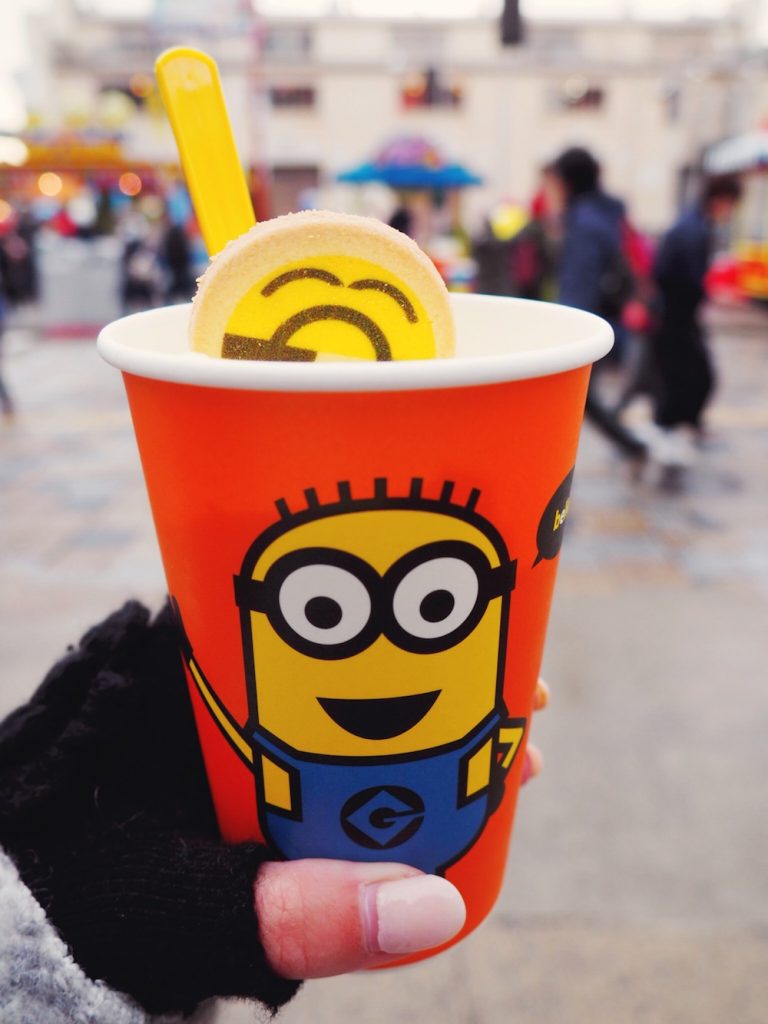 My favourite area of the park was the The Wizarding World of Harry Potter™ – it was so realistic you could almost start to believe in magic! The Hogwarts Castle at USJ is extra special because it is surrounded by the mystical looking Black Lake – it’s counterparts elsewhere don’t come with this mesmerising reflection. 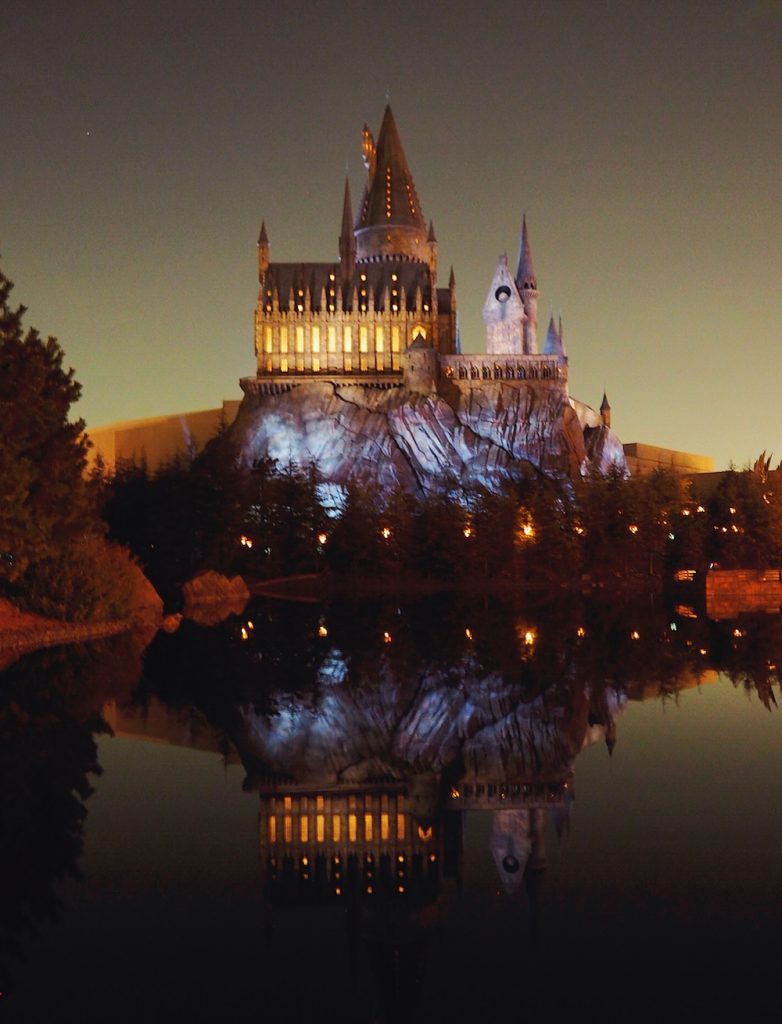 As a fan of big thrills I loved all the major rides at USJ. If you’re an adrenaline junkie like myself though make sure you don’t miss The Flying Dinosaur, The Amazing Adventures Of Spiderman, Harry Potter and the Forbidden Journey™ and Evangelion – that XR ride I mentioned earlier with the giant angels. 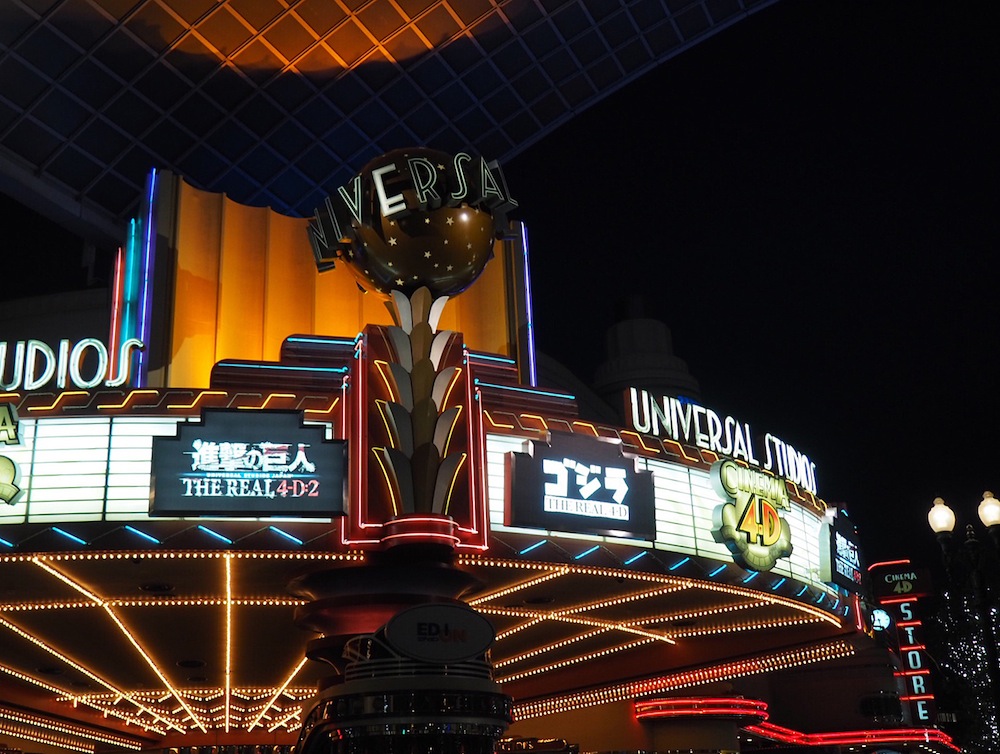 Notes: A 1 day Studio Pass costs 7,400 yen for adults and 4,980 yen for children. To shorten your wait time at some of the parks more popular attractions you can buy a Universal Express Pass for 3, 4 or 7 rides.

Where To Stay In Osaka 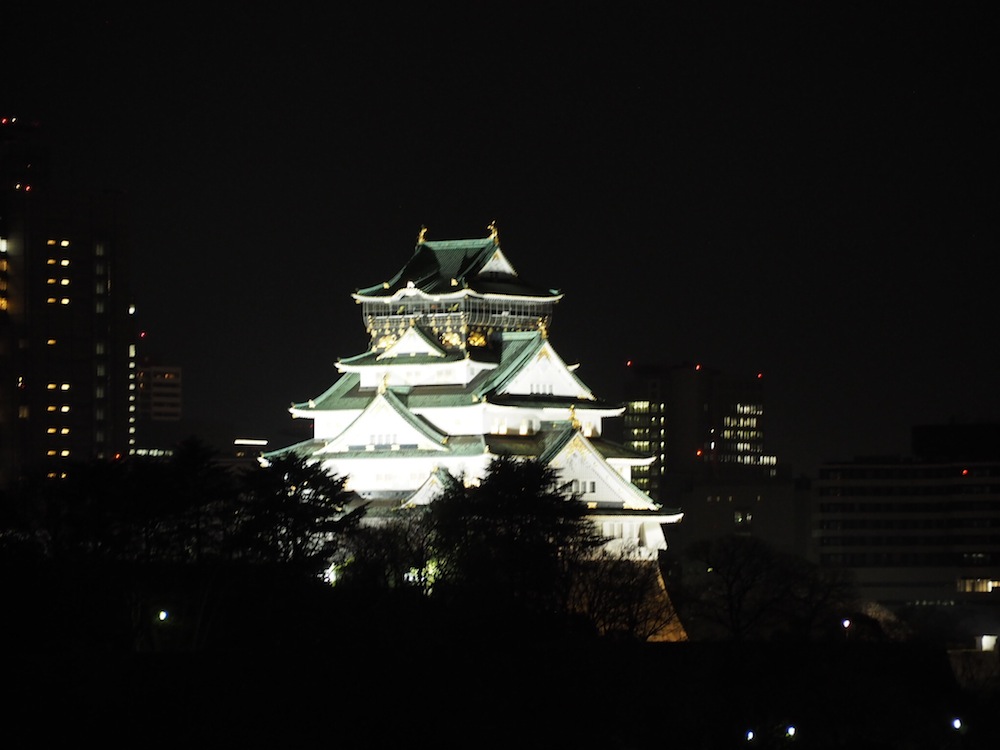 I stayed at the elegant Hotel New Otani which is a 5-star hotel with spacious rooms and enviable views of the castle, especially when it’s lit up at night. Osakajoken Station (on the Osaka Loop Line) is just 5-minutes away by foot so it’s a great place to be based. There’s also a luxury shopping mall, bakery and strawberry themed afternoon tea all found in the hotel.

It’s super easy to get around Osaka on public transport. The Kansai International Rapid Express connects to the Osaka Loop Line so if you’re staying somewhere like Hotel New Otani you won’t even have to change trains.

For Osaka Castle – Take the Osaka Loop Line to Osakajokoen Station. The castle is approx. 15 mins on foot from the station – it’s a pretty walk through the gardens.

For Dotonbori – The nearest station is Namba. I went the wrong way when I first came out of the station. Ask someone to point you in the direction of the canal if you need help getting your bearings.

For Universal Studios Japan – The theme park has it’s own subway station – Universal City Station. It takes about 30 minutes to reach from central Osaka. 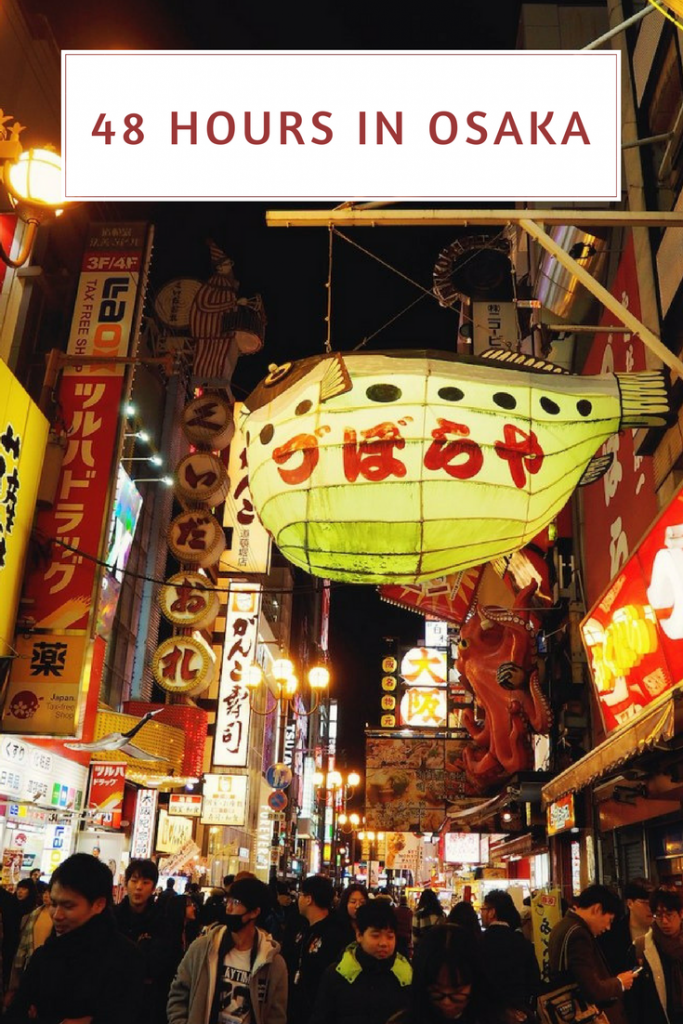 Why you should visit Universal Studios Japan

5 things you need to know before visiting Japan

Japan Bucket List: Places and experiences not to be missed 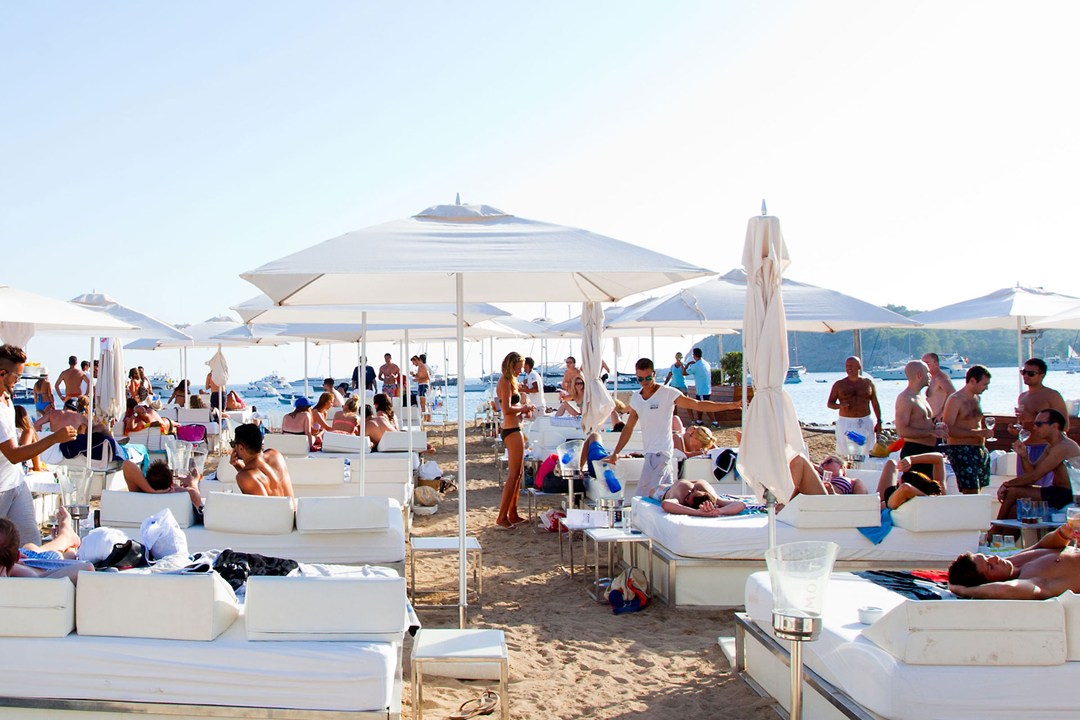 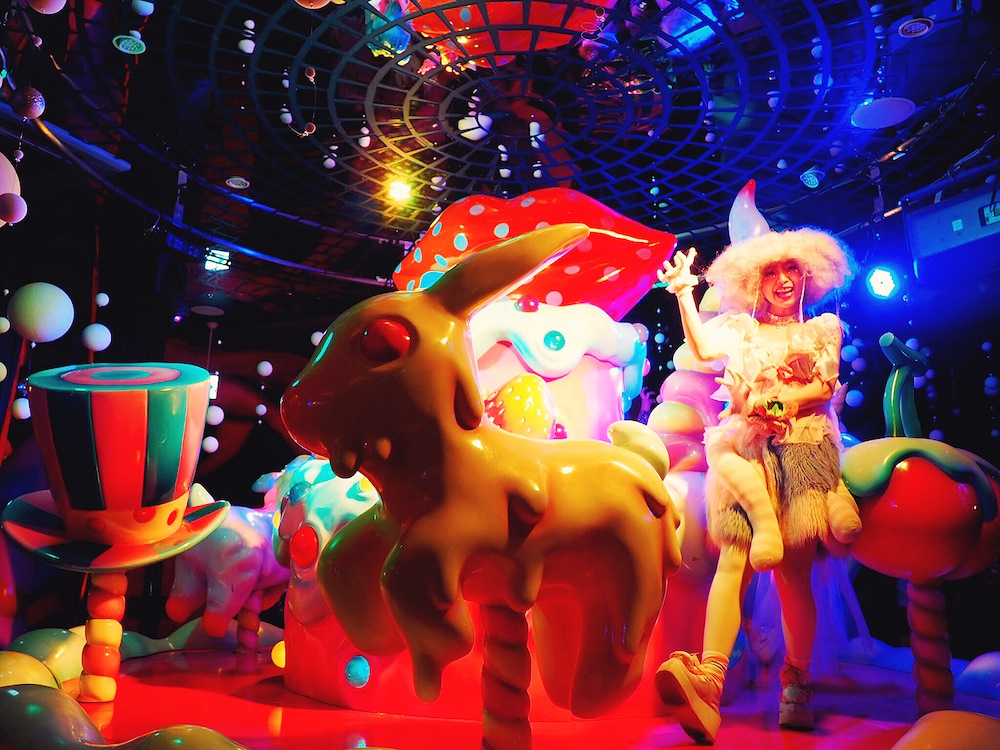 My 7 Biggest Fails In 7 Years Of Travel Blogging